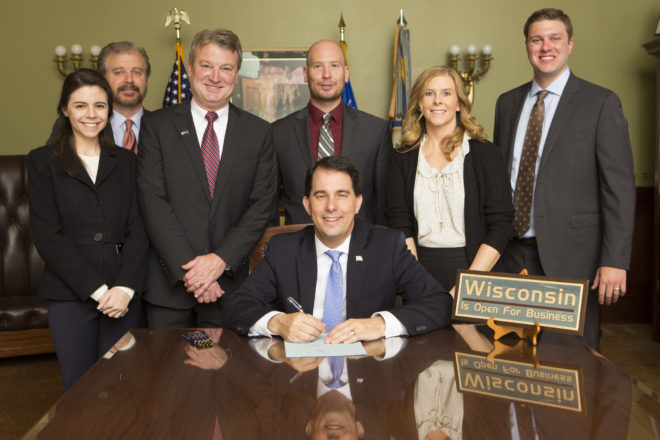 Rep. Kitchens and Senator Robert Cowles released the following statements after 2017 Assembly Bill 226, the Clean Water Access Bill, was signed into law as 2017 Act 69:  “I am thrilled that the Clean Water Access Bill was signed into law earlier today by Gov. Walker,” Kitchens said. “This crucial piece of legislation will provide relief to families across Wisconsin and access to clean water, a basic right most of us take for granted. The water contamination issues plaguing Northeast Wisconsin have no simple fix, but this bill provides vital and immediate assistance to those affected today. I will continue to work toward comprehensive solutions to the situation we are in, but this bill must not be undervalued. I know many counties and families across the state are eager to take advantage of the benefits it provides. I want to thank my conservation departments, as well as all the nonprofit groups and farmers who supported this bill. My greatest thanks goes to Sen. Cowles for his relentless perseverance in aiding with this bill.”

Senator Cowles added, “Access to clean drinking water is vital to human health, and today’s bill signing provides hope to those who don’t have easy access to clean drinking water. The Clean Water Access Bill is not a cure-all silver bullet, but assistance in replacing failing septic tanks and contaminated wells is an important step forward for the residents of Northeast Wisconsin. Drafting and passing this bill would not have been possible without the hard work and continuing dedication of my co-author, Rep. Kitchens. It was my pleasure to work with him on this important piece of legislation.”

The Clean Water Access Bill increases the grant amount that may be awarded under an existing state program for rehabilitating or replacing contaminated wells. The legislation also gives local governments the authority to provide low-interest or interest-free loans to the owners of contaminated wells or failing septic systems. The signing of Act 69 into law will complement the DNR’s revisions on Administrative Rule NR 151 and DATCP’s revisions on ATCP 50 in addressing the underlying problem of water contamination in Northeast Wisconsin. The Clean Water Access Bill is supported by local governments and health departments, farmers and conservation groups.

Rep. Gallagher co-sponsored the Honest Ads Act (H.R. 4077), a bipartisan piece of legislation that seeks to increase transparency and accountability for online political ads. The bill would require firms, such as Facebook or Twitter, to disclose who is buying ads on their platforms in order to protect the United States from foreign actors attempting to interfere in our elections. After signing on to the bill, Gallagher released the following statement:  “Our democracy is predicated upon the legitimacy of our elections. As technology and the digital world continue to evolve, our enemies have found new ways to infiltrate and disrupt our democratic process. This bipartisan bill is a concrete step that I’m proud to take with my colleagues in Congress to strengthen our national security and push back against the type of foreign aggression we experienced during the 2016 election.” The Honest Ads Act requires digital ads to meet the same disclaimer requirements as print or broadcast ads. It also subjects the largest online platforms, such as Facebook and Twitter, to similar transparency and reporting obligations as required of broadcast, cable and satellite providers that sell political ads.

Sen. Baldwin is asking questions and seeking answers from PNC bank about its role in the closing of Appleton Coated in Combined Locks. “Today, 500 workers are without jobs in Combined Locks. Another 120 don’t know if their next paycheck will be their last. The closure of Appleton Coated has affected the Fox Valley deeply, pulling millions of dollars in economic output from a region that has lost 1,300 jobs since August,” Baldwin said. “While restoring jobs as quickly as possible is the first priority, I am deeply troubled by what I have learned about the events that led to Appleton Coated’s closure. There appeared to be multiple options to keep the plant open yet PNC Bank refused them. I want to know why the bank appears to have chosen a short-term profit at the expense of Appleton Coated, its workers and their families. Our community needs answers.” The paper mill, which employed about 620 workers, went into receivership Aug. 17 and was sold Oct. 10 to Industrial Assets Corp. after a series of court hearings. The mill is currently idle, with minimal staff maintaining the facility. Baldwin, in a letter sent to PNC Bank chair, president and CEO William Demchak, asks a number questions about the bank’s role in the closing and lost jobs.

Buried in a New York Times piece seeking to explain why President Donald Trump is defending embattled Senate candidate Roy Moore in Alabama is this eye-opening paragraph:  “He sees the calls for Mr. Moore to step aside as a version of the response to the now-famous Access Hollywood tape, in which he boasted about grabbing women’s genitalia, and the flood of groping accusations against him that followed soon after. He suggested to a senator earlier this year that it was not authentic, and repeated that claim to an adviser more recently. (In the hours after it was revealed in October 2016, Mr. Trump acknowledged that the voice was his, and he apologized.)”

In case you took up residence on another planet last fall, the existence of the Access Hollywood tape – in which Trump can be heard telling Billy Bush that women let you do anything to them when you are a “star” – was first reported by The Washington Post in October 2016. It immediately set off a firestorm in the presidential race, with scads of Republican elected officials rescinding their support for Trump and calling on him to leave the race. He, of course, did not. What he did do, however, was apologize for the comments – writing them off as “locker room talk.” Trump did not then contest the authenticity of the audio recording. Neither did Billy Bush or anyone else associated with the incident. But, apparently, Trump now believes that, somehow, the tape is either false or has been doctored.