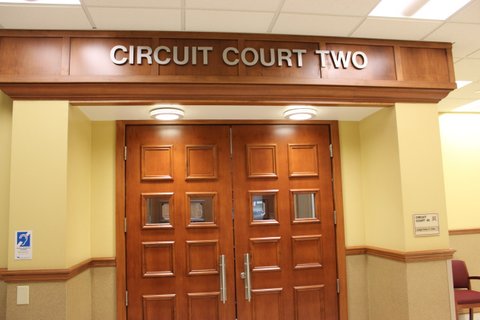 While Peter Diltz is looking forward to his new life as a private citizen, he does so with happy memories of his colleagues in the Door County judicial system.

“I had been thinking about retiring the last three or four years, but I never felt right about it,” he said. “It makes it hard to leave when you have great people to work with. I’ve got a great court reporter who has been with me for 10 years (Holly Jewell), and a great judicial assistant who has been with me 17 years (Linda Wiegand). The county gave us a great facility. It’s been hard to give it up.

“Judge Todd Ehlers and I have been together 16 years,” Diltz continued. “Our offices are right next to each other. We’re great friends. We both felt fortunate to have somebody to talk to. There’s a lot of administrative and policy type stuff you have to do. We’ve had very few meetings between the two of us. We’ll spend two or three minutes talking about something, and it’s done. That’s the extent of our meetings. That’s pleasant. I’m going to miss working with Judge Ehlers.”

Diltz said he and Ehlers began something when Ehlers joined the bench 16 years ago that they called Judges’ Meetings.

“We invited any department heads, or anyone who wants to talk about something, but don’t feel obligated to come,” he said. “It was about every six weeks. Bring a lunch or we’ll order out. Sometimes there’s really substantive stuff, and other times it’s just social. You leave and three minutes later you’re in court with the same DAs and you are disagreeing with what they’re saying. It created a situation where everybody realized they have their own role. It’s worked well. I’m sure they’ll continue doing it. People keep showing up for them and we made it pretty clear we won’t be offended if you don’t show. It humanizes the whole process with all the people you’re working with. You’ve got your own roles and everything but that doesn’t mean you have to be antagonistic or separate and isolated from each other.”

“Peter and I worked together for 16 years. We’re always close to those we work with,” said Judge Todd Ehlers. “Not only did I consider Peter to be my mentor, someone who I learned a lot from over those 16 years, somebody that I felt comfortable with in a difficult case or a difficult day, it was nice to be able to walk across the hall and talk about those things.

“On a personal level, Peter and Kathy became my wife and I’s closest friends. They became parts of our children’s lives,” Ehlers continued. “I know our friendship isn’t going to change. I won’t be seeing him daily to get his doses of humor. Things will change, but I know we will continue to be close. In addition to developing the professional relationship, I thanked him from the bottom of my heart for the friendship we developed. That’s the best part of this whole relationship I’ve had with him the past 16 years.”

Since Diltz’s retirement on May 11, reserve judges have been filling in, including retired judges Bob Hawley and Joe Troy.

“It’s going to be a little hectic around here the next couple of months,” Ehlers said. “We’re trying to fill in the gaps with reserve judges and Court Commissioner [Jennifer] Moeller is helping with some things. But I’m optimistic the Governor will make an appointment soon and fill his seat. We’ll muddle through it and I know the Governor will make a capable and competent appointment, not that anybody can replace Judge Diltz.”