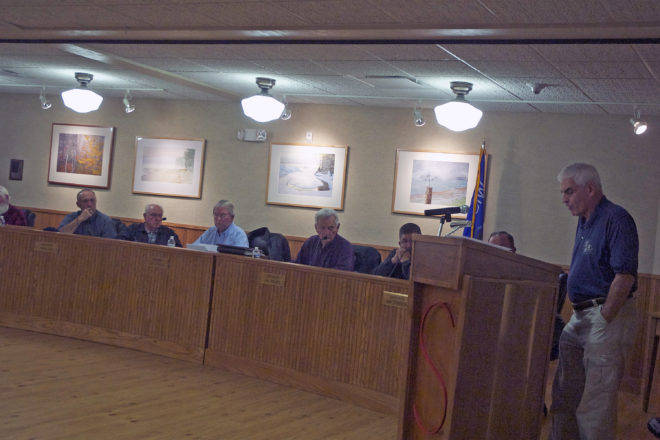 Mike Weisse, president of the Clark Lake Advancement Association, talks about water level issues before a Nov. 10 joint meeting of the Jacksonport and Sevastopol town boards. Photo by Jim Lundstrom.

A special meeting of the town boards of Jacksonport and Sevastopol was held Nov. 10 at the Sevastopol Town Hall to set the record straight on management of Clark Lake.

Sevastopol board Chair Leo Zipperer said there are so many rumors flying about the lake. “Unfortunately,” he added, “the Town of Sevastopol is the recipient of all the bad rumors.”

He said the rumors are that the Sevastopol Town Board shirks its duties in dam operations and water levels on Clark Lake.

“We are listening tonight as one body so we all are getting the same story,” Zipperer said.

The boards then opened the meeting up to the Clark Lake residents who showed up. They included Mike Weisse, president of the Clark Lake Advancement Association, who advocated for Jacksonport having a decision-making role in Clark Lake management.

Chuck Birringer, vice president of the Clark Lake Advancement Association, announced he was appearing not for the organization but as a Clark Lake resident. He spoke for the concept of representatives from the two town boards dealing with residents’ concerns about Clark Lake rather than the association, who he said should serve only in a fiscal role to help support activities on Clark Lake.

Several residents then spoke about how they have lost trees to ice shoves and land to high water.

Sevastopol Supervisor Dan Woelfel said he hears all the complaints and comments about the town’s management of the lake, which he said includes “a ton of screaming and some really nasty communications.”

Ultimately, he said, the dam is undersized by 50 percent.

“In times of high water, it’s near impossible to control the flow,” he said. “You react, you try to anticipate, but it isn’t a science.”

Woelfel said people have charged that the town only checks the dam four times a year. “We’re there almost every day,” he said. “We are doing everything we possibly can to make this a livable situation for everybody living on the lake. Some things are out of our control.”

“Anybody that lives on the water has to realize that nature takes its course,” said Sevastopol Supervisor Chuck Tice. “If the water is high, you may lose stuff. Somewhere along the line something’s going to happen.”

Several people suggested that a member of the Jacksonport Town Board sit on Sevastopol’s Parks and Dam Committee. Zipperer said Sevastopol just doesn’t appoint a member of another town board to one of its standing committees.

Jacksonport Town Board Chair Randy Halstead asked if this isn’t a special circumstance.

Zipperer said perhaps an advisory committee could be formed, but they won’t allow another town’s board member on their committee. Zipperer also suggested that Jacksonport could pull out of the memo of understanding between the two towns if they so choose. Halstead said the Jacksonport Town Board would go over the memo and make a decision on how to proceed.

The entire meeting can be watched at youtube.com/watch?v=9lD_Xz7wyLk.