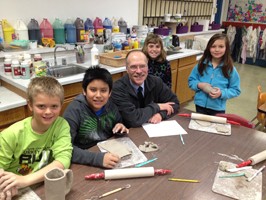 Sevastopol Elementary Principal Joe Majeski is retiring after working at the school for 24 years.

After 24 years, Elementary Principal and Special Education Director Joe Majeski has decided it’s time to retire from his position at Sevastopol Schools. While his last day on the job is in June, Majeski’s already begun packing up his office and filing away mementos, such as his numerous achievement awards and a student’s dog-eaten homework, which he framed and saved.

Reporter Matt Ledger sat down with Majeski to see what he will do in retirement and pick his brain about the current state of public education.

What made you decide it was time to retire?

When you work at a small school as the principal, you’re pretty much it. Principals in small schools tend to work anywhere from 50 to 70 hours a week. If you want to be good, it’s closer to 70. It really is an all-encompassing time.

Fortunately, my kids were here so I still got to be with them and see them. And that’s what I’ve always wanted; I’ve wanted to be principal of the school my kids went through. But now they’re off in their own careers and living somewhere else, and I need time to spend with them.

And I’m an old guy, so it’s time to open up things for younger folks coming through.

So what are you doing after you retire?

I’m going to take three, four months and just decompress. Because you do put a lot of time and effort into this, and you don’t have much time to think about yourself. So I’m going to take some time and find out where my new passions are. It may still be in education. I may go into education again part-time.

My wife, she’s a librarian up in Baileys Harbor, and she started a business two years ago, Door Peninsula Hops. We have a lot of interest in it, and I need to help her with that business a little bit.

And then I want to spend some time with my kids out west. But I tend to think at some point down the line I’ll stay in education.

What’s changed in education in the last 24 years?

I would say a couple of things. Number one, schools are political hot potatoes right now. Our elected representatives, at both the state level and federal level, have increasingly taken over public schools with their mandates.

Part of the rationalization for that is public school test scores are starting to drop in comparison to other countries. Now I guess how I answer that is if our politicians really want us to compete on an international level academically, we need to become like those schools.

Those schools have year-round school. Every year our kids return to school and they’ve lost 25 percent of what they’ve learned from the year before. So we spend the first nine weeks reviewing everything. That’s time we’ve lost.

And the second thing, if we want to compete and we want to become like those schools, those schools have no extracurricular activities. They focus solely on the academic achievement of their students.

So if you want us to really focus on those educational achievement test scores, we have to become like those international schools. Now will our society allow us to do that? I’m not so sure they will.

Do you think that’d be a good idea?

I’m not sure. I think there has to be a balance between extracurriculars and academics. But if our politicians, who have pretty much taken over our schools now, determine the quality of our schools is determined by academic achievement, that’s what we have to focus on.

What do you think some of your successes have been?

I think the respect and support we’ve been able to earn from our community is a tremendous success for all of our staff and our students and our parents. They should be really proud of that.

Even though we’re a small school with a high poverty rate – we have about 40 percent of our students that are at the poverty level, and you wouldn’t think that in Door County – even given that high poverty rate we’ve been able to achieve an amazingly high achievement level with our students.

Our community isn’t made up of college professors. We aren’t a wealthy community with college-educated parents here. But what we do have is very hard-working parents who really expect a lot of their kids, and they really support our school system.

And we have just an amazing staff. I would hope they’d be good, because I’ve hired most of them over the years and if they’re not good it’s my fault.

What’s your favorite memory of your time here?

God, I have so many memories. Probably the fun things that we’ve done to motivate kids.

I remember I had to take the Polar Bear Plunge in Jacksonport. I said if you read a million minutes or whatever it was, I will do the Polar Bear Plunge. And I did it and they took some pictures and stuff. I’ve done that twice, and I will never do that again. It took me about two months to recover.

If you wanted to leave residents with any last thoughts on your time as principal, what would they be?

I’d like to leave just thanking the community for the tremendous support we’ve had over the years and having them realize just how good the staff actually is here. They are just some amazing folks, but they’ve also produced amazing results. Those are the two thoughts that I’m leaving with.