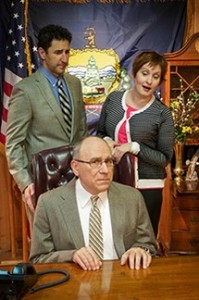 The political system in this country is broken, if we are to believe popular opinion. Paul Slade Smith’s play A Real Lulu, now premiering at the Peninsula Players Theatre, takes on that notion with hilarious results. Just as last year’s premiere of The Tin Woman proved a highlight of the season, this production promises to enjoy the same success.

Set in the governor’s office in Vermont, the play begins the day after the state’s chief executive resigned in disgrace as his affair with a runner-up in a beauty queen pageant became public. The lieutenant governor Ned Newley suddenly finds himself in charge, a position that he not only does not want, but terrifies him; his deer-in-the-headlights swearing in ceremony becomes an internet sensation.

Newley is anything but a glad-handing baby-kissing politician. He is a reticent bean counter who is oblivious to focus groups and popularity polls. He is dismissively uncharismatic, but has an exceptional understanding of the function of government, the intricacies of budgets, and the imperative of the common good.

Unfortunately, after the fiasco of his swearing in, politicos are confident that he will be recalled and replaced within the next few weeks. Newley’s idealistic chief of staff (and comedic straight man) Dave Riley recognizes the intrinsic strength of his boss as a governor, but is at a loss as to how to help him realize this potential because of the man’s lack of political skills. And at this point Riley is not only chief of staff, but the entire staff.

He hires a professional pollster Paige and temp worker Louise Peaks who hopelessly tries to solve the mysteries of a telephone system. CNN political pundit and advisor Arthur Vance volunteers his expertise to help the new governor not only survive but thrive.

The cynical political strategy that Vance advocates is to capitalize on Newley’s apparent bumbling lack of preparation while concealing his actual governing expertise, confident that voters want to elect a leader who is an average guy, an outsider who believes government needs fixing with common sense as a remedy – someone who seems real, rather than a polished politician.

As a part of the campaign to reinvent the new governor, television reporter Amy Summerfield is brought in to pitch softballs in a contrived interview (her boss in cahoots with Vance).

And the temp worker Louise Peaks is the real Lulu of the story, her spectacular ineptness in her job not only sending the theater audience into gales of laughter, but in the eyes of the strategists, making her an ideal candidate for lieutenant governor.

The performance is built upon the standards of farce and situation comedy: colorful characters, zany scenarios, and amusing one-liners. Production standards are high and the acting is uniformly strong.

Erin Noel Grennan (last season’s Tin Woman) creates a delightfully clueless Louise Peaks, a highlight of the show. Greg Vinkler’s Ned Newley with his sociopathic shyness seems a bit heavy handed at times, but he emerges as a value center in the production. And Sean Fortunato’s portrayal of nice guy Dave Riley is a welcome foil to the show’s cynical satire.

A part of the production’s success is found in its ability to strike responsive chords in the audience as it recognizes political foibles that are all too familiar, the weaknesses that are inherent in a democracy demanding an informed and committed electorate. But at the same time, we know in our hearts, as Ned Newley says, “When government works, government can sometimes do good,” as in his example, following the collective will of the people to build necessary highways.

However, A Real Lulu is anything but didactic. Rather, it is a fun-house mirror held up to reflect our system of government, including our role in it. Some of us tend to rant as we express our frustrations with our political structure, when maybe laughter is the best medicine. And the opening night audience enjoyed rounds of healthy laughs from the opening lines to the final speeches, and then collectively rose to their feet as they applauded the curtain call.