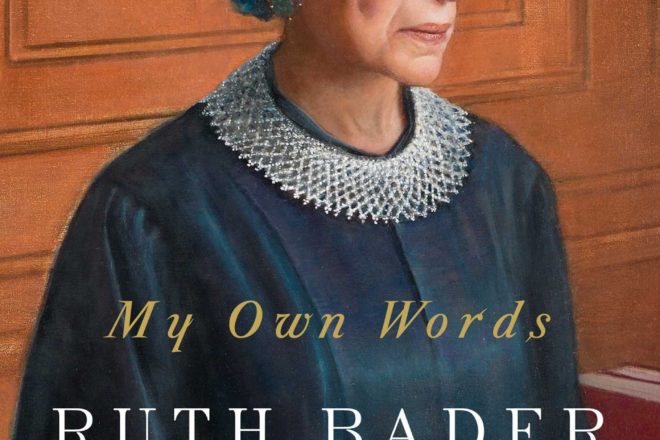 The amazing Ruth Bader Ginsburg has inspired a variety of Halloween costumes, T-shirts, and action figures; two coloring books; a song cycle; a play; a movie; and an opera. The praying mantis Ilomantis ginsburgae is named in her honor. She has been called a cultural rockstar, a pop cultural icon, and the Notorious RBG (after the rapper Notorious B. I. G.). She is also called a Justice of the Supreme Court. When she recently fell and broke several ribs, the nation held its breath; she is, after all, 85 years old.

In 2016 Justice Ginsburg published My Own Words, a collection of her writings and speeches from elementary school until the Supreme Court’s 2015-16 term. My Own Words is still available in stores, and it should provide good reading for people who have some knowledge of the law and who are curious about the workings of the Supreme Court. Any college that has a mock-trial program will want this volume on their bookshelves, as will Justice Ginsburg’s many devoted fans.

Aside from her rockstar status, Justice Ginsburg is well-known for her work in women’s rights. However, readers of My Own Words may be surprised to learn that her first case in gender equality was on behalf of a man, one Mr. Charles E. Moritz, who had sought a $600 tax deduction to assist in the care of his elderly mother. He was denied this deduction because he was a single man. As Moritz wrote, “If I were a dutiful daughter instead of a dutiful son, I would have received the deduction. This makes no sense.”

Ginsburg and her husband Marty agreed and eagerly took the case.  They received assistance from the American Civil Liberties Union (ACLU). Moritz eventually received his deduction, and Ginsburg’s interest in gender issues caught fire. She became one of the founders of the ACLU’s Women’s Rights Project. But she enjoyed telling the story about a memo she received from a secretary who typed her articles and speeches:  “I have been typing this word, sex, sex, sex, over and over. Let me tell you, the audience you are addressing, the men you are addressing … the first association of that word is not what you are talking about. … Use the word gender. It will ward off distracting associations.”

In My Own Words, Justice Ginsburg touches upon many topics:  there are tributes to friends and colleagues, sketches of famous women (from Anne Frank to Gloria Steinem), an account of the day-to-day work of the Supreme Court, and “remarks” on some landmark Supreme Court cases — including Loving v. Virginia, which Ginsburg describes as “one of the most important cases the U.S. Supreme Court has ever decided.” The principals were Mildred Jeter and Richard Loving, who wanted to get married and raise a family in their home state of Virginia. But Loving was white and Jeter was of mixed black and Native American descent, and interracial marriages were illegal in Virginia. Hoping to find a way around the law, Mildred and Richard got married in Washington, D.C., but five weeks after they returned home to Virginia, the sheriff and two deputies burst into their bedroom in the middle of the night, carried them off to jail, and forced them to leave the state.

After the March on Washington, Mildred took heart and wrote to Robert Kennedy, who suggested that the couple contact the ACLU. In 1967 the Supreme Court unanimously ruled in the Loving’s favor. As the Chief Justice wrote, “There can be no doubt that restricting the freedom to marry solely because of racial classifications violates the central meaning of the Equal Protection Clause.” Mildred lived to see the last of the state miscegenation laws abolished (Alabama in 2000).

One of the reasons for Justice Ginsburg’s personal appeal is her unabashed love for her husband and “life partner,” the late Martin “Marty” Ginsburg, a lawyer and gourmet chef. (A supportive spouse, Marty claimed that he once prepared an emergency luncheon by throwing together “a very well-known uncomplicated Tuscan dish” made from cannellini beans, lemon juice, parsley, scallions, and several cans of tuna fish.)

Justice Ginsburg is also famous for her staunch friendship with Justice Antonin Scalia, who was as conservative as she is liberal. The comic opera Scalia/Ginsburg is a portrayal of their friendship and also a parody of practically every opera ever written. Near the end of Scalia/Ginsburg, a creature called “The Commentator” (with a nod to the Commendatore in Don Giovanni) sentences Scalia to “banishment” because of his conservative interpretations of the Constitution. But Ginsburg announces that she must go to banishment with Scalia. When the astonished Commentator asks, “But why would you do this for your enemy?” Ginsburg replies, “I would not. But I would do this for my friend.” The opera concludes with a duet by Scalia and Ginsburg:  “We are different. We are one.” — a tribute to the friendship that transcends politics. Perhaps a revival of this opera is in order.