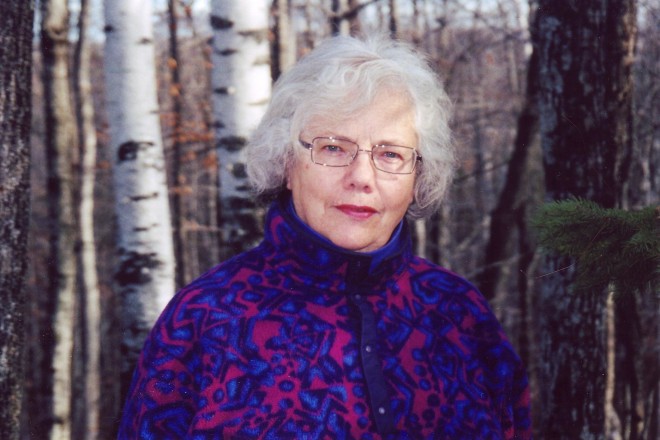 She is reading her poetry on the second Wednesday of the month at Ephraim’s Unitarian Universalist Fellowship. White haired, intense, with a clear voice honed by decades of teaching college English students, Estella Lauter is not only performing for the assembled Door County poets, but is also teaching – just in a different way than she did in the classroom.

Her example is helping beginning and master poets understand just what a poet is and how a poet goes about their business deepening all of our understanding of the world.

Lauter, the former Door County Poet Laureate, is an extraordinary poet. Her new book of poetry, You Never Said. We Didn’t Ask: A Legacy from World War I (Finishing Line Press) proves just how extraordinary a poet she really is. 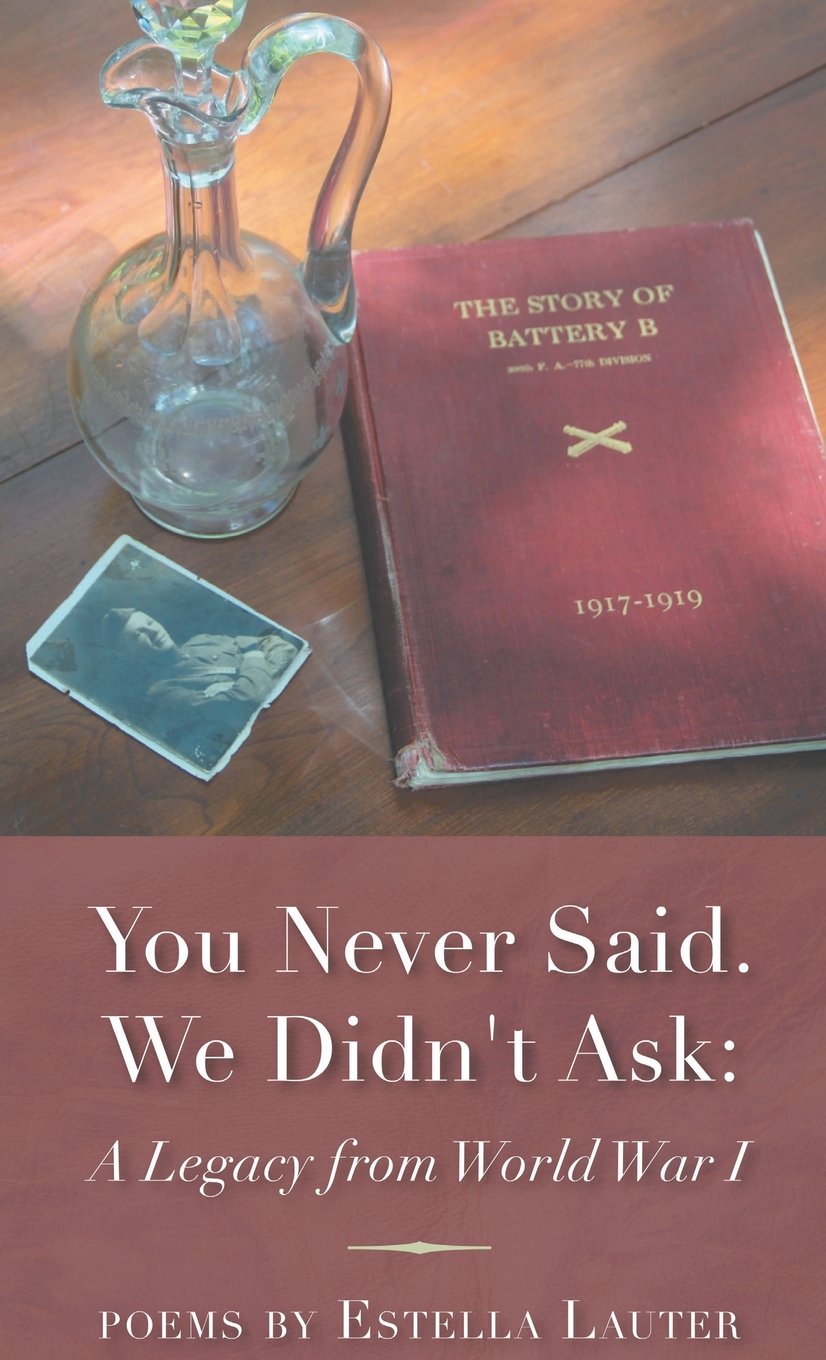 The poems tell the story of Charles F. Lauter (1890 – 1980) who served in the 306th Field Artillery U.S. Army American Expeditionary Force during World War I. Estella Lauter’s father-in-law, Charles, rose from the rank of private to second lieutenant during the war. He saw action at a number of places from Sept. 26 through Nov. 11, 1918 in the war to end all wars. He fought in some of the bloodiest battles of World War I for American soldiers.

Behind the poetry is a thin red book that came into Chuck and Estella Lauter’s possession after the elder Lauter’s death in 1980. Titled The Story of Battery B, 306th F.A. — 77th Division, the book was written by seven soldiers while the Battery was waiting from November to April to go home.

Her skills as a scholar come to the fore as she explores complex issues that rise from the little red book and her father-in-law’s life. The poetry tells a narrative written in clear, concise, if compacted, language. Currents within the story, however, lead to contemplations about how this one man and his war experiences reflect upon American history and how that history is affecting the world we live in today.

Lauter was born with another name, Charles Lauterwasser. German, he later, as the first poem in the book tells us, not only insisted he was born American, but “scratched the wasser off family medals/and tombstones, burned his papers of origin.” He became Charles Lauter, not Charles Lauterwasser, passing his changed surname down to Chuck and Estella Lauter.

This was not unusual even in Wisconsin with its rich German history, but Estella asks the question:

Did you think your father’s homeland

could never be redeemed

and the new world would never

It is this deep questioning that makes this poetry so important. We have the story of a man and his army brothers who did not consider themselves heroes. They made that plain in the thin red book time and again. But we also have this American experience of immigrants who came to this country and felt so deeply about their identity as Americans that they would even go to family graves and change names carved in stone.

Later in his life Lauter also refused to have anything to do with guns in any context. He did not go hunting with friends or participate in target shooting with his friends at the VFW. Like a lot of veterans from both World War I and World War II he refused to talk about his war experiences. As the title of the book says, “You never said. We didn’t ask.” He exorcised the nightmare of friends dying, the death smell of battlefields, and the trauma of participating in nightmarish battles from his everyday life.

What the story told through the poetry makes plain, though, is that Lauter changed the trajectory of his life to go to war. He had owned, with his brother, an electricians shop in New York’s Washington Square just as the boom of the nation’s electrification was in its infancy. He had met the short story master O. Henry and the Russian novelist Leo Tolstoy through his business. He was an up and coming man.

Then, after the war, after he no longer had a business that could tap into the great electrification boom, he avoided the experience in his life that had made him different from whom he had been. As the poet Lauter puts it:

You never spoke about the war

although it changed your life.

We didn’t ask about the war

although it made ours possible.

As happens again and again in the book, Estella Lauter is exploring what seems to be a myriad of questions universal to the American experience in this stanza. She’s addressing her father-in-law in one sense, asking him, after he is long past the ability to answer, why he didn’t talk to his relatives about his war experiences. But she’s also asking herself and Lauter’s relatives why they didn’t ask questions that would help them understand how his experiences shaped not only his life, but their lives as well.

The universality in this particular stanza comes out of the fact that too many of us fail to talk to our mothers, fathers, aunts, uncles, elderly friends about the important experiences of their lives. Then their lives are gone into the arrow of time. They can no longer help us understand who we are as individuals. The part of our history flowing out of their history disappears into the past.

And Estella Lauter is asking herself, her husband, their relatives, and all of us, why are we so incurious? So willing to let those older than we are, who have meant so much to our lives, not tell us the stories important to who we have become? Stories of these lives are important to our lives.

If her skills as a scholar help her dig out themes and lessons from the thin red book of Charles Lauter and his army brothers, her skill as a teacher keeps pushing us to learn the lessons presented through a man’s life. The lessons are not always stated directly in the poetry. Good teachers don’t teach that way. They present narratives and then challenge us to find the lessons important to us inherent in the stories. They help us to gain knowledge by inspiring understanding within ourselves.

In the last poem in You Never Said. We Didn’t Ask, Lauter achieves what all good teachers achieve. She leads us to where we, as Americans, are in our national life today and challenges us to understand the consequences of decisions we are making.

She brings all the book’s themes (many of which are not fully explored here) into a summing up that should make us think about ourselves as individuals, the nation and humanity’s future.

It’s up to the careful reader to discover exactly what “the brink” is in the context of a powerful book of narrative poetry.