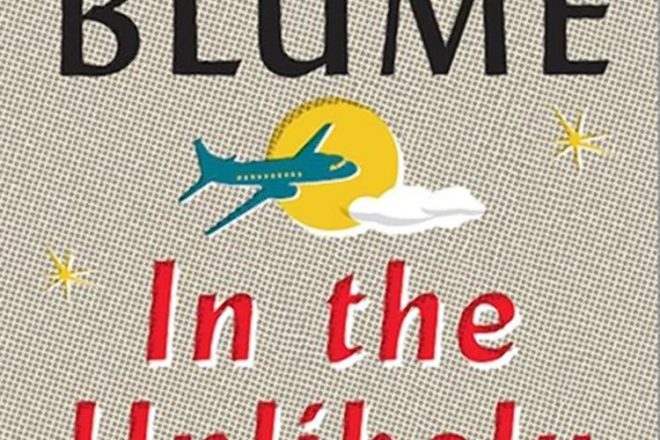 Judy Blume gained fame with her iconic novel for young people, Are You There God? It’s Me, Margaret (1970), and proved her versatility as an author with the novel for adults, Wifey (1978). Her latest novel In the Unlikely Event is her 29th book.

Blume, who grew up in Elizabeth, New Jersey, was in the eighth grade during the winter of 1951-52 when, within a period of 58 days, three airplanes crashed within the city, a total of 116 people losing their lives, including passengers on the planes and victims of the falling airplanes on the ground.

The book takes its title from the phrase that has become a standard part of flight attendants’ instructions to passengers preparing for takeoff, chosen because of the inherent irony of an unlikely event occurring three times.

While the characters and experiences connected with the disasters are fictional, the three airplane crashes are real, the author explains in an afterward to her novel. “I have firsthand memories of that time and plane,” she wrote.

The story begins in 1987 with the central narrator Miri Ammerman at age 50 flying to a memorial in Elizabeth for those who perished in the “plane crash city” disasters. After this brief introduction, the plotline flashes back to revisit the events that occurred when Miri was 15, and then, for the resolution, returns to the commemoration 35 years later.

Blume has meticulously recreated the culture of the early 1950s, a trip down memory lane for those of us who are old enough to recall those days. But rather than focusing on sensational details of the aviation tragedies, her primary objective was to imagine the impact of the horrific events on the lives of survivors, on those connected through relationships with people who perished, on witnesses to the crashes, and on those living around the disaster sites.

While young Miri serves as the central character, a wide circle of those connected to her as relatives, neighbors, classmates, a boyfriend and other friends, are named in passages that tell their parts in the story. One positive result of this “six degrees of separation” technique is the comprehensive overview given to the reader, and subsequently an understanding of the far-reaching effect that the tragedies have had on peoples’ lives, sometimes in unexpected ways, while they attempt to move forward, trying to forge new relationships and exorcize demons. For additional perspectives, chapters begin with short “news” accounts from local papers.

But unfortunately the multiple points of view tend to dilute the reader’s empathetic response to those affected by the events. Miri as an individual sometimes seems lost in the crowd of other characters, and consequently, the novel’s storyline occasionally becomes less compelling than might be expected.

Nonetheless, many readers will enjoy In the Unlikely Event, as much for the time travel as for the narration. Blume, a 2004 recipient of the National Book Foundation Medal for Distinguished Contribution to American Letters, can tell a story.