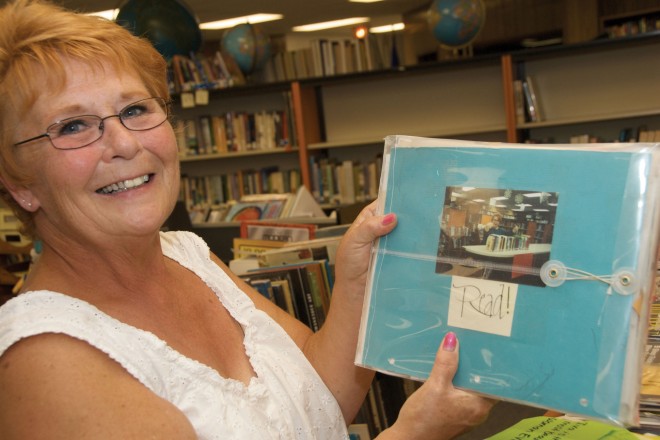 On the social networking website Facebook, 196 graduates of the Gibraltar Public Schools have formed a fan club for a hero they all share, a person the website calls “the coolest person in the world.” In a forum where other Wisconsinites are creating fan pages for Jacob Leinenkugel or Brett Favre, these young people are taking the time to honor a more unlikely hero:  Iva Grasse, a clerk in their school library.

For 16 years, Iva Grasse has worked as an aide in the Gibraltar school library. Though her central position at Gibraltar makes it difficult for students and teachers to imagine the school without her, Gibraltar is only the most recent chapter of Iva’s full and varied life. When the library position opened for applications in 1992, Iva and her husband, Jim, had a full complement of cows and other animals on the Ellison Bay farm where Jim grew up and where the couple now live.

“I love animals as much as I love kids,” Iva says, fondly remembering her days working with the “beefers” on their family farm. But in 1992, she recalls, they were in the process of selling their cows, and when a position opened up as an aide in the school library, she made an almost seamless transition from caring for cows to caring for kids.

At the library, Iva regulates book circulation, teaches lessons about a variety of topics (including finding books and information in the library), and facilitates remote classes via a system called ITV. For several years in the 1990s, she served as a coach for the children’s creativity program Odyssey of the Mind. And until a couple of years ago, Iva regularly sold tickets to Gibraltar’s basketball games.

Of all these diverse contributions, Iva’s most extraordinary quality is her ability to forge a powerful, lasting connection with almost every student who crosses her path. A graduate of a large high school in Albuquerque, Iva appreciates the intimacy of Gibraltar schools.

“I graduated from a class of 851,” she remembers. “How many kids do you know in a class like that? I can only remember one teacher that I bonded with, but here the kids all have good memories of the teachers and of the principal.” Though she enjoys all aspects of her job, it is this opportunity for individual bonding that Iva appreciates the most. “I love books,” she says. “And it’s a good working environment, and everyone’s nice. But mostly, I like the kids.”

And the kids like Iva. Former student Meredith Coulson says, “Iva is single-handedly the most supportive, confidence-boosting, number-one fan of every kid at Gibraltar.”

Gibraltar grad Matt Shumway agrees, citing Iva’s attitude of broad acceptance as a main reason for her favored status at Gibraltar. “Iva is the type of person who brightens up students’ days. She’s the one the ‘bad’ kids count as their friend, but is loved by everyone. She’s not judgmental—she’s equally welcoming to jocks, hippies, bookworms, goths, rednecks.”

Indeed, Iva’s universal love for and investment in her students was evident even over summer vacation when I went to talk with Iva at her farm in Ellison Bay. She talks about students from throughout her 16 years of work at Gibraltar like they’re old friends, rattling off anecdotes about them as easily as she recalls their names. Certain stories make her teary, a quality for which she is famous among Gibraltar students. 2002 graduate Emilie Coulson remembers, “Iva cried over everything, whether it was happy or sad, big or small, but she mostly cried out of joy at seeing students. And that is how she made everyone’s day, almost every day.”

Iva agrees, “Graduation’s really hard for me, because they’re like my own kids and I just know I’m going to miss them. And of course I’m just the biggest wuss, because I cry.” But even after students graduate and stop seeing Iva on a daily basis, many make a special effort to stay in touch with her, stopping by her desk in the Gibraltar library and keeping her up to date on the latest in their lives. This summer, she attended two weddings of former students.

Perhaps because even the public arena of school is so personal to her, Iva makes specific efforts to integrate her own experiences into the academic realm. Almost 10 years ago, Iva successfully battled breast cancer, and now she collects pink yogurt container lids each fall as a cancer treatment fundraiser. Iva’s passion for the cause is infectious; the Iva Grasse Fan Club website now features a call of its own for the pink yogurt tops, and even students who have already graduated regularly send them in to Iva.

The year after her bout with breast cancer, the class of 2000 invited Iva to speak at their commencement. “I’m a very, very shy person, and I immediately said no.” Her students, however, would not accept her refusal, so Iva began preparing her speech.

“I practiced every night for months, and I prayed a lot,” she remembers. When she got up to speak, “I almost walked off the stage, but my family and friends were there, and the kids were there and I knew I couldn’t let them down. And after the speech I got a big group hug. It was amazing.”

In her speech, Iva urged her beloved students to behave decisively and passionately: “Whatever you do, do it. Just do it. Everything’s an experience, no matter what it is, if you learn from it.”

Though Iva regularly bestows this and other wisdom on her beloved students, her advice comes in the form of respectful, compassionate chats rather than authoritative lectures. When students come to her with problems, Iva says, “Many times I’ll say, ‘Been there, done that.’” Though she’s too modest to admit how deeply her students respect her, Iva believes this attitude is one of the reasons they bond so closely to her. “It’s how I handle things,” she explains. “I don’t accuse them right away. I talk to them.”

She plans to keep talking to them for a while. She’d like to buy some more cows sometime soon, but brushes off the idea of retirement with a smile. “I don’t know if I’ll ever retire,” she muses. “I have the perfect life. Everything’s happy for me.”