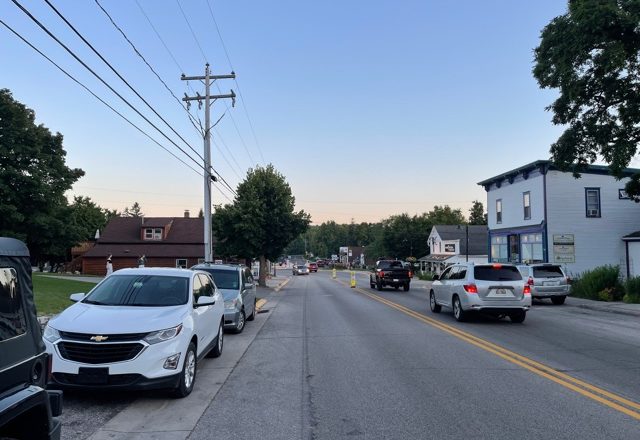 A portion of the increase in room tax will help municipalities like Egg Harbor pay for coming improvements to sidewalks, parking, and other infrastructure needed to keep pace with demand. Photo by Myles Dannhausen Jr.

The documents were distributed July 28, and five municipalities had already signed them as of the deadline of this issue of the Pulse.

The room tax is charged to visitors staying in hotels, bed-and-breakfasts, motels and short-term-rental (STR) properties.The movement to increase it from 5.5% to 8% began in 2020 in the Town of Baileys Harbor with its then-chair, David Eliot. The impetus behind the increase was generating more revenue for municipalities to maintain infrastructure such as parks, streets, fire stations and emergency-services equipment. Thirty percent of room-tax revenues generated within a municipality return to that municipality to spend however it chooses.

It took two-thirds – 13 of the county’s 19 municipalities – to compel the room-tax increase and the DCTZC action to send the new documents. The 13 municipalities that agreed in advance to sign the ordinance and intergovernmental agreement are the towns of Baileys Harbor, Egg Harbor, Gardner, Gibraltar, Liberty Grove, Nasewaupee, Sevastopol, Sturgeon Bay and Washington; the City of Sturgeon Bay; and the villages of Egg Harbor, Forestville and Sister Bay.

To date, the towns of Baileys Harbor, Gibraltar, Liberty Grove and Sturgeon Bay have signed the documents.

The rate change would take effect Jan. 1, 2022. Reservations and deposits made this year for next year would still be taxed at 5.5%, said Josh VanLieshout, DCTZC chair.

“New reservations would be at the 8% [rate] when there’s been a sale starting Jan. 1,” he said.

The new ordinance also strengthens the DCTZC’s ability to enforce and collect the lodging tax from short-term rentals.

“The STR business and online lodging marketplaces – Airbnb, Vrbo [through which STRs rent their units] – are really two different things,” VanLieshout said. “The STRs are the people who own or operate the homes or condos. The commission’s approach is, we want to make sure that those people who actually own the real estate that’s being rented know that they’re responsible for the lodging tax.”

The county’s tourism officials are hoping all the municipalities will embrace the change and remain with the DCTZC, which currently comprises all of Door County’s municipalities.

“From our standpoint, we want to do everything in our power to keep all 19 municipalities in the zone,” said Jon Jarosh, interim CEO for Destination Door County (DDC). “That continues that collective approach in managing Door County as a single destination.”

DCTZC and DDC officials intend to circle back with all municipalities to answer questions, including those that remain uncommitted or said no during the first round.

One of those was the Town of Jacksonport, and now Randy Halstead, town board chair, said he was unsure what the town would do.

“We’ll wait and see if they have the numbers and then discuss it,” Halstead said.

Halstead said the town had not wanted to raise rates for visitors on the heels of a pandemic that stressed the lodging industry.

“We felt it was a bad time to be doing it with everything going on with the pandemic,” Halstead said. “I’m sure some people had financial issues. We didn’t want to make it hard for them.”

When the DCTZC formed in 2007, not all of Door County’s municipalities joined right away, but by 2010, all were on board, including the City of Sturgeon Bay, the final holdout.

This time around, VanLieshout said the DCTZC hasn’t addressed how it would handle latecomers.

“I can’t imagine that the commission would say, ‘No, we’re never going to let you in,’” he said. “I imagine for communities that maybe it takes a while, or that choose not to at first or want to come in a year from now, I imagine the powers that be would say, ‘Yeah, come on in.’”

If a community does leave the commission, DDC would likely cease supporting the tourism initiatives and infrastructure within those communities.

“It would make our job as the destination marketing and management [organization] a lot harder if all of the sudden there wouldn’t be 19 municipalities in the zone – if this part of Door County isn’t really part of it,” Jarosh said. “Because visitors don’t care.”