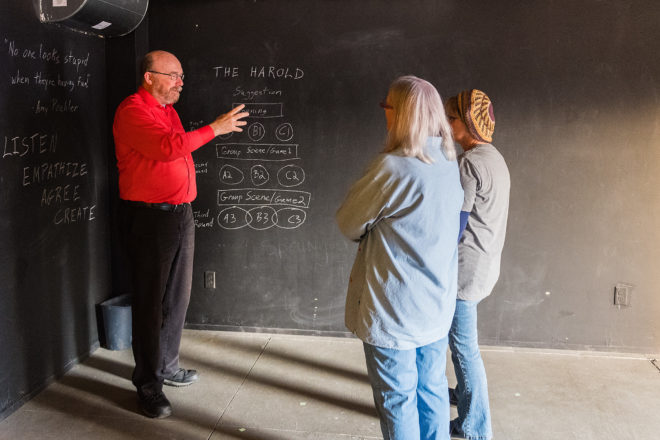 Ross Dippel has two degrees in theater and earned his master’s as a member of the first graduating class from the Shakespeare Theatre Company’s Academy for Classical Acting in Washington, D.C. He’s appeared in major roles at the Kennedy Center and other theaters from coast to coast. He’s been in films and on television, He’s founded two theaters and taught countless theater classes.

But Dippel was terrified of improvisation – theater without the “safety net” of a script. Determined to face his fear, he enrolled in a two-week improv workshop at Second City in Chicago, the first ongoing improvisational theater troupe, established in 1959. And Dippel fell in love. “Improvisational theater reminds me of the childhood games that brought us so much joy,” he said. “What we do in improv is seek connections between people, trying to find areas where we agree and can relate. It’s a really valuable tool for doing that. Improv exercises parts of the brain that start to deteriorate with age. And it’s fun.”

Working with improv classes for middle school and high school students at the Birder Studio of Performing Arts in De Pere and seeing how much the young people love improv, it occurred to Dippel that older adults would also enjoy this experience.

And Door County, where Dippel lives, has a ready-made supply of older adults, many of them already interested in and/or involved with our many professional and community theater groups.

With this in mind, Dippel placed an article in local newspapers inviting people age 50 and older to an introductory meeting of Death’s Door Knockers at the Inside/Outside Space at the Margaret Lockwood Gallery on April 19.

Four people – two women and two men – showed up for the meeting, and several others called Dippel to express an interest in the group, although they were not available that evening. All of the four had some theater experience, but Dippel emphasized it isn’t a requirement.

He suggested that participants buy Truth in Comedy: The Manual of Improvisation by Charna Halpern and Del Close, who trained John Belushi, Bill Murray, John Candy, Gilda Radner and many, many others. (Other World Books in Sturgeon Bay hopes to have the books available.) It focuses on the improvisational process and particularly on The Harold, a long-form type of improvisation that begins with a theme, suggested by the audience, that is “deconstructed, reconnected and recreated through the course of different games and scenes with the ultimate intention of bringing the theme back together again in a new and exciting way.” 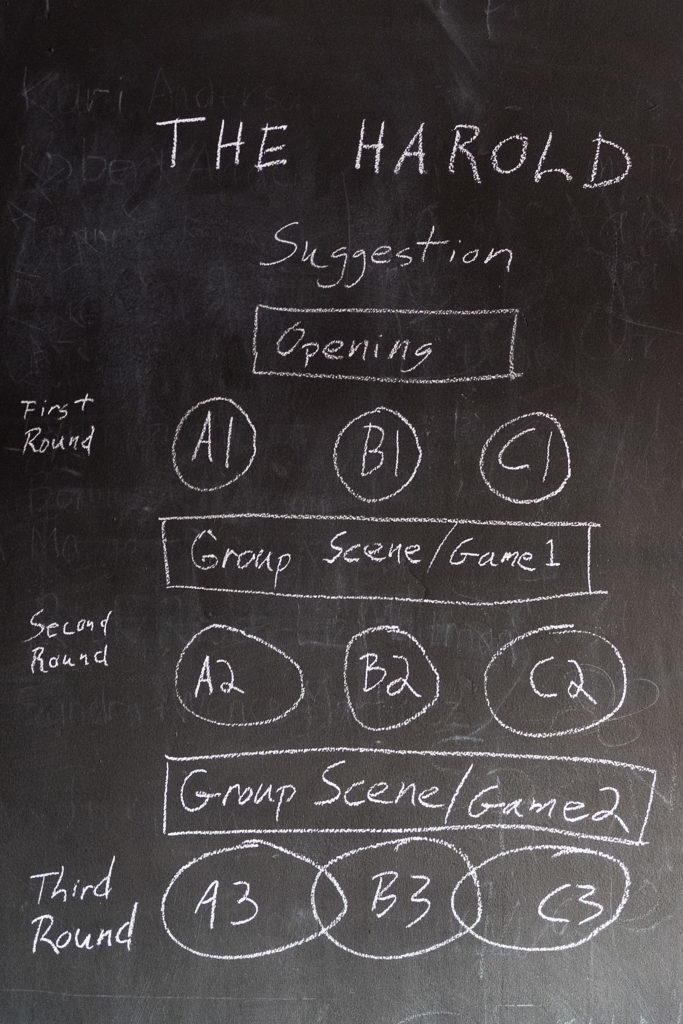 While the initial meeting had been advertised as being from 7 to 9 pm, Dippel finished his explanation and answers to questions a bit before 9. No one wanted to go home. He had said there would be no demonstrations of improv on the first night, but when requested, he happily obliged. Then others wanted to try it and quickly proved to be adept at suggesting themes and quick-witted in their responses. Because there are no rules, it was, as Dippel said, fun.

Dippel will return to Second City for more improv training this summer. He hopes to see Death’s Door Knockers grow into a company that can stage performances as a group or as smaller teams. And he has talked with the director of the Door County Senior Resource Center about the possibility of offering classes there.

“Improv isn’t just for entertainment,” Dippel says. “In today’s climate, the skills involved with improv – seeking connection and areas of agreement, accepting what others say without criticism, learning to trust one another and searching for common goals – are something that is desperately needed.”

The next meetings of Death’s Door Knockers are May 17 and 31, 7-9 pm at the Indoor/Outdoor Space at the Margaret Lockwood Gallery, 7 S. Second Ave., Sturgeon Bay. (Use the door near the sidewalk on the lower level at the back of the building.) Dates are subject to change; follow Death’s Door Knockers on Facebook to stay up to date with the schedule. For more information, contact Dippel at 920.737.2850 or email [email protected].