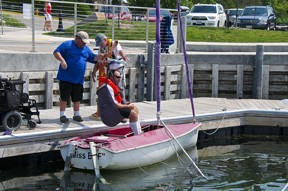 A lift system installed at the Egg Harbor marina helps get quadriplegic Eric Murrock in and out of a Sail Any Way sailboat. Photo by Len Villano. 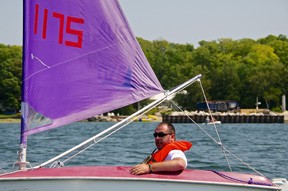 Eric Murrock was more confident than many first-time sailors when he pulled in to the dock on a sunny August afternoon.

He summed up his sailing style with his first question that crackled over the radio to the instructor: “Can it go faster?”

Murrock is no ordinary sailor. A diving accident in Nicolet Bay two years ago left him quadriplegic, and he now has limited mobility in his arms and legs. He wouldn’t be able to operate a conventional sailboat, but with the help of the local program Sail Any Way, he can cruise all on his own.

Sail Any Way helps people with physical disabilities get out on the water in specialized sailboats and sail by themselves. The boats have lead keels that keep them upright in tough conditions and a joystick that controls the sails and rudders.

That afternoon Murrock and Mary Cox, a Green Bay resident with muscular dystrophy, sailed out in two small, bright sailboats to tackle the water and claim it as their own. They practiced sailing around obstacles, avoiding other boaters and working with the puffs of wind.

Mike Stapleton, founder of the program, was coaching them through voice-activated walkie talkies from a powerboat. 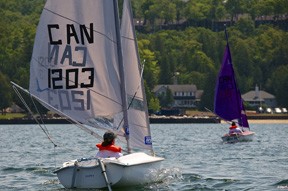 Mary Cox, who has muscular dystrophy, catches the wind in Egg Harbor. Photo by Len Villano.

“Stay downwind of the buoy,” Stapleton directed as Cox rounded a tight corner to the right of the bobbing orange buoy.

The sails on the boats displayed the Sail Any Way message – that basically, if you’ve got enough energy and the determination, you can captain a boat. One word was all it took to get the point across: “Can.”

“We had to take ‘no’ out of the dictionary,” Stapleton said.

This is the first season for Sail Any Way, and so far 15 sailors have gone out on the water for the first level of the program – Companion Sailing. In this level, sailors go for two free trips, with one volunteer in a dinghy or powerboat for each sailor on the water.

But Sail Any Way doesn’t just give boat rides – it’s a legitimate sailing school. If sailors want to use the boats more than twice, they have to put in some work.

“We’re really careful about safety and the integrity of the program,” Stapleton said.

Participants can choose to continue with the program and move on to level two, Land Drills, where they learn more about sailing with online videos, workshops and a Department of Natural Resources boaters’ safety class.

Even if she can’t do the things she learns in the boaters’ safety class, Cox still wants to understand the ins and outs of sailing.

A lift system installed at the Egg Harbor marina helps get quadriplegic Eric Murrock in and out of a Sail Any Way sailboat. Photo by Len Villano.

Cox is another new sailor, but she took to the water like she’s meant to be there. While she was on the bay Stapleton and the other volunteer could leave her mostly alone. She easily maneuvered through the bay full of other sailboats, jet skis and powerboats.

“I am getting the hang of it,” Cox said after she pulled into the dock. “Catching the wind is just awesome.”

After they’ve mastered the Land Drills level, sailors move on to level three – Sailing Solo – where the ratio of volunteers to sailors is lower, and two or three sailboats can be out for each volunteer.

Some Sail Any Way sailors will move past Sailing Solo and race. Brian Hess, another participant new to sailing this year, is one of the program’s future racers. Later this month he will participate in a conventional regatta – meaning he’ll compete against able-bodied sailors – and in September will enter the Mobility Cup 2012 regatta in Ontario, Canada.

“If it seems like we’ll have enough sailors into racing, we may put the word out and get more of these boats,” Stapleton said. For now, Sail Any Way only has three boats. The special crafts don’t come cheap – they run about $7,000 each and are shipped from Australia.

There are other versions of these mobility-minded sailboats that hold two people, Stapleton said. That means one sailor could teach another how to operate the boat while they’re sitting side-by-side. It also opens up Sail Any Way to cognitively disabled persons who may need more immediate direction. 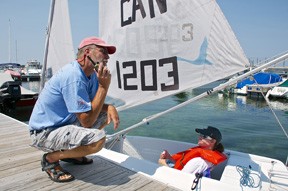 Sail Any Way founder Mike Stapleton checks to make sure his walkie talkie is functioning properly at the dock before Mary Cox of Green Bay heads out onto the water. Photo by Len Villano.

Sail Any Way is awaiting its 501(c)(3) status as a certified nonprofit, but to raise money in the meantime, Stapleton put up a Craigslist advertisement asking for donated boats. When gear is donated he picks it up, does repairs and sells the equipment. He’s already had three boats donated and sold two of them.

The Village of Egg Harbor is doing its part to help the program, too. It donated marina space for the boats and allowed Stapleton to modify docks in four places to accommodate the lift that helps disabled sailors get in and out of the boats.

“We really appreciate what Egg Harbor is doing,” Stapleton said. “This is some pretty expensive real estate.”

And Sail Any Way offers up a pretty amazing experience, as sailors head out on the bay, practicing steering, tacking and feeling the breeze on their faces.

“Eric, I would say you’re a natural,” Stapleton called across the water on Saturday. “And I’m not just saying that.”

By the end of his turn on the water, Murrock was working with the wind like he had been sailing for years. His need for speed was palpable.

The answer to his question? Yes – it can go faster, with practice.