Item #1: For years I have regularly tracked the county sales tax numbers in this column. These figures derive from that half percent sales tax Door County (and most other counties in Wisconsin) charges. Merchants, innkeepers, restaurateurs, etc. collect this tax and submit it to the state (along with the state sales tax of 5 percent) and the state redistributes the county tax portion back to the appropriate county. These distributions can be found – broken down by county – on the Wisconsin Department of Revenue’s website.

One of the things that is important to keep in mind when you look at these distributions is that the total for any month reflects exactly what was collected during that month. Each individual merchant (or innkeeper, or restaurant owner, etc.) may have differing deadlines for when the tax is due to be paid (i.e. monthly, quarterly, etc.). Thus, comparing January 2010 to January 2009, for instances, doesn’t provide any clear indication of an individual county’s economic health.

Looking at a broader picture of county sales tax collections, however, can provide at least some indication of the economic health of a county.

For some time, these figures have been grim, as a collection steadily dropped, which, in turn, means that spending has dropped. And in a very small, largely insulated economy like Door County, has far reaching implications.

We have a long way to go to be back to where we were in 2007, but after steady declines, we seem headed in the right direction. Now we will wait to see how we do in the next six months. 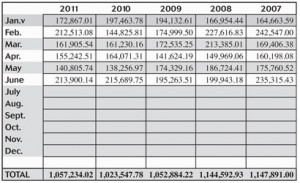 Item #2: Often times, through the years, when I have made an observation or offered an opinion of various subjects, my family and friends have commented that no one else would even care, let alone spend the time to think it through to the degree that I usually do. As I have aged, I have been forced to acknowledge the validity of their viewpoint in many, many instances. And, I want to get in front of the following comments by stating right now, that what follows in probably one of those instances.

As many of you know, I live in a small house, just inside the Village of Sister Bay limits, on Highway 57. From my home to my bookstore and downtown Sister Bay is almost exactly one mile. And every day, when I head downtown, I pass the street sign you see in the photograph below. 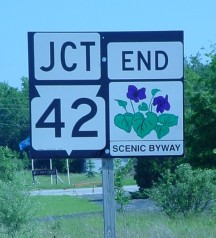 The “end” of the Scenic Byway sign that irks Steve each time he passes it.

Now please understand, I don’t want to take anything away from the significant effort that went into the Scenic Byway designation bestowed on the peninsula (for the full story on this accomplishment see the story in Door County Living magazine Volume 9, Issue 1 from earlier this year), but just as you begin the descent into downtown Sister Bay the Scenic Byway corridor ends? Really?!

Of course, I realize that the sign is suppose to convey that the Highway 57 portion of the byway comes to an end, but that isn’t really what the sign conveys. In fact, it seems to convey that the scenic beauty drivers have been enjoying up to that point is now all done with and they are back to driving along just an average road with humdrum vistas.

Come on. As you merge onto Highway 42, midway down the Sister Bay hill, you have a beautiful view of the Bay of Green Bay. And downtown is almost 2,000 uninterrupted feet of public access waterfront for visitors and locals to enjoy. The village I call home is not only scenic, it’s gorgeous, folks! And it is only going to get better as improvements continue to be implemented throughout the village.

I realized that there is nothing I can do about the sign and that I am probably the only one who is bothered by this sign. But now that I have expressed my displeasure in print you will understand why, if you happen to be driving behind me as I pass this sign on my way downtown, you might catch of glimpse of me making an obscene gesture at an inanimate object.