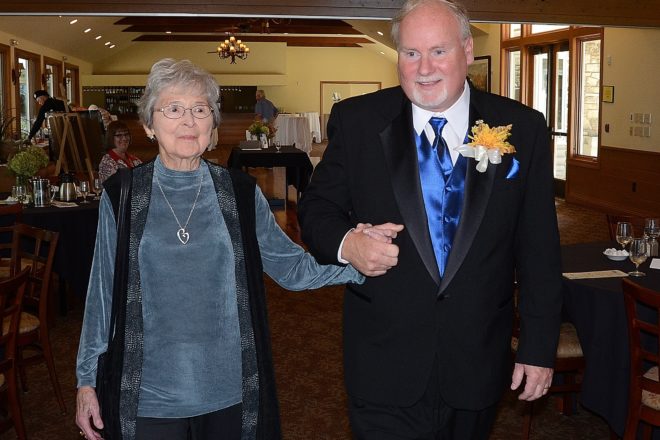 Loraine Brink, a Scandia resident, is escorted by Jerry Littler, a member of the staff who provides transportation services. His tuxedo was on loan from Concepts Bridal & Formal in Sturgeon Bay.

Many of the people who attended the 27th annual luncheon and style show sponsored by the SCAND Auxiliary at Gordon Lodge in early September knew exactly why the event was held and what the auxiliary has accomplished in the past 35 years. But for the first 25 years, luncheon/style show attendance was limited to auxiliary members and their guests. Inviting the general public only began in 2015, and this year non-auxiliary members made up a little more than half the crowd of 144.

Some of them may not have been aware of the auxiliary’s proud history.

If there was ever a Cinderella story, this is it. But there was no fairy godmother, just a bunch of very determined people (mostly women) who were not afraid of hard work. The idea for Scandia Village, a nursing home near Sister Bay, was born in 1975. It opened its doors six years later with 20 residents. There was an immediate need for volunteers to assist the residents with personal things like nail care, letter writing, crafting, reading and party coordination. More than 100 men and women became charter members of the SCAND Auxiliary. 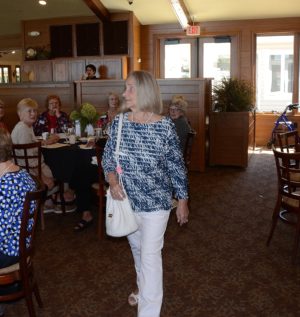 Claiming the title of oldest model was Dorothy Smith, 86, a native of England and the mother of Denise Schramm, chair of the luncheon/style show for the last two years.

Shirley Rosenquist, who had just begun a four-year term as auxiliary president, organized the first style show in 1990. It was held at a restaurant near Sister Bay that is now the Unitarian Universalist Fellowship and was attended by about 80 people. In 1991, searching for an ongoing source of income for auxiliary projects, longtime member and former president Rae Porter began selling used clothing once a month in the all-purpose room at Scandia Village. It was just one of many money-making activities, including bake sales, book sales and the sale of the popular Preachers’ Stew, donated by local churches and sold from the village hall during the Sister Bay Fall Festival for many years.

It was the dream of auxiliary members to have their own store. Shirley persuaded Regina Daubner to let them use the empty building in Ellison Bay that had been her grocery store, and that was the beginning of Bargains Unlimited.

“That first season, 1991, we were open from the end of June until just after Fall Festival,” Rosenquist reminisced recently, “and we took in $1,600! We thought we had the world by the tail because we made so much money.

“It was a great start, but then the building was sold out from under us. Kubie Luchterhand bought it for Caxton Books and Wm. Caxton Ltd. Publishing, and it’s still there. Two of our best customers that first year were Shy and Eliot Wollman, co-owners of an empty building on Canterbury Lane that had been a Scandinavian furniture store. They offered it to us free of charge for a year. A great location, but it was sold out from under us, too. It’s now the Episcopal Church. Then we moved across the street to the old medical building owned by Gordon Hull.

“Obviously, we needed our own place. In 1993, Scandia Village Retirement Center had been sold to the Evangelical Lutheran Good Samaritan Society, that had managed the facility since it opened. They owned the land where Bargains Unlimited is today. We went to them and asked if they’d loan us the money to build our own store. They gave us a 15-year mortgage, and we paid it off in just 18 months in 1995. We were flabbergasted – never dreamed we’d be so successful.” 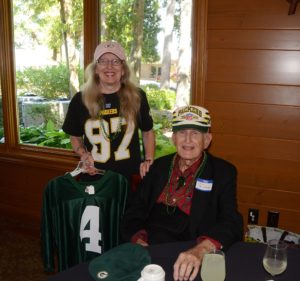 Sue Crawford and her dad were to have appeared on the runway, but a recent fall sidelined 92-year-old Jim. Instead, they modeled their love of the Packers.

The store has been enlarged twice. “The first time, Irene Newkirk, a real mover and shaker, was overseeing the creation of the Fairfield Gallery in Sturgeon Bay,” Rosenquist said. “Irene sent those workmen out to help us. They billed us monthly, and we always managed to have the money to pay them. When the addition was completed, it was debt free.”

By then the luncheon/style show Rosenquist had begun was a popular event. Volunteers, Scandia staff and some residents were eager to be selected as models. Rosenquist was the emcee, narrating the details of the garment, jewelry, shoes and bag each model had chosen from the Bargains racks. She also announced prices (often amazingly low). All the items were for sale to the audience – unless the models had already called dibs on them. Rosenquist continued to keep the event lively – except for the year she was recovering from cancer – until 2015. Now a resident of Scandia Village, she recently completed 20 years on the auxiliary board.

The past two years, the luncheon/style show has been chaired by Denise Schramm, a fireball from England who has been a full-time Sister Bay resident for three years. This year the purpose of the event was to raise money for a portable oxygen concentrator to be used by Scandia residents. It costs $3,600, and $3,203 has been raised, including a $500 donation from the Sister Bay Lions Club. The SCAND Auxiliary will make up the rest of the cost.

All proceeds of the SCAND Auxiliary go to support Scandia Village residents and staff. Michele Notz, Scandia administrator, says their contributions through the years total about $4,320,550. Major gifts include: partial funding of the Birchwood Wing that houses the special care unit for Alzheimer’s patients, and a pledge of $2 million ($1.6 million already paid!) to the capital campaign for the new Woodview Building and additions to it, as well as full funding for the first mini-bus, a 13-passenger bus with wheelchair accessibility, two pickup trucks, a Case tractor with skid loader and snowblower, a lawn and garden tractor, a lavatory added to the Newkirk Center, the cost of the building for Bargains Unlimited in 1995, doubling the size of Bargains Unlimited in 1997, the cost of the second addition and parking lot grading and paving at Bargains Unlimited in 2011.

In addition, hundreds of gifts, including new beds and other furniture, special equipment for patient use and much more, are donated to Scandia Village on a regular basis. Except for the co-managers, Rachael Van Valkenburg and Kristine Kordon, Bargains Unlimited is operated by volunteers. More than 150 auxiliary members help there in some capacity every month. 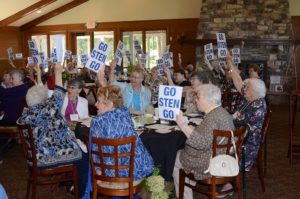 All of the 144 attendees held up GO STEN GO signs and cheered after hearing about the amazing progress Gibraltar High School student Sten Kordon has made since his Aug. 28 boating accident in Fish Creek.

Many of them were part of the Sept. 12 luncheon/style show that added more dollars destined to aid Scandia Village residents. Denise Schramm organized the silent auction and raffle, Auxiliary President Sue Ray Hughes, served as commentator for the style show and Notz expressed her thanks for the auxiliary’s support through the years.

Schramm gave special recognition to Amy Gorham and the Gordon Lodge staff, to the 16 models, the eight members on the social committee, photographer Tad Dukehart, bagpiper Dee R. Dyer, Concepts Bridal and Formal that loaned the tux worn by Jerry Littler, and the five women who visited local merchants to obtain 82 donations for the fundraiser.

“I’ve always known that the Door County community is special,” Schramm said. “It is so welcoming to everyone, whether you’re a newcomer or have lived here all your life. I am boggled at how people come together in an emergency and how generous the merchants are in giving to a good cause, no matter how many events they’re asked to support. This is a place full of good people.”

Oh, remember that $1,600 that seemed like an unbelievable amount of income for Bargains Unlimited’s first season – July through Fall Festival in 1991? “Now,” Rosenquist says, “we think something’s wrong if we don’t take in that much or more on a Saturday!”

Bargains Unlimited is located at 10578 Applewood Road, Sister Bay. The store is open 10 am – 4 pm Monday through Saturday and 11 am to 3 pm Sunday. They are closed Thanksgiving, Christmas and Easter. For more information call 920.854.9669 or visit bargainsunlimited.org.