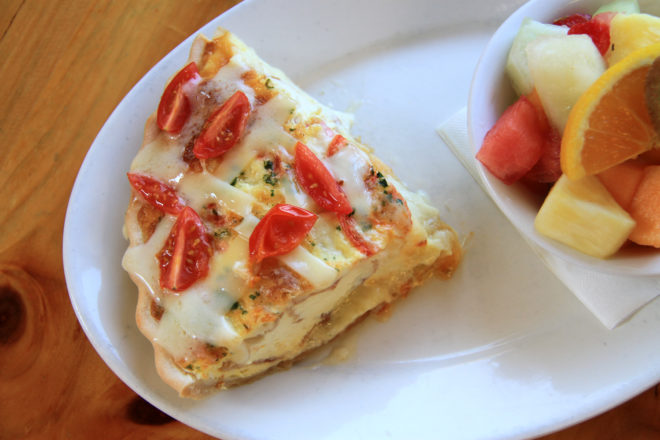 Robert and JoAnne Scaturo’s family-owned restaurant does it all: breakfast, lunch, dinner, bakery, catering, fresh take-home food, a traditional fish boil and even a seasonal food truck called Scat’s Got Your Tongue. This spring marked the start of the 25th season of serving delicious, homestyle food, making Scaturo’s a favorite dining tradition that now attracts multiple generations of families and visitors.

Rob and JoAnne arrived in Sturgeon Bay during the winter of 1994, finding what Rob called the “most bleak and desolate place in the universe.” Despite the cold, gray environment, Sturgeon Bay was a promising location for the couple because JoAnne’s father, who lived in Sturgeon Bay, was willing to assist with an initial investment so they could purchase their own restaurant. That was enough to draw Rob away from a job in Manhattan, where restaurant ownership was out of reach financially.

The couple and their two young sons found an ideal business location, which included both a dining establishment and a home. That allowed them to work the inherently long hours and still be available to raise their family. Working quickly, they completed the purchase in time to open in May, at the start of the busy season.

Having worked in the East Coast food industry, however, their cooking approach took some finessing that first year.

It was a time when dining out revolved around a Friday-night fish fry and a Saturday prime-rib special – and eating authentic Italian food was still an intimidating concept for many.

The Scaturos adapted their menu but kept some of the East Coast and Italian flair. They first served lunch and dinner, then added breakfast the next year when Rob bought JoAnne a grill for Christmas. While he manages the front-of-house operations, she was and is the leader in the kitchen.

“She can produce more food than I’ve ever seen,” Rob said of the sheer amount of food served during the busy months and holiday season. It’s not an understatement to say that Scaturo’s is a powerhouse when it comes to feeding a crowd, and it has become a favorite place where families return again and again.

“In summertime, breakfast can sometimes be an hour-and-a-half wait,” Rob said. “We are perceived as ‘Door County dining’ to a lot of people.” And after 25 years in business, it’s not surprising that there are many loyal customers, and many who boast generations of family members who return to dine each season.

The staff of Scaturo’s, too, includes generations of families. With a staff of around 50 employees during the summer and 30 through the fall and winter, the workers often start around age 14 and stay for many years. Several current employees can claim 15-plus years, and it’s not uncommon to see young workers leave for college, then return each summer and on holiday breaks to keep working for the business.

As a family-run operation, Rob and JoAnne have put both of their sons, Robert and Nicholas, to work over the years once they were old enough to lend a helping hand. It’s a close-knit work environment that – as with any restaurant – is not without its challenges, but the number of longtime, dedicated employees is clear evidence that it’s a rewarding place to be.

The members of the Scaturo family take time at the end of each busy summer season to go on a vacation, and this fall they made a trip to Italy, where they found new inspiration for the menu, including a Tuscan bean-and-ham soup and a lemon pasta that Rob is working on perfecting.

To keep pace with the shifting trends in the ways people dine, the menu has naturally evolved over the decades. The kitchen has stepped away from a nightly dinner service, instead featuring specials – such as Wednesday pizza night – on certain nights of the week.

“It’s a New Jersey-style pizza like I ate growing up, with a thinner crust,” Rob said. Speciality pizzas reflect hometown inspiration: one called the Peterstown, for example, takes its name from the New Jersey neighborhood where Rob was born.

Going into the winter holidays, JoAnne is gearing up for some long days, expecting to cook 50-plus turkeys.

“I’ve never cooked a turkey,” Rob said. “My family turkeys in New Jersey were always dry, but JoAnne’s are so good. I don’t know how she does it.”

The Thanksgiving menu is available through November 25 for ordering ahead to serve turkey, sausage stuffing, jellied cranberry, mashed potatoes and gravy, corn, dinner rolls and your choice of pie. Pick up, reheat and it is ready-to-serve on Thanksgiving Day. Then once the turkey has been passed, it’s on to baking holiday cookie platters, gearing up for holiday catering and hosting holiday parties.

On a daily basis, you’ll find a full bakery case of bread, pies, cookies, scones, turnovers, brownies, pecan rolls and more, plus a deli cooler with soups, quiches and meals ready to reheat at home. One of the trends Rob has observed during the past years has been the increasing popularity of the take-home items, which have often overshadowed daytime sales. The take-home meals in the deli case – such as meatballs, ravioli, stuffed shells, and macaroni and cheese – are easy to prepare and a great value for families.

After a quarter century, business isn’t slowing down, either. The recently added food truck, Scat’s Got Your Tongue, allows Rob to experiment with some new food items and offers a way to take their food mobile. The food truck serves at events, weddings and the live-music event in Sturgeon Bay’s Martin Park, Harmony by the Bay, each week during the summer.

“People often ask me, ‘How could you leave a job in Manhattan?’ Rob said. “It took a few years to get used to the slower pace [of Sturgeon Bay]. It’s different than in Jersey: Everyone is so pleasant. People would laugh at me running around thinking everyone who came in was in a rush! But it was one of the best decisions I’ve made.”

Visit Scaturo’s at 19 Green Bay Road in Sturgeon Bay. The cafe and bakery are open daily at 5 am, except on Sunday, when they open at 7 am. Family pizza and pasta night is Wednesday, 3-7 pm. Visit Scaturos.com for menu details, information on holiday catering, and the current hours and specials.