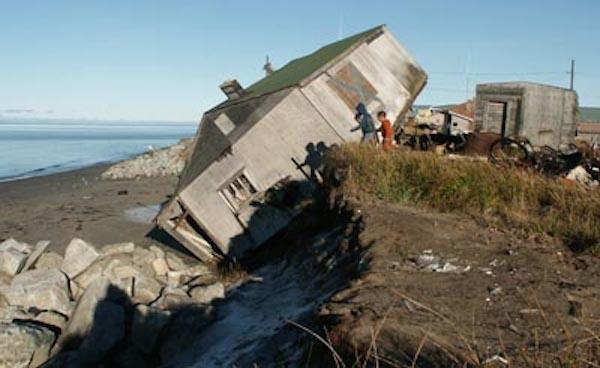 One of many homes in the village of Shishmaref, Alaska, that toppled due to erosion. The village had existed at that location for 400 years. Photo by U.S. Environmental Protection Agency.

If climate change is a hoax, then try telling this to the 600 inhabitants of the Inuit village of Shishmaref, located on a small island in Alaska. On August 16, 2016, residents voted to abandon their island and move to the mainland. The reason: rising sea level, erosion and flooding are eating away their island. Several houses along the shoreline have already been abandoned, and others are threatened. Scientists, and even some members of the community, believe that climate change deserves the ultimate blame. As more glaciers and ice sheets melt, and with the expansion of the ocean as it warms, the effect is to cause a gradual rise in sea level, which is already happening. Just ask the residents of Shishmaref. (2016, Nature, August 25; Albert et al, 2016, Environmental Res. Letters, vol. 11; oceanservice.noaa.gov/facts/sealevel; other sources)