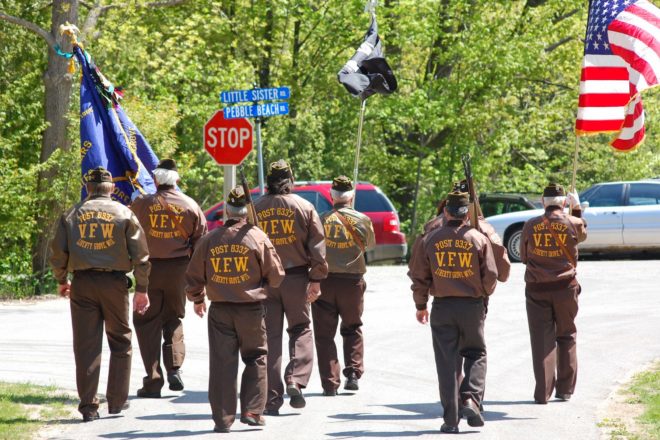 In 2015 one of the top dogs in the American Legion said:  “We shouldn’t assume that we take care of our veterans. Taking care of veterans is something that we have to constantly fight for…”

Scott McFarlane can confirm that sentiment. McFarlane is Door County’s official veteran advocate, with the title of veteran service officer, or VSO for short.

With the approach of Memorial Day, the Pulse contacted McFarlane because he always has high visibility around Memorial and Veterans Days, but, as VSO, how does he spend the rest of the year?

“A lot of people think my job is to do Memorial Day and Veterans Day and shake people’s hands and talk to the media,” he said. “That’s important, but it’s really about two percent of the job, to be honest.”

The other 98 percent of the work McFarlane and administrative assistant Beth Wartella do involves piloting veterans and their families through the labyrinthine government benefits system.

“We are advocates for the Door County veterans, so our mission is to help the veterans and their dependents in any way possible to get all the benefits they deserve,” McFarlane said.

He is struck by the dichotomy of Door County as a vacation playground for visitors, but lift the curtain and behind the scenes there is another story.

“We have a lot of needy veterans in the county, we really do, that we’re helping all the time,” McFarlane said.

McFarlane is a Green Bay native who spent 30 years in the Army, both active and reserve service. He has been Door County’s VSO for 11 years, but has actually only served six of those years because early on he was deployed to various war zones.

“This is really the ideal job to have as a military retiree because it’s awesome being able to talk to veterans and their families all the time,” McFarlane said. “But it’s a hard job, too, especially being a combat veteran and talking to other combat veterans. It’s always tough to deal with the PTSD cases, mental health, the suicidal veterans because, obviously, if that’s the case, it’s drop everything and try to help that veteran and get him all the resources we can. The great part of the job is being able to work with veterans every day. The challenge of the job is working with the federal VA and getting them to grant benefits.”

It has not helped that there has been a revolving door for the national secretary of Veteran Affairs.

“I won’t say it’s a rudderless ship, but somebody needs to take the helm and move forward with some of these decisions that have been waiting,” McFarlane said. “It’s frustrating for us at the county level and for the veterans.”

Yet he is ready to fight the good fight in advocating for veterans in the county.