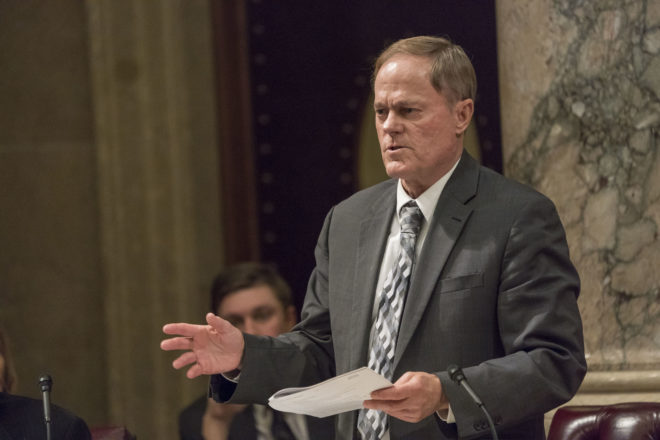 As the great-grandson of Green Bay entrepreneur Frank E. Murphy – namesake of the county park in Egg Harbor – Sen. Robert Cowles R-Green Bay) might have concerns for parks in his genetic makeup.

The Friends of Wisconsin State Parks (FWSP) are certainly thankful for his legislative attention to state parks and showed it by naming him the legislator of the year.

“This award is given annually to a Wisconsin legislator and staff who best champion the advancement of Wisconsin State Parks,” FWSP President Bill Zager said in announcing the 2018 winner. “We are very excited to recognize Senator Cowles for the great work he has done for parks and natural resources.”

Specifically, Cowles was cited for championing Senate Bill 421, the Parks Revitalization Act, which was signed into law in 2017. The act approved the use of up to $4.5 million in unspent Knowles-Nelson Stewardship funds from 2016-17 to complete water infrastructure projects in some of the most frequented state parks.

Rep. Ron Tusler (R-Harrison) was the Assembly sponsor of the bill, and he won the Friends of the State Parks Legislator of the Year Award in 2017.

Still, Cowles was not expecting to be recognized with this award.

“I think our state parks are incredible assets to the state, an economic asset and a social, psychological asset,” he continued. “People need to get away and take a walk, take a swim at their favorite beach. In Door County, those parks are clearly an economic asset. If they weren’t there, Door County wouldn’t be the special place it is. Fortunately there were incredible leaders who had the foresight and guts to set that land aside.  They deserve credit. It’s nice to think back that somebody in my family did that.”

Cowles added that the economic benefits of the state parks system are well documented, which is why he does not understand recent efforts by the state to privatize the system, the best example of that being Eagle Tower at Peninsula State Park.

“I don’t think it’s the job of the private sector to be paying for that. That’s a state asset that should have been paid for entirely by the state,” Cowles said. “Are we going to privatize other pieces of state parks? As long as I’m around, I’m going to be saying no. You’re going down a slippery slope when you do that.”

Cowles also mentioned that 1st District Assemblyman Joel Kitchens has been a strong ally in support for the parks.

“We’ve been talking about some things in the future. Stay tuned on that,” he said.

Mike McFadzen, policy chair for Friends of Wisconsin State Parks, said since 2016 when general revenue funding for the park system was cut, the parks are relying more on the efforts of the 82 Friends groups across the state, which makes it even that much more important to have allies in the legislature who understand the importance of the park system to the state’s economy.

“Our parks are an economic engine that generates $1 billion a year,” he said. “It’s something we can’t neglect. It’s not like a commodity. Once you start cutting, the long-term horizon gets blurred.”

Sen. Cowles will receive the award at the FWSP Annual Meeting in Madison Nov. 10.