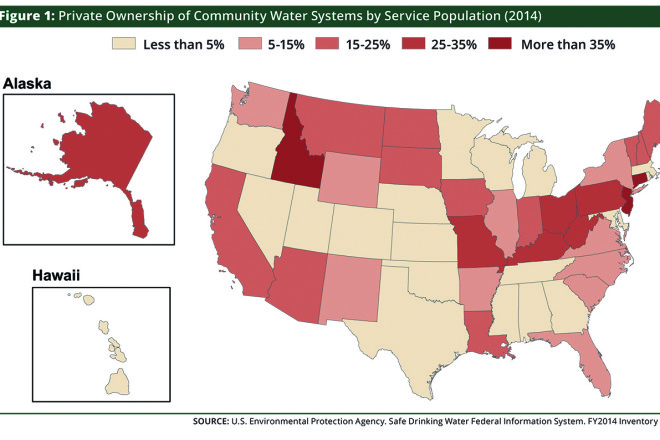 Even though Assembly Bill 554 whizzed through the state Assembly on a voice vote – which usually means it is a non-controversial issue – Senator Frank Lasee’s Senate companion version of the bill, SB 432, ran aground last week in the Senate.

The original bill required that 25 percent of the qualified electorate must petition to hold a referendum to sell the utility within 30 days of a resolution or ordinance to allow the sale by the municipality. That was amended to 10 percent of the electorate within a 60-day time frame.

Aqua America Inc., a Pennsylvania-based for-profit water utility was the only for profit company to testify on behalf of the bill. Testifying before the Senate Workforce Development Committee on Jan. 5, Jim Bilotta of Aqua America said referenda take too long and create “an unfriendly business environment.” Aqua America currently operates in eight states, including Illinois.

A public referendum is currently required for a for-profit utility to purchase a municipal utility in Wisconsin, and, to date, only one large municipal water system – in the far northwestern community of Superior – is run by an investor-owned utility. Conforming to a recently released report that finds customers of for-profit utilities pay higher rates than customers of public utilities, Superior ratepayers pay among the highest rates for users of large water utilities in Wisconsin.

New Jersey just adopted a similar bill to the one advanced here, and, according to the advocacy group Food & Water Watch, New Jersey consumers with privately operated water systems can expect a 64 percent increase in their water bills.

“Aqua America was scared out of the state of Florida by a strong collaboration of consumers who came together over high rates and poor quality of water,” said Mary Grant, a policy analyst on U.S. water privatization with Food & Water Watch. She said the coalition, called Florida FLOW, was largely made up of senior citizens.

The question has to be asked, why this bill now?

At the same Senate Workforce Development Committee hearing where Bilotta testified, Lasee aide Adam Gibbs testified that the state’s Public Service Commission (PSC) “has a list of about 20” municipalities that are looking to divest themselves of public utilities because of failing systems or financial issues.

However, when asked for a list of those municipalities, Elise Nelson, communications and legislative director of the PSC, said, “The PSC is unaware of any water utilities interested in selling/leasing to a private company.”

One of the early supporters of the water privatization bill was the Wisconsin League of Municipalities. However, at its Feb. 12 meeting, the league’s board voted 13-0 to withdraw its support for the bill, joining conservation groups, clean water advocates and others in opposing the bill.

Municipal Electric Utilities of Wisconsin (MEUW) was one of the groups in opposition to the bill because of the loss of local control.

“While MEUW represents municipal electric utilities and the bill only applies to municipal water/sewer utilities we nevertheless feel strongly that a decision to sell or lease ANY municipal utility should have the input of the local citizens and ratepayers via a local referendum as required in current law,” said MEUW Executive Director Matt Bromley. “The bill would remove the mandatory referendum requirement. That was our only issue with the bill.”

In The State of Public Water In the United States, a report examining water rates of the 500 largest U.S. community water systems, issued by Food & Water Watch on Feb. 16, it was found that 87 percent of America with piped-in water is served by public utilities, and that private for-profit utilities charge an average of 58 percent more than their public counterparts.

The report found that the average government utility charged $316.20 for 60,000 gallons of water used in a year while the for-profit average was $500.96 for the same amount of water. The report found the biggest difference between public and private rates in Aqua America’s home state of Pennsylvania, where private systems charge ratepayers 84 percent (or $323 a year) more than public utility customers.