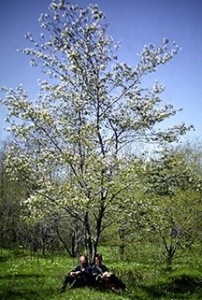 Roy and Charlotte rest under a blossoming Serviceberry tree on their property in 1999.

Many people are relishing the store-bought fruit of one of the most delectable members of the large rose family, strawberries. It won’t be long before other members will also be eagerly picked in gardens and orchards. They include the raspberry, blackberry, pear, apple, plum and cherry.

Years ago this small tree was commonly called “lancewood” because of its outstanding strength and suitability for being made into battle lances. Today a good nurseryman will recommend planting this beautiful and strong tree as a specimen plant near your house because of its great resistance to breakage by ice, snow build-up and wind. Add to these qualities its lovely flowers at the beginning of its growing season.

It is an extremely clean tree, one that holds onto its fruit well into winter. However, it is highly unlikely for this to happen due to the irresistible fondness of many species of birds for its tasty “berries.” In fact more than 50 species of songbirds are known to be attracted to these trees and to relish its fruit.

An outstanding feature of the Serviceberry tree is its tendency to lean away from the shade toward the sun. Consequently a tree that has been planted fairly close to a building will grow away from it, producing graceful lines, thereby drawing the eye away from the still form and shape of a boxy house.

Years ago while doing some exploring north of Baileys Harbor, the dusty old road I was hiking on led through an open gate and, much to my pleasure, surrounding one of the gate posts was a cluster of a half-dozen or more five-foot-tall narrow growths of Serviceberries laden with the best wild fruit I’ve ever tasted and eaten. The berries were deep purple and incredibly juicy and sweet tasting. Our small group absolutely stripped those spindly trees bare!

From what I have read, I tend to believe that people of the Eastern U.S. have referred to the tree’s profusion of white blossoms in May as the “Shadblow” rather than to the entire tree. Our good friend Emma Toft always called the attractive white flowers “Shadblows.” The showy, inch-long, strap-shaped flowers are in full bloom about the time the Shad (fish) make their spring run up the creeks and rivers leading to the ocean.

The story regarding the Serviceberry name is that the first of these plants brought from America to England in the early 1600s were confused with another tree, Sorbus domesticus, a species of Mountain Ash, whose common name was “Sarvis” or Service Tree. The ancient Romans made a beverage from the berries of the Mountain Ash (most likely a fermented drink) that they called “cervisia.” This naturally led to the name of Serviceberry.

Actually the tree does not produce a berry but rather a pome, like a small apple. Munch on a sweet ripened pome and you will soon realize that it contains rather fibrous, pulpy seeds that have a distinctively almond flavor. By all means chew them up and let them gently slide “down the hatch.” Good taste as well as roughage! 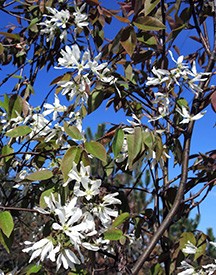 Ripened fruit does occur during June in much of its southern range, hence another name, Juneberry. Here in northeastern Wisconsin they would more properly be called Julyberries. Interestingly the vitamin C content of the pomes is unusually high, 52.84 mg. per 100 grams (Idometric assay). This is the highest listed on the tree fruit charts, even higher than most citrus fruits.

The serviceberry genus, Amelanchier (ah-ma-LANK-ee er) has been around for a long time. Paleobotanists have aged fossils of their leaves at about 50 million years old.

Along with the earlier-than-usual commercial tart cherry trees now in bloom here are some of the exquisite wild cherries. They can be confusing to identify, to say the least. The Pin or Fire Cherry, Prunus pennsylvanica, is usually the first to flower. Its blossoms are arranged in roundish clusters with several fruits coming from one point.

Next to emerge are the Black Cherries, Prunus serotina ((se-ROW-ti-na). Both the Black Cherry and Choke Cherry have their flowers and fruit arranged in the terminal raceme (ray-SEAM), a simple inflorescence of flowers upon a common elongated axis.

Another lesser-known wild cherry, this having fragrant flowers along its stems, is the Sand Cherry, Prunus pumila (PEW-mi-la). These low shrubs hug the shorelines and have rather glossy leaves that are somewhat whitened beneath. Excellent jelly can be made from its dark purple to black fruit.

What a great group of plants is the rose family. Even the father of our country, George Washington, planted Serviceberry trees near the main entrance columns of his mansion at Mount Vernon.

Now they grace the edges of woods and roadsides here, adding that final touch of delicate elegance to the gentle greening of the earth. I strongly suggest, if you can, that you use the “two foot rule,” to get both of your feet in motion and venture into the beautiful mosquito-free woods to savor the splendor of the spring season and, above all, keep an eye out for the Serviceberry trees. Record them in your “memory bank” for future harvesting when the time is ripe.