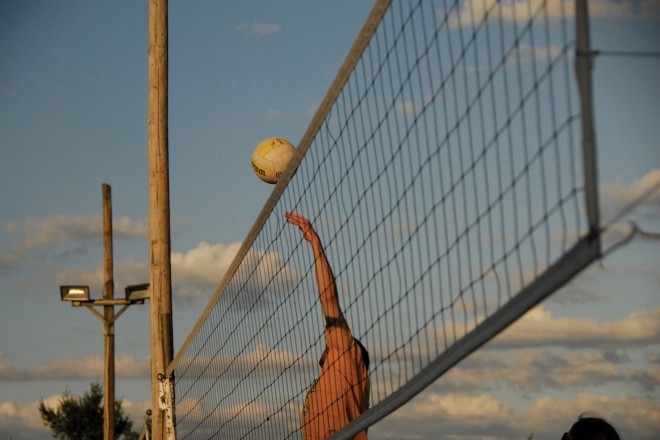 Anyone who’s ever driven down County Highway A on a Wednesday night during summer has probably witnessed it.

At one moment, you’re driving down a dark, unlit, and somewhat desolate highway surrounded by the crickets and moonlight, and then, all at once, like a beacon rising from the shadows, the volleyball courts appear. The sight itself is a bit astounding. On most nights the two courts are surrounded by at least 50 cars with as many people playing, watching, or cheering on the sidelines. Three soaring light posts illuminate the sand courts, casting a pseudo-aura of daytime light upon the people fighting for glory on the court, smiling and laughing all the way. The scene is Wednesday night volleyball in northern Door County, and the almost 20-year-old tradition has become a blissful fixture for the lifestyles of the people who call the Door their home.

What is now called the Northern Door Volleyball League got its start back in 1990 when a group of people used to get together in Fish Creek to play ball. “We used to play on the outdoor court behind Powell’s Restaurant, which is now Sonny’s Pizza,” explains veteran player and owner of Nicolet Beach Rentals and Bay Shore Outdoor Store, Dave Zasler. However, after Powell’s changed hands and the property was sold, their court disappeared as well.

“A few key people like Randy Schuster and Peggy Butchart Olson decided to appeal to the Town of Gibraltar to build our own courts elsewhere,” Zasler remembers. They looked to the town softball field out on County A. After requesting a change of use from the town board, Zasler and his fellow volleyball enthusiasts were able to gain approval to remove the field and construct sand volleyball courts.

It became a community project of sorts. Locals Skinner and Tiny Jarman provided the sand and heavy machinery needed to excavate the courts and install the tree poles now used for lights. Peggy Butchart’s family, who owned Thumb Fun, a theme park once located just north of Fish Creek, were kind enough to donate the electrical panel to get the lights fired up so games could be played at night.

As the Field of Dreams saying goes, “If you build it, they will come.” And come they did. With the organizational help of Butchart, who sought out local businesses to sponsor and form teams, the Northern Door Volleyball Association was born.

The number of teams each season has fluctuated anywhere from six to the current 12, and the sponsoring businesses have also changed over the last 18 years. Businesses have closed and changed hands; court rivalries, player trades, and fresh  recruits  have all contributed to the evolving population of volleyball players in the county.

For Dave Zasler though, one thing is constant:  he gets to play volleyball every summer. “This will be my 18th season playing in the league, and my goal is to play until I’m 60,” Zasler says. With only two years to go, it’s apparent that the dedication from people like Zasler, who spent over a decade serving as the association’s secretary and treasurer, is what keeps this league going.

Zasler himself has played on four different teams since the inception of the league:  Bayside, The Rock of Gibraltar, Wilson’s, and now, Four Season Tree Experts. The team names have changed over the years, but there are a few teams that have remained constant on the tournament circuit since the beginning. Teams like the Bayside and Camp David have been around as long as the league has.

Dave Ellmann, a Fish Creek local through and through, has sponsored his team since the first summer. Ellmann owns Camp David, home to a farm occupied by seasonal workers who come to spend their summers in Door County and enjoy the solidarity of communal living. Camp David is also home to the Fishstock Concert Series, a popular venue for music each summer and fall.

“We’ve had a team since the first season,” Ellmann remembers, “and we’ve never missed a single game.” Ellmann himself has only missed two games in 17 seasons. “One was due to a family emergency, and the other happened when I lost my wind out on the bay. My motor was broken and I couldn’t get back into harbor. I always tell my kids, never abandon your vessel, but I considered swimming back in that night so I wouldn’t miss the game.”

He ended up making it for the third game of the match, much to his team’s relief. “For me, the volleyball league is so important because it’s an activity that guarantees fun for the whole group; it brings all the campers together,” Ellmann says.

Most participants would agree that it is perhaps that notion that makes the summer volleyball league so very great. Players come from all different backgrounds, from all over the country and even the world, to play the game together. The ages run the gamut from 18 to 65, business owners play next to bartenders and dishwashers, and the lifestyles of the players are all so unique and varied, making the league a happy melting pot of individuals.

And every summer for 12 weeks, starting in early June and running until August when the tourists and college students begin to trickle away, the volleyball courts are packed. Each team plays every team in the league once, with the overall best record earning the title of league champion for that season.

Current Vice-President of the Board Jake Danen says that what he loves most about the league is “the community of competitive sport and the relaxed atmosphere . . .  and the feeling of sand between my toes.”

The  league is indeed a combination of “fierce” competition coupled with a laid back atmosphere of community. Regarding the “fierce” competition, Dave Ellmann says with a smile on his face, “You should see my vertical – it’s incredible; you can slide litmus paper underneath my feet.”

While, as in most athletic competition, there may be overly competitive spirits, most of the time the attitude remains fun. For most, winning is not as important as being out on the courts with your friends.

Danen himself has played for four teams since the year 2001. “We haven’t won that many games, but it doesn’t matter, because while winning is fun, the more important thing is being with your friends and playing volleyball. That’s why we play,” he says.

The organization itself is run by a small group of volunteer board members, supported by the Town of Gibraltar and the league’s participants. “The league is great for the community,” says Ellmann. “It’s the idea of a small group of people working to create something that the  whole community can enjoy. That’s the volunteer attitude that the community has and the reason why I like to call it home.”

Giving back to the community is something that remains important to the association as well. Each year, the Northern Door Volleyball Association awards a scholarship to a Gibraltar graduate who played volleyball during high school, exhibits leadership and dedication to her community, and is hoping to pursue a college degree. Hopefully, that scholarship winner will return each summer to Door County and find a spot on a team.

Summer in Door County means reliving traditions and rituals for many families and people. Wednesday night from 7:00 to 10:00 pm is a block of time set aside for the County A courts. The Wednesday night ritual has generated its own set of traditions. Danen recalls one of his favorite rites of volleyball and of summer:  “On the particularly hot nights, we head down to the Ephraim beach to rinse off the sand with sometimes up to 20 other people. It’s really fun to be standing out in the bay with all your friends and watching the sun go down after a game.”

Another ritual that’s come to be a favorite of league participants is the end of season barbeque. Organized by Dave Ellmann and his campers, the barbeque is a 10-year old tradition in which teams are invited to bring their grills and food and celebrate another successful season together. “It’s a really neat way to end the season and say goodbye,” Ellmann says.

Saying goodbye to one another and to the Wednesday night tradition is hard to do at the end of each season. Players find themselves the week after looking at each other sort of blankly and feeling a little lost with no volleyball to play until June. But at the end of a long winter, and with the coming of a new spring, the days start to get longer, and everyone knows that volleyball is right around the corner. When asked if he’d still consider playing even after his 60th birthday, Dave Zasler pauses for a moment, chuckles a bit, and says, “Yeah. I’ll play.”