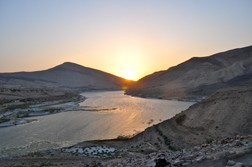 The view at sunset from the archeological site Sadie Weber was at in Jordan, looking at the Wadi al Hasa – the formal name for the valley the team was digging in.

I’ve done some research and drafted some questions for Sadie, who has worked on archaeological digs in exotic locales such as Jordan, Turkey, and Peru. I’m ready to weave my way through discussion of rocks and bones and time periods I’ll pretend to have heard of.

What I’m not prepared for, is cake.

“We’ve got some leftover cake from last night,” says Sadie’s mom, Sigrid Weber, as I sit down in a chair on her porch, opposite Sadie. “We had a party, so we’re coming down off a late night.”

The party was a celebration of Sadie’s visit home, one of the two she generally makes each year. Because of her travels and the way Stanford’s schedule is laid out, Sadie only makes it home for about a week at a time. During this visit she got to stop in Sturgeon Bay for all of five days.

When I ask her what she’s been up to during those five days, she smiles.

“Pretty much nothing,” she says. “We went up to our cabin on Chambers Island, and I slept a lot – and just visiting with family and friends. But basically nothing, which is really nice actually.”

Before her return home, Sadie finished up the last of her three trips to El Hemmeh in Jordan, where she has been studying a historical site that dates back to the pre-pottery Neolithic Age.

“That likely means nothing to you; it means very little to me, too,” says Sadie. “It’s about 12,000 years ago, when plant domestication is first starting.”

Sadie’s study in Jordan focused on food, in particular searching for how wild wheat, barley, and lentils, which would eventually become domesticated, contributed to a population’s food source.

She says food is a common interest at most every site she’s been at, and studying it may be one of her best shots at actually landing a job in the field. But as we continue talking, I can tell the process of determining where food came from is also something that she can’t help but geek out about.

“It’s something that’s clearly common to every culture. You have to eat; you have to get your food,” says Sadie. “To see how different cultures treat different foods or food limitations or taboos, I find that really interesting.”

While Sadie’s most recent studies took place in the deserts of Jordan, her first archaeological find took place here in Door County, at that cabin on Chambers Island, when she was in third grade. 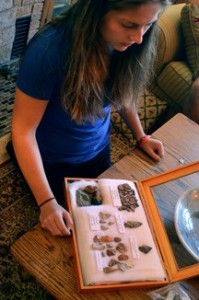 At her home in Door County, Weber shares a few of her archeological finds from over the years, including a spear point she found on Chambers Island. Photo by Katie Sikora.

“We’d go and we’d walk the exterior shore of the island, and one day we decided to do that inner lake, which is where our cabin is at,” says Sigrid. “We took our paddleboat across…and she got out, bent over, and picked up her first spear point.”

The first spear point was followed by another the next day, and a number of other finds over the years, including a large rock that had formerly been used as an ax head.

“It’s like she was always looking down as a child,” says Sigrid. “It was in her nature to look for things.”

Sadie says her childhood finds created a passion for archaeology that just stuck, and encouragement from her teachers helped her decide to pursue an actual career digging in the dirt.

“In high school, there was one teacher I had who studied archaeology, but she didn’t get her Ph.D. in it, and she helped me really get interested in it,” she says. “A lot of people were asking me, ‘Well, what are you going to do with archaeology?’ and the answer was always more archaeology.”

The Webers still keep in touch with a number of Sadie’s old teachers, many of whom were in attendance at the party the evening before.

“Out of 18 people, five were teachers. One couldn’t make it,” says Sigrid. “When she’s home for four days, and she comes home twice a year, and everyone wants to see her, it’s like okay, we’ll have an event.”

Despite Sadie’s infrequent visits home, her parents still manage to stay in her life. Sadie says that, in-between being stranded at the Dead Sea and drinking tea with random strangers, she tries to keep her parents updated about her travels.

“I usually have an international phone…or I’ll send pictures, saying ‘Hey, here’s a bunch of rocks,” says Sadie. “My mom emails me, but I’m pretty bad at emailing.”

“Even when she’s overseas, we’re in touch almost daily,” says Sigrid. “You’re saying goodbye, and you know you’re not going to see each other for a long time, but at least you’ll talk.”

Sadie will soon be positioned just a little bit closer to home when she begins her Ph.D. program at Harvard on September 4. Before that, she’s headed back to Stanford, where she has some analysis to wrap up before she prepares to move out.

Being an archaeologist is hard work, and finding an actual job may be even tougher, says Sadie, but looking for things in the ground is still as attractive to her as it was all those years ago on Chambers Island.

“It’s great,” she says. “I’m basically being paid to be a big kid; I spend my summers just playing in the dirt.”