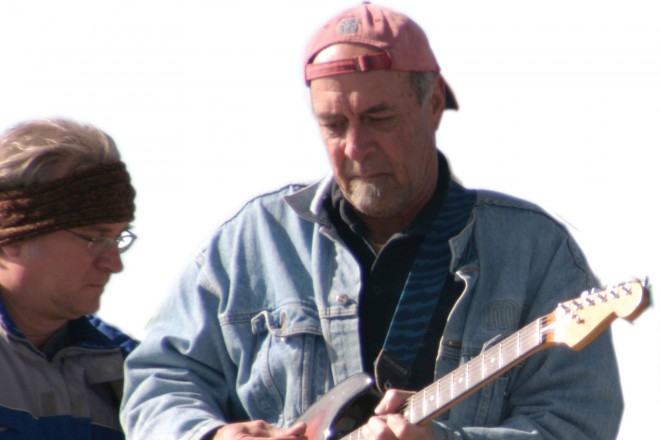 One recent, unusually warm spring evening, on the sidewalk outside the new Ladder House Bar and Grill in downtown Sturgeon Bay, four girls were getting some air, a couple was holding hands and laughing, and a young guy with a tattooed neck and spiky black hair was addressing a couple who happened by, walking their dog.

“You gotta hear this,” he was saying, as the sound of Van Morrison’s “Brown Eyed Girl” drifted into the streets. “Man, they’re awesome. They’re the real deal.” The dog-walking couple looked in the windows. He grabbed her and twirled her around (with some impressive maneuvering of the leash); he played a bit of air guitar. Do you remember when we used to sing, sha la la la la la la la la la la di dah…..sha la la….

Without setting eyes on the band, I could hear the unmistakable sound of Big Mouth, as familiar to Door County-ites as a glimpse of the bluff, the blaze of a fish boil boil-over, or the view of Eagle Harbor in mid-July. Were I to walk inside, I was certain to see some configuration of the usual Big Mouth band members – with or without the Power Horn Tools (a nine piece brass section), but most certainly and as always, with Jay Whitney as front man, lead vocalist, and all-around Big Mouth icon.

Whitney would likely blush to be called the county’s most recognizable musician, though it’s more true than not. It’s a toss-up as to which characteristic is most notable:  his gravelly, perfect-for-blues voice or his six-foot four-inch frame, usually dressed in jeans and sneakers with a jaunt that, from a distance, one could mistake for that of a teenager. Though not officially a “local” (Whitney is from Watertown, Wisconsin), he’s lived in Door County for almost two decades. If my calculations are right, that’s over a thousand nights of weekend gigs.

Whitney’s connection to the county has always been musical. He first visited while playing with the Houston-based band, Blue Blazes, at Florian’s II in Baileys Harbor. The first local musician Whitney met was (the late) John Redmann, then a teenager who was playing at the Common House with Mark Paffrath in the legendary Marvin & the Dogs. Redmann would walk over on his breaks and sit in with Whitney’s band. The two men began a friendship that in part convinced Whitney and his family to make Door County their home. In 1989, Whitney broke into the local music scene on his own, assembling a three-piece band called the Straight Up Blues Band. Redmann eventually invited Whitney to join Pat Judy, Mike Judy and Paul Sowinski in The Amnesians, and Whitney became part of a musical family, firmly entrenched in the Door County music scene.

Watching and listening to Whitney is deceptive; he makes it look easy. But Whitney’s proficiency, and his decision to make music his profession, hasn’t been without effort and sacrifice. In his early 20s, he spent almost two years at the University of Wisconsin-West Bend extension, concentrating on musical theory and making musical connections. And he has, in his own words (and rather tongue-in-cheek), “been practicing every day since.” In addition to playing music, Whitney is also a lyricist and composer, a booking agent, and a recording artist. In the majority of his ventures, he is in charge, making it all happen. “Music is my addiction,” he says, “And if that’s the case, it usually required one to do a little of everything to make it make sense.”

While Door County is a Midwest Mecca for all sorts of classical musicians (Peninsula Music Festival), young musicians (Birch Creek), and folk musicians (American Folklore Theatre, Camp David), Whitney and his current band, Big Mouth and The Power Tool Horns, fills a particular niche somewhere between blues, jazz and rock n’ roll. Whitney originally started Big Mouth in Flint, Michigan and the band found early success playing festivals and local clubs. As members left to pursue other ventures, the group disbanded. When Whitney resurrected Big Mouth here in Door County in 1990, he engaged bassist Paul Sowinski, drummer Pat Judy, and sax player and vocalist Woody Mankowski. Whitney, Sowinski and Judy have been the band’s backbone, while Mankowski has moved in a different direction, but still sits in on occasion. As the band’s popularity grew, they added the Power Tool Horns, which started as a four-piece brass section and has grown to a nine-piece band.

“Big Mouth is a sure thing,” says Mara Lowney, manager of the Bayside Tavern in Fish Creek. “Sometimes bands tire out their audience, or for whatever reason fail to draw in the crowds. This has never been true of Big Mouth. They have a varied play list that appeals to a younger, edgier patron as well as older, stick-to-the-standards audiences. Their appeal is non-generational. Plus, they’re energetic and fun. And Jay Whitney – I mean, can you find a nicer, easier guy to do business with?”

I’ve been playing music as long as I can remember,” says Whitney. “Junior high and high school band, of course. And from then on it was a combination of self-teaching, just hanging out with friends and jamming, and some formal training.”

“It’s hard to remember a time when music wasn’t part of my life. It’s a natural fit for me. Most of my friends are connected to me through music. I met my wife because I played with her brother-in-law, and my kids are both accomplished musicians. I guess you can say it’s a musical life.”

For more information on Jay Whitney and Big Mouth, visit them at ww.BigMouthBand.com. You can also catch them live this summer and fall at several county festivals, at Hands On Art Studio, the Bayside Tavern, and many other venues in and out of the county. For a complete booking schedule consult the website or email [email protected]