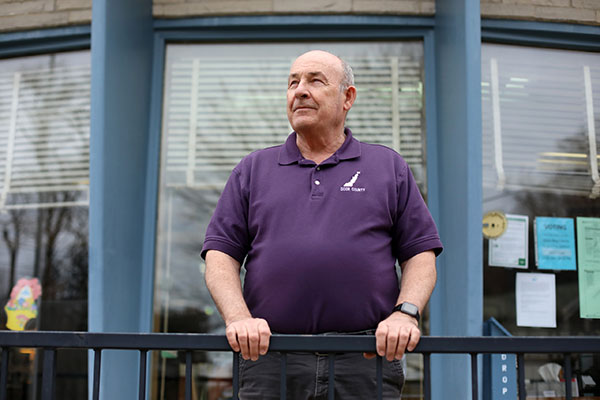 County Board Chair and Sister Bay Village President Dave Lienau is seen in front of the Village Office in Sister Bay, Wis., on March 31, 2020. Photo by Coburn Dukehart, Wisconsin Watch.

Dave Lienau, president of the Village of Sister Bay since 2013, unexpectedly announced his resignation Tuesday, Nov. 24. He will continue to serve as chair of the Door County Board of Supervisors. Lienau resigned to take a position as a village employee: as manager of the Sister Bay Marina.

During its Dec. 1 meeting, the board unanimously selected former president Denise Bhirdo, who has served on the board for 22 years, to complete the remainder of Lienau’s term as president. The village is seeking applications to fill the now open trustee position. Bhirdo said she does not plan to run for president during the April election.

“I really enjoyed serving as village president,” Lienau said, “but my life has changed in recent years. My wife, Carol, passed away a few years ago; I sold my business; and I have been looking at what to do next.”

Lienau’s former board colleagues, including trustee Nate Bell, thanked him for his service and leadership on the board.

“I learned a lot by watching you over the years,” Bell said.

As did trustee Scott Baker, who has served with Lienau for 10 years.

“We’ve accomplished a lot in that time,” Baker said.

The village’s marina position opened earlier this fall. Last summer, Lienau worked at Alibi Dock in Fish Creek and decided to apply for the Sister Bay position, which pays $55,000 annually. He consulted with municipal attorney Randy Nesbitt, who informed him that he could apply for the position but would have to resign from the board. Lienau was one of four people interviewed for the marina position.

“When this whole thing just started, there was not a single administrator on the planet able to foresee this,” Bernhoft said. “I think he did a fantastic job of stepping up to the plate and making decisions that not everybody agreed with, but doing it with confidence. And I give our board a lot of credit for seeing that through.

Sister Bay was the first municipality to declare a state of emergency when the pandemic began to spread, and it immediately implemented weekly emergency team meetings with the board, emergency responders, business leaders, media and management from the grocery store that serves the area.

“You have to think about what those things are that you need to do – messaging, closing parks, messaging to visitors – and be willing to have those tough conversations publicly. That wasn’t easy. And he was doing that at the county, too.”

Bernhoft said that openness led to better community response and cohesiveness as the village moved forward.

Lienau has served on the board as a trustee or president since 2006. When he began his service, many Sister Bay businesses were struggling, and the village was searching for a new identity. In 2007, the board voted 4-3 to purchase Helm’s Four Seasons waterfront hotel, enabling it to double the size of its public waterfront.

“That was a terrible time for the village,” Lienau said. “But it was a once-in-a-lifetime opportunity to change all of Sister Bay.”

Making that kind of public investment was scary, but it also reengaged residents in a bold, new project. In fact, Lienau said that was the only time when people stopped him on the street to thank him for raising their taxes.

“The Helm’s purchase changed everything,” he said. “It had a galvanizing effect on the community. And then the DOT [Department of Transportation] contacted us and said they were going to redo the highway in Sister Bay.”

Those two events ignited a visioning process that produced a 20-year plan for the downtown core that called for making the waterfront public from the Sister Bay Yacht Club to the marina. That plan was condensed when Al Johnson approached the town about buying the parcel across from his restaurant just 18 months after the Helm’s purchase.

By the time Lienau entered his third term as president in 2017, the hot topic in the village wasn’t how to spark development and attract visitors, but how to control them. Those interested in applying for the village trustee position can do so by contacting Beau Bernhoft at [email protected] by Dec. 15.