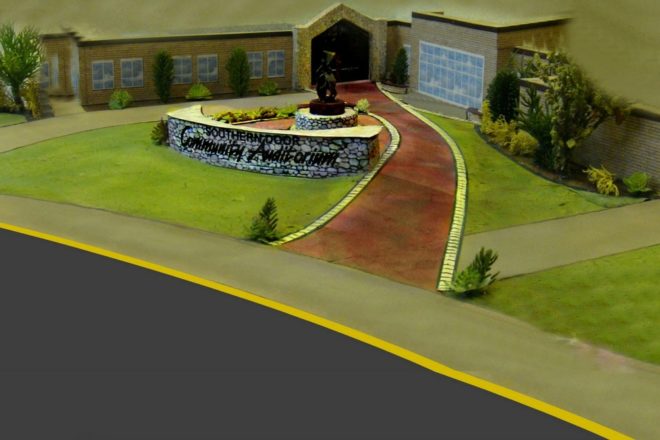 The initial installation of the Southern Door Auditorium Convocation Plaza is expected to be complete by the start of the 2017-18 school year. Rendering by Rob Soukup.

The Southern Door Auditorium in Brussels is celebrating its 25th anniversary season with the unveiling of plans for a new gathering plaza to be located at the auditorium’s entrance.

The existing entrance to the Southern Door Auditorium in Brussels. Submitted photo.

The focal point of the plaza will be an Impressionistic sculpture by artist Robert Soukup, who also collaborated with the Southern Door Auditorium Advisory Committee to create the plaza design.

“As we were talking about that area and deciding that we did want a focal point of a sculpture, the natural person to come to light was one of our own alumni,” Vickman said. “Rob graduated from Southern Door High School, he is widely known for his artistic ability, and he has been involved in helping us celebrate Southern Door in a variety of ways. We reached out to him to see if he would be interested in helping us and we’ve been very pleased with what he’s been able to design for us.”

The 12 to 15-foot-tall concrete and steel sculpture will combine a treble clef and “symbolic” dance to promote the auditorium’s focus on music and performance.

“The sculpture will have a lot of movement to it to give you the feeling of dance,” Soukup explained. “The treble clef alone involves music but doesn’t really involve everything with the auditorium so I wanted to get dance or another aspect so it wasn’t just music. It involved all the arts as much as possible.”

Plans for the Southern Door Auditorium Convocation Plaza include an Impressionist sculpture, seating and engraved bricks. Rendering by Rob Soukup.

The artist, who has been involved with Southern Door musicals for a number of years and was on the original committee for constructing the Southern Door Auditorium in 1991, said the sculpture and plaza design are his way of leaving an impact on a venue that has been important to his personal growth.

“It’s a little bit of leaving a legacy just because of being at that place since first grade and being so involved with the auditorium since day one, the concept and the design of the facility,” Soukup said. “It’s really nice now that we’ve got something great inside to complement that with something great outside.”

While the total cost of the project is not yet known, Vickman said the hope is to fund it with private donations and through the recently announced commemorative brick fundraiser. The engraved bricks will be installed in the plaza.

“We really are encouraging anyone who would like to honor a special memory, a performance that they had in the auditorium, a graduation year, special athletic accomplishment or just their family history in Southern Door to go on our auditorium website and consider purchasing a brick,” she said. “You can also get mini bricks to give as a gift to someone if you’re going to be honoring them by purchasing a brick in their name.”

With the brick sales underway and sponsorships available for local and regional businesses, Vickman said the hope is to have the basic elements of the plaza in place by the start of the 2017-18 school year and with additional funding, install new lighting and additional landscaping.