Residents and parents gathered in the high school library at Southern Door School on April 8 for a special Board of Education meeting focused on what the school will do now that the community voted down a revenue limit override for the 2013-14 through 2015-16 school year.

On April 2, voters decided that the school needed to work within the revenue limit set for it by the state, and now the school board has the task of finding $750,000 in cuts for the 2013-14 budget. 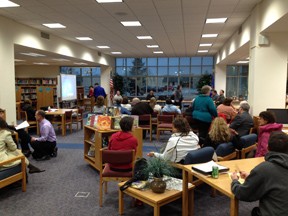 During the public comment portion of the meeting, resident Ken Warren, a proponent of the referendum, asked the school board to weigh their financial decisions carefully.

Superintendent Patti Vickman led a presentation on preliminary planning and options to make up the gap in the school’s upcoming budget.

“What we must consider is that today’s decisions for Southern Door are going to ensure continued success and excellence for tomorrow’s students,” said Vickman. “We need to really think strategically as we go forward now.”

The total amount of money available to the school for the 2013-14 budget is $9.9 million, meaning a $750,000 cut would represent a 7.5 percent cut from all areas of the school budget. Vickman said the district’s “Plan B” was to respond to a no vote with equal cuts in all available areas, as opposed to finding one or more areas to focus in on.

“Singling out particular programs can be viewed as a threat and tends to fractionalize your constituency into competing interest groups,” she said. “The board will need to own all of the decisions that are made, and we will need to follow through with them for the sake of our children and our community.”

“We have some things that we have not done in this district, in professional development, in [special education], in technology, that we need to put in place that the Sturgeon Bays, the Algomas, the Sevastopols, the Luxemburg-Cascos are putting in place,” said Vickman. “We need to retain quality. We cannot make sacrifices that will lose students, because that will affect our aid coming in.”

“We don’t want anyone leaving here because the standards aren’t what we want them to be,” said board member Charles Bretl. “I think that’s the key element here. We need to keep doing what we’re doing within the confines of what we have.”

Board members will be attending a number of retreats to try and determine where cuts will be made, and community members were invited to contact the board or district staff on the subject.

The board must notify school staff of their contract status by May 15, so the majority of the funding situation must be decided before then.

Earlier in the meeting, the board heard an update on an energy efficiency project that it will seek to fund via a revenue limit exemption provided by the state. Under 2011 Wisconsin Act 32, school districts are allowed to levy above the revenue limit for energy efficiency projects that provide long-term cost savings. Southern Door’s project involves roofing upgrades and the purchase of a new water chiller to replace their 40-year-old model.

The project will cost $1,125,000, but will pay for itself within 16 years via utility and operational savings. The potential savings could then be spent in the classroom.

“The whole idea of doing a project like this is to separate that education [component] from the physical building,” said board member Polly Alberts. “You’re looking at a three cent raise in your mill rate. That’s very, very minimal considering you’re going to have the flexibility to put some of that money back into education.”

“I think we need to move on this,” said board member Terry McNulty. “In 20 years I see this paying itself back.”

If the school board passes a resolution on the project during its April 22 meeting, a public hearing on the project will be held on April 29. There’s then a 30-day period where petitioners can file in favor of or against the project.

“I do think there’s some public relations that’s going to have to happen with the hearing so that the community really understands what this is all about,” said Vickman. “Because I can see without having some in-depth conversation that there could be some misperceptions out there.”