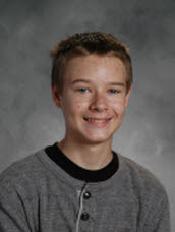 Julian Mulroy, a Southern Door Middle School eighth grader, has been notified by the National Geographic Society that he is now one of the semifinalists eligible to compete in the 2017 Wisconsin National Geographic State Bee. The contest will be held at the American Family Training Center in Madison on March 31, 2017.