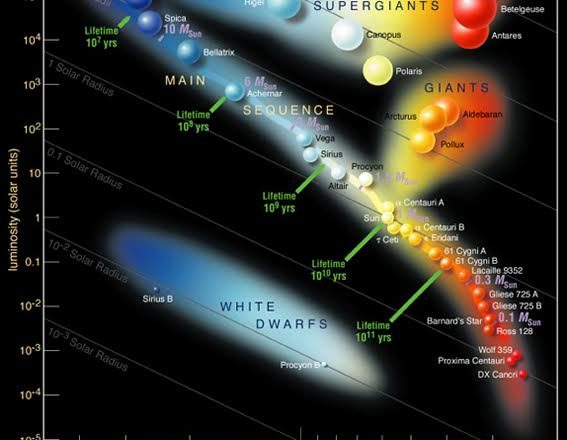 Have you noticed that stars you see in the night sky vary in their color? For example, Betelgeuse in Orion is red, stars like our sun appear yellow, and some really hot stars are actually blue. The reason is straightforward: the temperature of the surface of the star, where the photons (quantum of electromagnetic radiation; a massless particle of light) that reach our eyes originate, determines its apparent color.

All stars have at their center a fusion furnace. Under extreme pressure and at temperatures in the millions of degrees Kelvin, hydrogen nuclei (protons) are fused together to produce helium nuclei, with two protons each (stars fuse other elements too, but hydrogen is the most abundant fuel). Each merger converts a tiny amount of mass to produce a little bit of energy, according to E = mc2. Total the amount of energy released by a vast number of hydrogen-to-helium mergers occurring continuously, and one gets an immense amount of energy produced every second.

This energy from the core of the star is in the form of high-energy photons, which energize the matter further out from the core. The energized matter in turn emits more photons, and so on, until the energy is finally released at the surface of the star as photons of radio, microwave, infrared (heat), visible (light) and ultraviolet radiation. On average, it takes about 100,000 years for energy produced in the core to negotiate its way to the surface!

The visible “surface” of a star is called the photosphere, which is a layer of hot gas a few hundred kilometers thick. Further out are the chromosphere and the corona, but they are tenuous or magnetized and give off little light in comparison. Because matter in the photosphere is much less dense than at the core, the average temperature is a lot cooler (see Boyle’s gas law). The photospheric temperature of stars can range from approximately 3,700° K for red dwarfs to 33,000° K for blue giants. The average temperature of the photosphere of our sun is 5,777° K with a density of 0.0000002 grams/m3, many thousand times less than the Earth’s atmosphere at sea level.

Any material object when heated will emit a spectrum of electromagnetic radiation, or glow. Hot coals, toaster elements, an incandescent lamp, and the atoms in the photosphere of a star will radiate a range of wavelengths just because they are hot. Physicists call this blackbody radiation, because they assume that the glowing matter does not intrinsically give off any radiation of its own (no absorbed light, radioactivity, etc.), but emits radiation only because it’s been heated.

The Hertzsprung-Russell diagram above plots the surface temperature of stars vs. their inherent brightness. The stars along the diagonal are main-sequence: stars in the normal, hydrogen fusing stage of their lives. Can you find our Sun? The total mass of a star determines things like its size, density, luminosity, how fast it burns hydrogen and its lifetime. For example, more massive stars burn brighter and hotter but faster. The color, or photospheric temperature, of a star (main-sequence only) therefore is a function of the mass of the star. Fact: about 88 percent of all main-sequence stars in the universe are red or orange.

The Door Peninsula Astronomical Society meets the first Tuesday of the month at 7 pm at the Astronomy Center off Utah Street in Sturgeon Bay. Our next viewing night is Saturday, May 7 at 7pm.