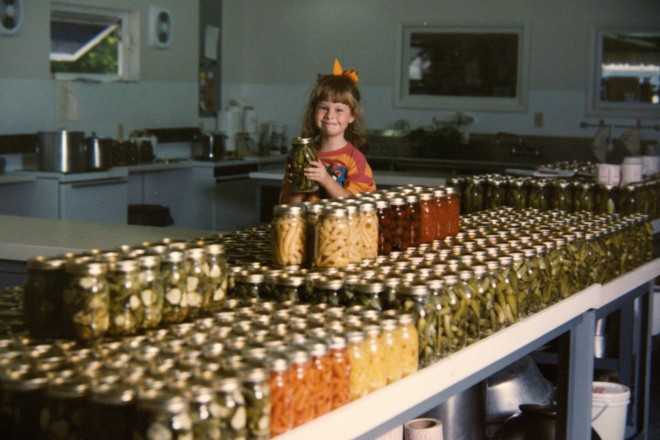 If a story is good, it is worth telling over and over again. Such is the case with Bea’s Ho-Made Products.

In 1962, Beatrice (Bea) and Bob Landin were raising their two daughters and working their Gills Rock farm. Their elder daughter, Linda, put a picnic table out by the roadside and sold some cherries to drivers-by; they went quickly. The next season, Linda added some of the extra beans and cucumbers from the garden. Those went quickly, too. After Linda’s grandmother’s chopped cherry jam also sold well, Bea realized that her daughter was onto something.

Bea squeezed some extra time out of her already packed schedule and began canning at night. In the farmhouse built by great-grandfather John Landin, Bea and grandma Adella packed their jams in old peanut butter jars and sealed them with paraffin wax, which was the old-fashioned method that they initially used.

Bea’s younger daughter Lori reflects back on their humble beginnings. “We would make jam every night from 6:30 till 10:00. My job was to hand stamp all the jars. The big payout was that I would get to eat Swanson pot pies and watch Johnny Carson,” she says.

From there, things expanded bit by bit. Business soon became too big for the picnic table and they moved their operations into the remodeled chicken coop across from the house. All the while, Bob and Bea were still farming in the summer and running an upholstery business in the winter. Bob also drove a school bus for Gibraltar up until 1980. In 1974, Bob purchased The Shoreline Motel and owned it for several years until Bea said enough was enough. They sold the hotel, gave up their upholstery business and concentrated their efforts on producing and selling their growing collection of specialty jams and goods.

To date, there have been seven additions to Bea’s. Lori remembers, “We just kept adding on as we outgrew the space and hoped to God that they would still come.” Throughout the growth, there were certain parameters that had to be maintained. They always insisted on making their products in small batches, using only the best fruit and sugar. They also didn’t want to grow too big. “We tapped into a niche. With so many things being mass produced, customers were looking for something simple and good, just like their moms and grandmoms used to make.”

They started with some of Adella’s recipes and added as they went along. “We have had so many people come through our kitchen along the way and they have all influenced what we d 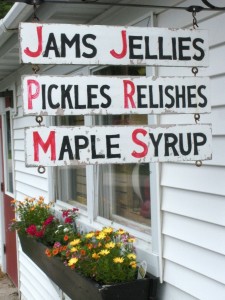 o. Even though we started with my grandmother’s recipes, we aren’t afraid to try new flavors. Our basic philosophy is if it’s really good, you sell it.” Their current product range includes 43 jams, 20 jellies, 23 pickled products and 29 miscellaneous sauces.

One person who has spent a lot of time in Bea’s kitchen is general manager Jeni Tveten. She began in 1993 when 20 or 30 pies a week would have been a large number. Now, Jeni bakes a couple of hundred pies a week just to keep up with the demand. Since she personally hand rolls and crimps the crust of nearly every one, she can attest to their popularity. Cherry is an obvious favorite in addition to other staples such as four berry, Dutch apple, patchwork and Door County medley.

Customers can watch Jeni and the rest of the Bea’s crew make everything in the kitchen through a large window in the store. Some more skeptical customers have wondered if everything is really made there. The answer is yes. If a jar has a Bea’s label on it, it was definitely handmade in Bea’s kitchen. Everything is hand washed, hand poured, hand packed and hand labeled.

When Jeni started at Bea’s she dabbled in making jams at home, but didn’t know all that went into canning. So Bea taught her how to make all the things Jeni had seen her own mother and grandmother make while growing up in Ellison Bay. Jeni, along with two other employees, were also educated and certified with the State of Wisconsin.

Bea and Bob retired from the business in 1995 and left it in the capable hands of their daughters and long time employees. “My sister and I own the business, but it really belongs to our employees,” Lori explains. “They treat it as though it is their own.”

Everyone has their respective roles. Dave Manson, a licensed processor who has been with Bea’s for over 25 years, continues to help with the processing and also oversees most of the administrative duties, including advertising. Celia, his wife, handles the books. Jeni bakes and oversees the whole operation. Jeni’s husband, Charlie, is the warehouse manager; her mother, Judy Nelson, helps with processing and customers. Mary Anderson is the head processor, while Sharon Davison and Jan McOlas 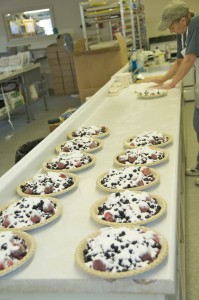 h work in the store. This well-honed team is responsible for processing over 17,000 pounds of locally-grown cherries and as much as 15 tons of cucumbers every year. Their jams and pickled products, while always popular regionally, have gained more national attention through their inclusion in the Foods Across America specialty foods website.

Every once in a while, a college student pursuing a business degree will call and ask for advice. They want to know how it all came together, what the formula for success is. Lori usually laughs and says, “Buy a picnic table and a coffee can.” Yet really, it isn’t something that can be easily explained. What started as a young girl’s attempt to make a little extra spending money in a very unlikely location grew into something much more than anyone could have imagined. Between milking cows, upholstering furniture, driving a bus route, and raising two daughters, Bob and Bea started something exceptional. Married in 1947 and together every day from then until Bob’s passing in March of 2003, the couple just seemed to know what their customers were looking for. Bea, who now lives in Florida for the most of the year, comes back to help during the busy cucumber packing season. Lori and her daughter, Kaitlyn, are also there. While Bea would probably tell you that family is relatively inexpensive labor, there is something special about three generations working side by side preserving much more than jams.