On good days Chuck Wagner’s faucets run with the clear water everyone expects to see come out of their tap. On bad days, his water is the color of Mountain Dew.

No matter the color, he doesn’t drink it. Wagner’s family has been drinking bottled water at his Luxemburg home in Kewaunee County since a well test found elevated levels of nitrates and bacteria in his water in 2001. The contaminants are believed to have entered the water table from surrounding farm fields where manure is spread. 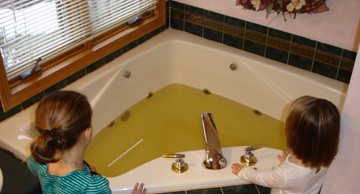 Chuck Wagner’s grandchildren look into his tub, full of contaminated water from his Luxemburg well.

His home is surrounded by 1,600 acres owned and rented by Kinnard Farms, a large Confined Animal Feeding Operation, or CAFO, with 2,500 cattle. Those cattle produce a lot of manure. Each cow produces as much waste as 18 people every day, and that waste is spread as liquid manure on the fields near Wagner’s house, just as it is on hundreds of thousands of acres in Door, Kewaunee and Brown counties.

The manure is a valuable resource, full of nutrients, particularly phosphorous, that crops need to thrive. But not all of those nutrients stay in the shallow soils of Northeast Wisconsin, instead slipping into the porous, karst topography that sits below the soil or running off the fields into waterways like the Fox River, and eventually, into Green Bay and Lake Michigan.

But Kinnard Farms is following the standards the state has set and has looked into other solutions, said Wagner, a member of the Kewaunee County Board of Supervisors and the Wisconsin Land and Water Conservation Board.

“The problem,” he said, “is that the standards that the CAFOs have to follow aren’t strict enough.”

Wagner’s view is shared by Brown County Conservationist Bill Hafs, who said the science clearly shows that phosphorous is a problem and that agriculture is the source of at least half of the area’s phosphorous pollution.

“The Fox River is pea green soup in August in Green Bay,” he said. “That doesn’t need to be studied any longer. It’s time to do something about it.”

Hafs was dismayed when the Wisconsin Legislature’s Joint Finance Committee passed a motion in May to delay implementation of water quality rules, including requirements that industry and communities dramatically reduce phosphorous levels in sediment runoff by 2013. 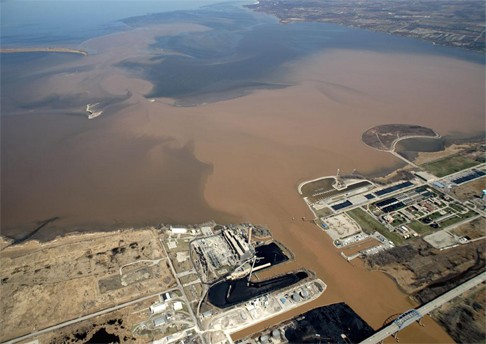 The budget bill delayed implementation of Nonpoint Source Pollution Standards for two years and opened up the possibility of recreating the standards entirely. The delay is intended to provide more time to study the economic impact to industry and municipalities of adhering to more stringent caps.

“In today’s world, the phrase is that the delay is to make it more business friendly,” Schuster said. “From a water quality and environmental perspective, it weakens the rules. This is definitely a step back.”

“I was told the initial intention was to drop the rules entirely,” he said. “I guess that eventually enough people got the Governor’s ears to just delay it.”

Scott Manley, the director of environmental policy for Wisconsin Manufacturers and Commerce, said the rule comes at too high a cost for marginal improvement to water quality.

“Industry and municipalities account for roughly 20 percent of phosphorous pollution,” Manley said. “They already have stringent limits. Is it worth the great expense without making meaningful improvement to water quality? This is not a comprehensive effort.”

The Wisconsin Department of Natural Resources estimates that compliance with the rule will cost industry and municipalities up to $900 million over 10 years. Those studies, however, do not take into account the potential negative impact of not solving the phosphorous problem, including losses in tourism, real estate values, and commercial fishing along the shores of Green Bay and Lake Michigan.

“What’s the economic value of swimming, tourism, charter fishing?” Hafs asked. “What is the net cost of the rules?”

Hafs, however, agrees with Manley’s assertion that implementing stringent standards on industry doesn’t come close to addressing bulk of the phosphorous problem.

“He’s right on,” Hafs said. “This is a backhanded way to get at the problem. Why not get right at the source?”

That source, Hafs said, is agriculture. There are 18 CAFOs of over 1,000 animal units in Brown County and 17 in Kewaunee County. A CAFO of 1,000 cattle produces the waste equivalent of 18,000 people.

“If you plopped a city of 18,000 people into the middle of Door County today, you would probably demand that it have a water treatment plant right?” Hafs asked rhetorically.

Don Niles owns Dairy Dreams farm in Luxemburg, with a herd of 2,800 cattle. Niles defends big farms and despises the term “factory farm,” but he recognizes that agriculture has a large role to play in improving the area’s water quality.

“We need to find better ways to handle it, the question is how much regulation is required to do it,” he said.

Niles said nutrient management plans and manure injection technology, in which liquid manure is injected into the soil at root level rather than spread on the surface, are possible solutions.

Hafs doesn’t expect farms to have water treatment plans, but he does believe a lot more can be asked of them, especially large farms. He suggests that producers that receive federal farm subsidies and CAFOs be required to produce a farm conservation plan. The plan would include soil tests every four years, buffers surrounding all owned and rented property, improved manure storage, and require ownership of three acres of cropland for every animal unit.

Wagner, meanwhile, has advocated for Carbonate Bedrock Management Zones, which would form a panel of geologists, farmers, and conservationists to determine the best guidelines for regions with shallow soil and karst topography, such as that which exists in Kewaunee, Brown and Door County.