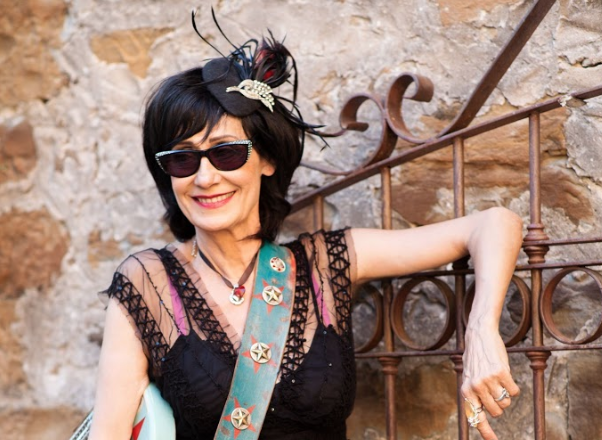 Like blues? Don’t miss Rosie Flores — plus some jamming with Ruby James — at the Tambourine Lounge Aug. 27. Submitted.

If you go to rosieflores.com and listen to the music she has posted there, you’ll get a good taste of her longtime interest in the blues because, as she sings in “Rosebud Blues,” “This country girl knows how to play the blues.” And then she shows you what she means with a blistering guitar solo.

“If you look back at my catalog, I’ve been recording blues all the way back. My singing style is bluesy,” she said in a recent telephone interview to preview her Aug. 27 show at the Holiday Music Motel’s Tambourine Lounge in Sturgeon Bay.

“I started playing guitar to blues records when I was 15,” she said.

In high school in her native San Antonio, she and three musically inclined pals, including her brother, would listen to and play along to blues records.

“We would sit around and figure out B.B. King songs,” she said. “We’d listen to the Rolling Stones, and they really helped to bring the blues back to the forefront of American music. We would play the records and slow them down. We were teenagers discovering the real blues.”

Flores had a reason for featuring bluesy songs on her website, given so much to choose from in an eclectic recording career that includes 13 studio albums since her 1987 self-titled debut. She proved herself in country and rockabilly releases that always included something bluesy, but it wasn’t until her latest recording, this year’s Simple Case of the Blues, that she turned her full attention to the blues.

“If you look on my website – what I did to try to prove a point about this – there are six songs you can listen to. They’re all the blues stuff I cut over the years, so people don’t think this is coming out of nowhere,” she said.

On the new record, Flores reached all the way back to those teenage years on the second track, the beautiful and soulful “Mercy Fell Like Rain.”

“That was written by one of my high school buddies,” she said. “I called him up and said I was going to do a blues record. I’m trying to get away from rockabilly. It’s kind of starting to bore me. He goes, ‘Let me send you some songs. I’m writing gospel.’ He sent me a couple songs, and ‘Mercy Fell Like Rain’ really spoke to me.” (I’m willing to bet it will speak to you as well.)

Flores said her musical journey has really been shaped by her wide-ranging musical interests – from blues to British pop and girl groups of the 1960s, to classic country singers and early alt-country groups before the term was known.

“Steel guitar grabbed me hook, line and sinker with the Flying Burrito Brothers and Poco, and the harmonies reminded me of the Everly Brothers,” she said. “That stuff dragged me into classic country like Tammy Wynette and Loretta Lynn. I just became enamored of the whole country sound and fell into rockabilly because that’s where blues and country met, a marriage of both those things. It was so easy for me to jump into the rockabilly thing.”

She spent seven years in Nashville and found herself out of sync with the scene.

“I really became disenchanted with where country music was going on the radio,” she said. “Everybody was, ‘We like your style, but we don’t think Shania Twain can cut your style.’ And I’m like, ‘I don’t want Shania Twain to do my songs.’ I got disenchanted with the whole Nashville thing. When I moved back to Austin, that’s when I really started thinking back into the blues and listening to a lot of the local bands that play Antone’s. I started writing those songs.”

Ironically, it was while Flores was living in Nashville that she hooked up with two musicians who were instrumental in her new blues record.

“I was sitting in with Dave Roe [bassist for many major country artists] and Kenny Vaughan [guitarist with a long list of credits that includes years with Marty Stuart’s supporting band, The Fabulous Superlatives]. They had a blues night once a week. They were always asking me to sit in and were like, ‘Oh, my God!’ They were so complimentary. They said, ‘We need to do a blues record on you.’ They made it happen. I owe them. I owe them big time. It was them that really forced me back into it.”

She laid down the basic tracks in Nashville with Roe, Vaughan and Los Straitjackets drummer Jimmy Lester.

“I sat on that hard drive for about a year,” Flores said. “I ran into Charlie Sexton [guitarist, Arc Angels, Bob Dylan] and the engineer [at Arlyn Studio in Austin, Texas],” she said. “One night in the studio we all decided, let’s finish the record, with Charlie putting all the overdubs together. He just put the magic touch on all the overdubs. He added some more percussion and rhythm stuff.”

Sexton also contributes rhythm guitar work, but when Flores asked him to take over one of her solos, he said, “I’m not touching it. You’re the San Antonio Switchblade.”

“Every time one of my solos would come through, he would punch the air with an air switchblade,” Flores said of Sexton. “I just adore him. He’s so much fun to work with. I so wish I could cut the record there from scratch and do it all over again.”

If you buy the downloadable album, you get two extra tracks – covers – that are not on the physical record: The first is a spine-tingling version of Stevie Winwood’s great Blind Faith song “Can’t Find My Way Home,” and the second is a ripping version of Mose Allison’s “I’m Not Talking” that pays tribute to one of the other bands that have covered the song, The Yardbirds, and Flores’ favorite guitarist, Jeff Beck.

“I feel like it’s my song,” she said of “I’m Not Talking.” “I threw in a nod to Jeff Beck with a little bit of a guitar solo from another Yardbird song called ‘Over Under Sideways Down.’ [She sings the easily recognizable riff.] That’s from that song. The only people who are going to get it are guitar players or Yardbird freaks.”

She said the “Can’t Find My Way Home” track was actually recorded several years ago, featuring her longtime accompanist Cindy Cashdollar on guitar.

“I had a really amazing compliment by a British guy who was in the audience the other night. I play it so much more rock ‘n’ roll when I do it live because I really get to soar on the guitar,” she said. “This guy was in Austin with his wife. He came up to me and said, ‘Your version’s even cooler than Stevie’s, and he’s a friend of mine.’ I took that home with me.”

Flores is performing with her band at the Blue Opus in Green Bay on Aug. 23, but her Tambourine Lounge show will be solo.

“I love performing solo because there are so many songs that I have written. A lot of times they don’t get heard because my concert show is usually concentrating on the new record,” she said. “When I get a chance to tell stories and sing songs from my past records, it makes it a really special evening.”

However, she adds, singer Ruby James will join her on some songs.

“I’ll have Ruby James jump up on the last part of it with me so we can rock out. She’s actually on the tour with me,” Flores said. “I’m excited to be performing with Ruby James. Pound for pound, there’s not a better female singer I’ve ever sang with, so it’s really going to be icing on the cake.”

She also mentions that the Rosie Flores merchandise she’ll be selling includes turquoise vinyl editions of the new record.

“The vinyl is just gorgeous. It’s the ’57 Chevy blue,” she said. “It matches my nails. My nails have to match my vinyl and my guitar.”