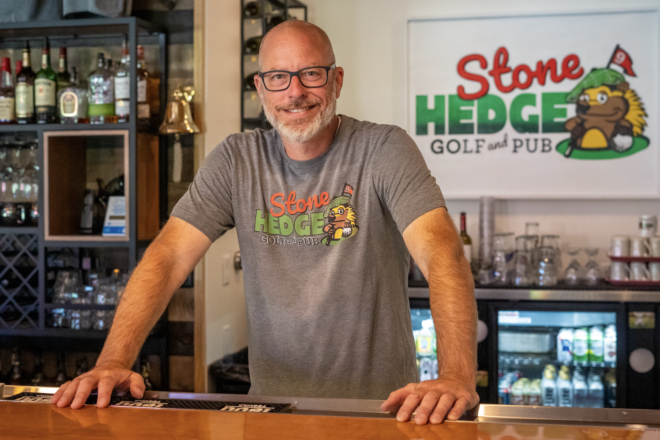 Owner Kevin Wehrenberg hopes the pub will be a place where locals and visitors will gather to catch up and catch the game. Photo by Rachel Lukas.

When Stone Hedge Golf Course was listed for sale last October, it took Kevin and Erin Wehrenberg less than a day to put in an offer. He was taking his youngest son to school when their realtor texted him to ask whether they had any interest in it.

“I looked at my son, who had just taken up golf last summer, and he just had a huge grin on his face,” he said. “By the time I picked him up from school that day, we’d put in an offer, and by the next day, they had accepted.”

The next steps involved learning how to run a business in Wisconsin. The Wehrenbergs lived in Los Angeles, though they’ve owned property and a house in Door County for the past decade, and Kevin’s been jumping back and forth since they bought the property. They had been looking for a business in the area for when they retired here.

“I was pretty nervous,” he said. “Really, the only time I ever worked in the food industry was when I worked at McDonald’s as a 17-year-old.”

Wehrenberg talked about a time in January when a man was plowing the snow in their driveway.

They kept the fish fry, and everything else they’ve been learning as they go, Wehrenberg said. The myriad elements of running the business – from finding bartenders to deciding which plates to serve the food on – were new decisions the couple was learning how to make on the fly.

He’s an open book about all that he didn’t know when he stepped into this new venture, but from the outside, you’d never guess.

As a Wisconsin sports fan, Wehrenberg knew what he liked in a sports pub and thought his customers might like those things, too. That’s why the pub has three huge TVs mounted in a way that everyone in the bar can see the game that’s on. They also refreshed the walls and the bar, and fleshed out the outdoor seating plan.

It’s a sleek pub with a wall of windows overlooking the golf course, and because it’s located slightly outside the main Egg Harbor corridor, the outdoor seating is laid back and free from constant car noise.

Wehrenberg said he wants the pub to be a place where people can watch sports or swing by when other nearby restaurants are full. He said one night after closing the restaurant, they spent more than an hour looking for a place to eat.

“It’ll be evening, and nobody’s here. Last night I sat out there, and it couldn’t be more beautiful out there, looking at the sun going down behind the ninth green,” he said. “We’re Door County’s best-kept secret.”

Wehrenberg said that so far, many people in the area either don’t know Stone Hedge is there, or they don’t associate the golf course with a restaurant. But that could change with a playfully titled menu that offers items ranging from “sand-wedges” (sandwiches) and burgers to “on the green salads” and “appa-tee-zers.” A non-syrup breakfast – as in no pancakes, waffles or the like – is also served on Saturdays and Sundays.

Stone Hedge’s chef is Aileen Carroll, who’s worked in the business for a decade, starting in Milwaukee before moving to Door County and working at the Bayside Tavern. She landed at Stone Hedge in May after her boyfriend, a bartender at the Bayside, met Wehrenberg right as he was looking for someone to take up the role.

When they were working on a menu, Wehrenberg said he wanted to have high-quality pub food to serve year-round, though the days and hours may vary throughout the year. But because it’s a sports-centric pub, he said he wants people to be able to visit throughout the football season and during the rest of the year for basketball and other sports during the county’s off-season.

“I don’t typically do things that are easy, I suppose,” he said.

But the hard work appears to be paying off, even this early in the game.

“When everybody leaves here, they say, ‘You know, that’s some of the best food we’ve had up here,’” Wehrenberg said. “We’re finding our audience, I guess.”

Find more details, including the menu and hours, at golfstonehedge.com.