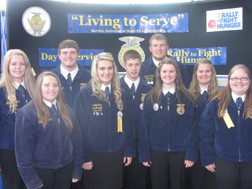 Nine members of the Southern Door FFA chapter attended the 2014 State FFA Convention in Madison, held June 9 – 12. Students left on Monday morning and headed to Milwaukee to deliver the barrel of can tabs that the Southern Door Agriscience Department had collected for the past three years. The barrel of can tabs was donated to the Ronald McDonald House in Isaac Sorenson’s name.

The students also visited the Milwaukee County Zoo, planted a portion of the community garden at the UW Health Clinic in Verona, and assembled more than 40,000 packages of macaroni and cheese meals to be distributed in the Madison area as part of the FFA Rally for Hunger Event.