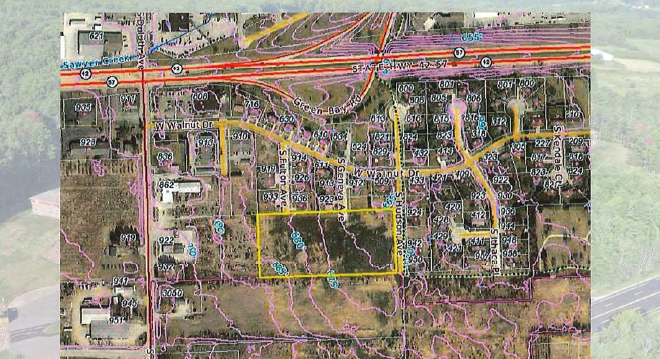 This map shows the 5.5-acre site off of South Hudson Avenue that the City of Sturgeon Bay wants to develop for affordable housing. The Plan Commission last month decided not to recommend proposals it received from two developers seeking to build houses there with a selling price of more than $300,000. Source: City of Sturgeon Bay.

The Sturgeon Bay Plan Commission wants the price to be right for housing in a planned development on city-owned property off South Hudson Avenue, but the city hasn’t figured out how to get there yet.

The commission – which decided last month not to recommend either of the two proposals it had received from Duquaine Development and S.C. Swiderski – directed city staff members to come up with ideas for developing homes on the 5.5-acre site priced below $300,000.

“We’ve already talked about a number of ways that we can perhaps get there, either with one of these developers or taking a different path,” said City Administrator Josh VanLieshout. “We’ll have to work on that and evaluate those options.”

The commission is recommending that the vacant land be rezoned from Agricultural (A) to Two-Family Residential (R-3), where a medium-density residential development could be located as called for in the city’s comprehensive plan.

Community Development Director Marty Olejniczak said the city purchased the land for around $53,000 and then requested proposals from a number of developers on how they would develop the site with single-family housing, and possibly some two-family development.

Olejniczak said both proposals called for buying the land for $1 and having the city put in the infrastructure.

“It’s a pretty good ask,” he said. “In both cases, they are saying that due to the high cost of construction, you’re looking at sale prices that are significant,” or more than $300,000.

Olejniczak said it would be difficult for the city to go ahead with the development as proposed if the city wanted to try and develop more affordable housing, given the likely infrastructure and land costs of around $45,000 to $50,000 per lot.

Other options include working with one of the two developers to build lower-cost housing; contacting other developers; having the city be the developer; or looking at other development schemes, like manufactured housing. Olejniczak said the city wouldn’t have to make a profit if it developed the site, which could be one way to get the cost down.

Because the housing market has changed with higher expenses, VanLieshout said it’s likely the city will have to “play the role of developer in some way” to lower the price point for the homes by finding a building partner rather than a developer partner.

“It’s not unusual for municipalities to extend sewer and water and build roads,” he said. “That happens all the time. All the time those costs are recovered by special assessment. But I think if we try to do that in this case, we’d probably price those [homes out of reach] for families who would fall into the county’s median household income.”

VanLieshout said “more creativity is needed” to construct affordable housing on the site, such as using the city’s allocation of American Rescue Plan Act (ARPA) funds, or with the additional year of tax increment district (TID) funding the city will receive from extending the life of TID #1 to use for housing.

“I’d ask the Plan Commission to give us a little bit of time to put a pencil to it and see if we can come up with a creative solution to get us into that more desirable market price,” he said.

The council approved a resolution last month authorizing additional property taxes generated from development (i.e. tax increment revenue) in the final year of TID #1, which was created in 1991 for the Industrial Park, to be used anywhere in the city.

The resolution directs 75% of the final increment funds to be used for affordable housing, and defines ‘affordable’ as costing no more than 30% of a household’s gross monthly income. The remaining 25% of the funds can be used to improve housing in general.

City Engineer Chad Shefchik said there was nothing wrong with the housing proposals Duquaine Development and S.C. Swiderski submitted, but it would be “bad optics” for the city to use money intended for affordable housing on either proposal.

Commission members expressed their preference for developing the site with affordable housing.

“For me, affordable housing is our biggest need,” said Commissioner Mark Holey. “That’s where I would lead towards. However you get that done, it’s up to you guys [on the city staff] to figure that out.”