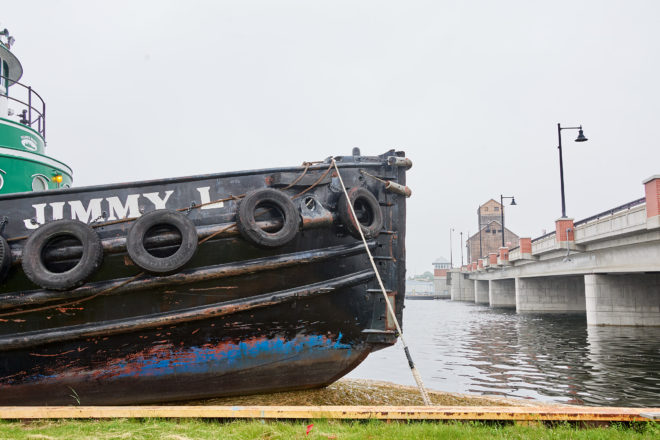 A tugboat was tied along the West Waterfront breakwall while the granary was moved back across the Oregon Street Bridge last year. Much of the debate about the Waterfront Waterfront Promenade has centered around how to maintain the working tugs while accommodating pedestrian use. Photo by Len Villano.

Granary to remain in original location

The Teweles and Brandeis grain elevator will stay in its original location on Lot 92 of the West Waterfront after the Sturgeon Bay Common Council approved an amended agreement Tuesday with the Sturgeon Bay Historical Society to put the issue to rest.

Though the city has had an agreement in place since early last year, the site had come into question when the Ad Hoc Waterfront Planning Committee presented a plan calling for the structure to move to the foot of the Oregon Street Bridge.

“First, it affirms that the ownership of the structure reverts back to the Sturgeon Bay Historical Society so the city is not responsible for maintenance,” Ward said. “It also raised the minimum standard [for what] the historical society must do.”

The historical society is now responsible for bringing the structure up to a public-assembly standard, with a catering kitchen and restrooms, including restrooms for public use. The city in turn agreed to run sewer and water laterals to the building.

“This saves the city the cost of building public restrooms on the site,” Ward said. The city has received estimates of $60,000 to $100,000 to build basic restrooms. More elaborate public restrooms at waterfront parks in Fish Creek and Sister Bay have cost significantly more than that.

The council voted 5-2 in favor of the amended agreement, with Kirsten Reeths and Gary Nault opposed.

That granary decision came after the council approved a concept plan from Cedar Corporation engineers for the West Waterfront Promenade. That came after lengthy discussions about the details of the plan, primarily concerning the width and design of access paths that would allow vehicles to reach the tugs on the waterfront and the tug John Purves.

The walking paths are designed with widths of 12 feet near the museum and 15 feet elsewhere. Alder Kelly Avenson requested that the city go back to the owners of Sarter Marine Towing, which operates the working tugs along the waterfront, to get clarity on its space and equipment needs. At one point Avenson requested that the council suspend its rules to allow the tug operators, who were in attendance, to answer questions about their needs, but her motion did not receive a second from the council.

Reached after the meeting, Stephen Ross, a tug captain and operations supervisor for Sarter Marine Towing, said the city has been open to the towing company’s concerns. He said Sarter does need some parking accommodation near the tugs to maintain operations.

“I’m hoping we have some more conversations with the city and the engineers so they know what we need down there,” he said.

“Access along the bridge needs to be a minimum of 20 feet wide,” Dietman said.

He also said the paths would need to be rounded to enable trucks to get in and out of the waterfront area with 20 feet of unobstructed view and a minimum tree canopy height of 13 feet, six inches.

City Administrator Josh VanLieshout interrupted proceedings to clarify the process. VanLieshout said that Cedar Corporation would go through a code analysis and coordinate with emergency personnel, tug owners and city staff to make sure the plans adhere to state and city requirements.

“I don’t want the council to get too hung up and try to design this on the floor of the council,” VanLieshout said. “What we do need in order to hit that summer build time is we do need to move forward.”

Mayor David Ward and Alder Gary Nault expressed concern that by widening access roads and paths throughout the property, the city would be adding significant impervious surface area to a lot that is just two and a half acres.

“If we’re adding all of this impervious surface, that’s going to be a big parking lot, isn’t it?” Ward said.

Council members suggested planting trees on the landward side of the waterfront path. For now, that area is being left open to enable vendors to erect tents there during festivals and celebrations.

The council voted 6-1 to approve the plan, instructing Cedar Corporation to return to the council for further plan review when the plan is 30 percent complete.