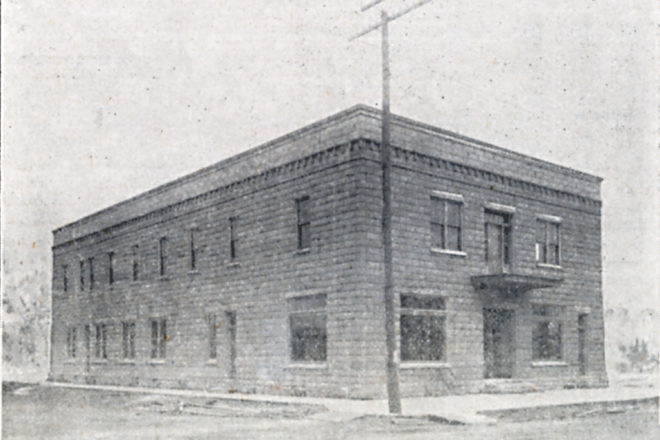 The Butch’s Bar building when it was constructed in 1904 as a hotel at the corner of 3rd Avenue and Nebraska Street. The corner’s previous occupant, also a hotel, also burned to the ground with a loss of life. Photo courtesy of the Door County Historical Museum.

The building before Butch’s Bar, located at the same corner, was also destroyed by fire with a loss of life

In the wake of the Feb. 22 fire that destroyed Butch’s Bar, there was a loss of life and livelihood, housing for those down on their luck and a place for musicians of all levels to try out material on a willing audience.

Add to that the loss of the history that has anchored the corner of 3rd Avenue and Nebraska Street for as long as anyone now living can remember.

“The loss of any building from that era is a loss to the town, a loss of part of the historic character that makes Sturgeon Bay so special,” said Steven Rice, manager of the Door County Historical Museum and Door County Archives.

The building was indeed historical, dating to 1904. But there was more to the location’s history than the past 118 years. There was actually another hotel on the site that was also destroyed by fire, with a loss of life. The Heilmann Hotel – the first brick hotel in Door County – was built in 1881. In 1895, with a change in management, the name was changed to the Tremont Hotel.

A July 29, 1895, item in the Door County Advocate reported that “Sheriff Washburn was requesting reconsideration of the bill he presented for dinner for 53 jurors at the Hotel Tremont at 35 cents each.” The problem was that the hotel had previously fed jurors for 25 cents.

On Sept. 7, 1895, the Door County Democrat noted that “Johnson and Heilmann, proprietors of the Hotel Tremont, have recently had electric lights placed throughout the building, adding greatly to the attractiveness of the hotel.”

On Sept. 8, 1900, the Advocate noted that “Mr. French paid $5,000 for the Tremont Hotel property.” He rechristened it – very briefly – as the Hotel French before it burned down in November of that year. The Door County News reported that a young woman from Algoma lost her life in the fire while trying to save her belongings. Joseph Richmond was the manager at the time, having leased the business in August “for at least a year.”

Abner Calhoun of the Carmody District in Egg Harbor was first mentioned in local newspapers in January 1896, when it was reported (tongue in cheek) by the Door County Democrat that he had been contracted to move the northern portion of Jacksonport to Baileys Harbor – it would take 23 friends with 26 teams to get 70 cords of lumber out of those Jacksonport woods.

Calhoun’s next business venture was the purchase of the old Tremont/French Hotel site in the spring of 1904. He reported to the Door County Democrat that he was securing material for the construction of a two-story, solid-brick hotel and was pushing for an early completion. However, by April 4, the Advocate reported that Calhoun had sold the uncompleted project to Fred S. Hanson for $12,000.

“Mr. Calhoun will complete the building which is ready for the plastering,” the article reported, but by 1913, the hotel closed because of financial problems.

On Feb. 20, 1914, the Door County Democrat reported that John O. Pujols, head chef for prominent hotels in Milwaukee, was negotiating to purchase the hotel, along with the adjoining lot and all new furnishings for $81,000. He planned to add a third story with 16 additional rooms, each with running water and each two connected by a bath. He proposed charging $13 a day for a room with meals and $3.50 for a room with a bath. He was asking the Commercial Club to provide $81,600 in financing for the project.

This venture apparently came to nothing because in November 1915, Mrs. T.H. Smith, the new owner of the Goodrich Hotel, was having extensive repairs and redecorating done because the building had been vacant for several years. By June 1916, the Democrat reported that the hotel was closing and that “Mrs. Elmer Carlson and Mrs. Bernard Lundgren, who have been conducting the hotel the last six or seven months, will vacate the place on June 15, returning to their former home at Phillips, where their respective husbands are engaged in the contracting business.” Interestingly, an earlier item had noted that Mrs. Lundgren was the former Mrs. Abner Calhoun.

Apparently, the building was empty until February of 1917, when the Democrat noted that “it would be a difficult matter to find a finer club building in the state than the elegant new quarters of the $10,000 home of the Twenty Club in the former Goodrich Hotel.”

The Twenty Club, described by Rice as “part of the ‘golden age’ of men’s social clubs,” had been formed a few years earlier by 20 prominent young men in Sturgeon Bay to host banquets and balls, participate in bowling and softball leagues, and carry on benevolent activities that included an annual Christmas tree for parents who could not afford to purchase gifts for their children.

By 1924, the building had been sold to Fred Hanson, the former postmaster in Egg Harbor, but the club continued to meet in the building and, beginning in January 1926, merged with the American Legion Post “to aid considerably in keeping up with expenses.”

The building was renovated again when the Eagles took ownership in 1931. They operated it for nearly three decades until Joseph Richmond leased the property in July 1959.

On Jan. 1, 1966, the Advocate reported that Cling Karnitz, the longtime owner of Cling’s Tavern in Sawyer, had purchased the property at Cedar and Pine as the home of his new Cling’s Bar.

Clarence Cumber bought the property in the early 1970s and ran Butch’s Bar for nearly a half century with his son, Dave, until it ended in flames Feb. 22.

That corner had been a gathering place for 141 years. As part of Sturgeon Bay’s historic district, the building was on the Wisconsin and National Registers of Historic Places. The loss of one of the town’s oldest buildings was, as Rice said, “a loss to the iconic memory of generations of people.”