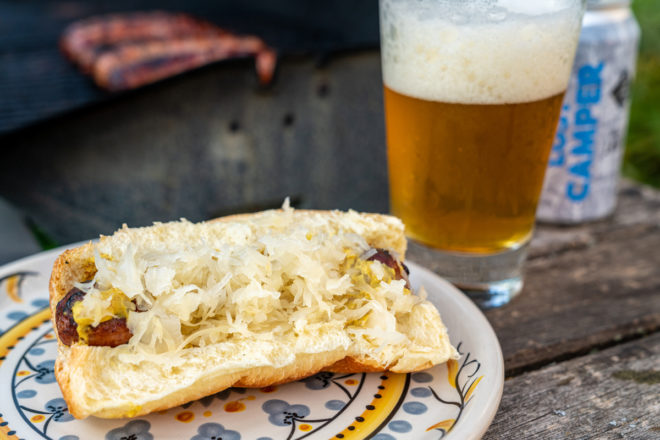 Now that it’s August, I hope you’ve had plenty of chances to get some grilling practice because now we’re going to talk about creating the perfect beer-and-grilling combinations.

This is a fun, tasty and very easy recipe that involves shoving an open beer can in a chicken and cooking it on a grill until it’s ready to go.

There are lots of recipes out there that involve a few basic, easy steps. I could go into detail about these steps and spices, but I’d rather talk about the beer. The purpose of the beer can is to add flavor and moisture from the inside out while roasting. The outside is getting pelted with heat and smoke, but the beer inside is there to keep the meat from drying out and add some nice flavor.

For the beer inside the chicken, I wouldn’t obsess about which is the perfect brew because cooking with beer using this method doesn’t require the perfect balance of flavors in the way that many other recipes do. If you are feeling a little fancy, however, choose a beer with a nice malty backbone, but not too heavy. A little malt and breadiness in beer could help to enhance the caramelization flavors while cooking.

As for the beer you’re drinking with the chicken, I would give that choice far more thought. Because the chicken is barbecuing through indirect heat, there will be a good amount of smoke exposure, which will likely form a bit of a roasty crust on the skin. Considering this, you could pair your chicken with a German rauchbier – or smoked beer – but you may not want to accentuate the smokiness.

Instead, I would recommend an amber or brown ale without too much intensity but with a nice, caramelly backbone. Locally, the Polka King Porter from Door County Brewing Company comes to mind, but an Alaskan amber or Eliot Ness from Great Lakes Brewing would do the trick.

As a Wisconsin favorite – and a personal favorite – beer brats are a must at any serious cookout.

Amazingly, (non-meat) Beyond Brats work really well as beer brats, too! Just make sure not to soak them for too long. Half an hour in the crock pot on high heat has worked well for me.

The only way to make a great beer brat – in my humble opinion – is to cook them in 100 percent beer for a decent amount of time before grilling. The beer here isn’t as important either, but I prefer a light macro lager with a little sweetness. I usually default to PBR or Hamm’s because of that extra breadiness and sweetness. I’d advise staying away from light beer and flavorless macro lagers such as Coors. (Coors Banquet maybe … but at your own risk.)

And the beer bath isn’t just for the brats. Make sure you’ve got plenty of onions and kraut soaking up those flavors as well. Your burger and chicken friends might want to add some to their dish, too!

For your beer to pair with your brat, consider your toppings. If you’re keeping it simple, remember to follow this important rule of pairing: “What grows together goes together.” By this I mean, consider the heritage of the bratwurst: A German food should pair with a German beer! (And no, Schlitz and Budweiser do not count.)

Choose brews that are more bready, caramelly and substantial – a helles lager such as Lost Camper from Door County Brewing Company on the lighter end, or an Oktoberfest variant for more flavor. These include Märzens, festbiers and Oktoberfest styles. The key is this: more toppings, more flavor.

I haven’t found a way to cook burgers with beer yet, so it’s lucky that burgers and beer are already a classic American pairing. Here we have another example of “What grows together goes together” in burgers and American IPAs: American hops have a ton of flavor, which makes them great for burger pairing.

One of my favorites is the Daisy Cutter from Half Acre. This beer is light, but it has a surprisingly strong bitterness and good carbonation to cut the fattiness and crazy favors on your burger. The Hooey IPA from Lupulin Brewing – a little stronger – is sure to stand up to your burger with both malts and hop flavors. If you’re going with something more simple, a lighter pale ale or even an American amber will bring out nice, caramelly flavors.