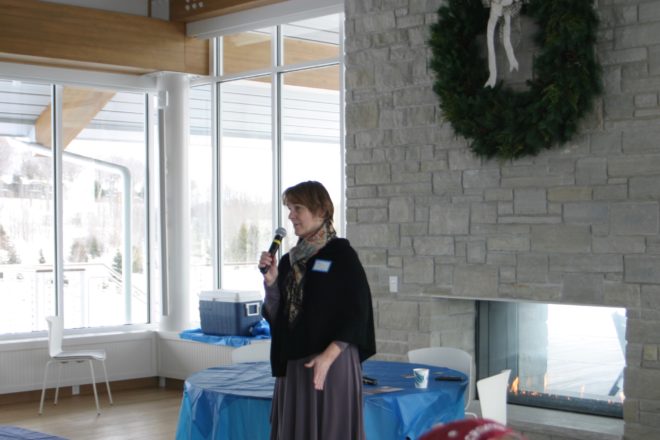 Lisa Neubauer, chief judge of the Wisconsin Court of Appeals, pointed out as the guest speaker at the Democratic Party of Door County’s annual pie-party fundraiser – held Feb. 17 at the Kress Pavilion in Egg Harbor – dark, unaccountable outside campaign money for judicial races has been “a cancer on our state” for a decade.

Neubauer served as a litigation attorney for nearly two decades before being named by then-Gov. Jim Doyle to the state’s appellate court at the end of 2007. She was named by the Wisconsin Supreme Court as chief appellate judge in 2015 and reappointed to that post in 2018, and earned the support of more than 300 fellow judges and wide bipartisan support from district attorneys and sheriffs throughout the state.

She faces Judge Brian Hagedorn, who, after serving as former Gov. Scott Walker’s legal counsel, was appointed to a six-year term on the court of appeals by Walker in 2017.

She described Hagedorn as “very ideologically driven” and said he had barely practiced law before becoming Walker’s legal counsel. Recent news stories have uncovered homophobic blog posts Hagedorn wrote in 2005 and 2006 while attending law school at Northwestern University (while Neubauer was in her second decade of law practice). More recently it was revealed that Hagedorn helped to found and serves on the board of the Augustine Academy, a private school that prohibits employees, board members, parents and students from “immoral sexual activity,” which is defined as anything “apart from the context of marriage between one man and one woman.” Hagedorn, 41, has said his partisan views won’t affect his rulings.

“I thought, this is not the right direction for our state. It is not the right direction for our court,” Neubauer told the audience at the Kress. “I’m really honored, really honored, to have the support of more than 325 judges from around the state, including Judge Ehlers, who has joined us here today. Judges Diltz and Hawley from Door County are also on board….And that is kind of the picture in every county I’ve been to, 62 counties, with very broad, bipartisan support with sheriffs, DAs, over 70 sheriffs, DAs and former DAs.”

While she said these endorsements acknowledge her experience and qualifications, it is also the judiciary “shouting that we have to get the dark, unaccountable money out of our judicial races.”

Last August, former Chief Justice Shirley Abrahamson – the first woman to serve on the state’s highest court when she was appointed in 1976 by then-Gov. Patrick Lucey – announced that she had cancer and would not seek another term.

“I had a lot of people reach out to me and say, ‘Lisa, you have to run,’” Neubauer said.

Neubauer said her parents had instilled in her a sense of service and giving back to the community. She earned her undergraduate degree in political science from UW-Madison and graduated at the top of her law school class at the University of Chicago, after which she served as a clerk for Judge Barbara Crabb of the United States District Court for the Western District of Wisconsin.

Neubauer then spent 19 years with a Milwaukee law firm before applying for an opening on the court of appeals in 2007, to which she was appointed by Gov. Doyle.

She had to run a campaign for the job in 2008 and was advised by the late William Bablitch, who served in the state Senate before being elected to the Wisconsin Supreme Court in 1983, that to run a nonpartisan campaign, she had to visit judges and law-enforcement officials across the state to garner their support. After winning 63 percent of the vote against attorney William Gleisner in that race, she saw the effectiveness of making herself known among her colleagues throughout the state.

Neubauer said having the endorsements of 325 judges is unprecedented, but reflects the overriding concern of the judiciary in Wisconsin, “which is we have to have the third branch be the impartial, independent, fair branch that is there for the people and not for the outside money that is coming in and spending literally millions and millions of dollars in our Supreme Court race.”

She also targeted the Wisconsin Manufacturers & Commerce (WMC) organization (which calls itself the state chamber of commerce, state manufacturers’ association and state safety council), which last August came out in support of Hagedorn for being “an ardent supporter of the rule of law.”

“The entire judiciary is saying hands off, stop, enough!” she said. “I’m hoping that message will get out there in a strong way.”

For the integrity of the judicial system, Neubauer said judges should be elected on qualifications and merit, and compared herself to Judge Rebecca Dallet, who defeated Michael Screnock for a seat on the state Supreme Court last year.

“She was far more experienced than her opponent,” Neubauer said. “Same is true for me.”

Neubauer also offered a note on a solid connection she has to Door County.

“My great-grandmother started Camp Meenahga at Peninsula State Park,” she said. “She was a single mom, school cafeteria cook. She and a friend started that camp to get girls away from the trappings of fashion and boys, and my mom spent every summer up here. It was a huge part of who my mom was: love of outdoors, environment and not defining oneself based on fashion and boys.”

Workforce Development Secretary-designee Caleb Frostman also appeared at the event and talked about the whirlwind first six weeks of being a part of Gov. Tony Evers’ administration.

He added that he is excited to be part of a team that will fight for Wisconsin values and promised to work at the cabinet level to make sure the economy works for everyone.