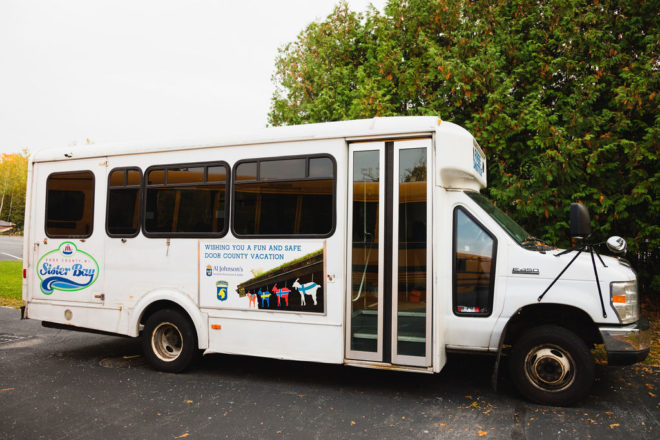 Sister Bay’s shuttle bus has transported thousands of passengers since it began in 2019 but the bus has about 161,000 miles and suffers ongoing mechanical problems. The village and Peninsula Transit Coalition will purchase a new bus this year with federal grant funding. The free Sister Bay shuttle-bus service runs every 30 minutes, Thursday-Saturday, 5 pm – 2 am, June-August, with special weekends after Labor Day, such as Pumpkin Patch Festival and Fall Fest in October, and Christkindlmarkt and New Year’s Eve in December.

It’s often easy to identify needs, but harder to come by solutions. This is especially true with complex issues such as transportation start-ups that require capital outlay, ongoing operational funds and someone to oversee the operation without that oversight being an official part of anyone’s job.

Those hurdles didn’t stop a small group of people in northern Door County from forming the Peninsula Transit Coalition (PTC). They began meeting in early 2018 to study options for a bus system that would operate in addition to existing transportation options. By 2019, the PTC – Pam Busch, Myles Dannhausen Jr., Dave Eliot, Steve Grutzmacher, Mike Holmes, Louise Howson, Miluzka McCarthy, Sophie Parr, Nikki Voight and Kathy Wagner – had acquired a used bus and were operating a fixed route system that would safely transport thousands of people, primarily visitors, during the first season of operation in 2019.

“Nobody thought we would get one [a bus], but we did,” said Louise Howson, community coordinator of the Sister Bay Advancement Association (SBAA).

The wheelchair-accessible, fare-free ride can transport 14 passengers at once. It works through a partnership between the Village of Sister Bay and the SBAA: The village owns the vehicle and pays all of the costs associated with its operation and maintenance, including gasoline, insurance and the employment of drivers. The village’s 2021 operating budget for the bus was $21,000.

The SBAA manages all operations, including hiring a reliable driver and soliciting funding to offset the village’s costs.

“Our obligation is to operate it officially and meet our obligations relative to sponsorship to break even,” Howson said. “So we put advertising on the outside of the bus, and local businesses support it, and the ride is free.”

The bus transported 5,700 people from July through October in 2019. The busiest weekend was for Sister Bay’s Fall Fest, when it carried 1,250 people. The Saturday of that weekend, Baileys Harbor also rented a bus that carried 800 festivalgoers.

COVID-19 stopped the shuttle – along with pretty much everything else – in 2020. Back up and running in 2021, the bus was dogged by mechanical issues, so the service did not live up to its full potential, transporting only 3,700 people last year. The keys to making it easier to manage are a reliable driver and a reliable bus.

“We have a reliable driver, but not the bus,” Howson said. “My word to the wise is, do not buy a used bus.”

Sister Bay had purchased its bus for $8,000 and put about that much into it to get it ready. The bus now has about 161,000 miles on it. Recognizing it would need a better bus, the PTC hired local resident Sophie Parr, who had worked as a transit planner for the City of Duluth after graduate school and started a community planning organization, Civic 4. Parr landed a grant, so the PTC/Village were awarded $45,520 in federal funding from the 2022-26 Congestion Mitigation & Air Quality (CMAQ) program.

The PTC will use the funding to buy a new, more energy-efficient bus.

The village will finance the entire project upfront, with the federal award reimbursing up to 80% of the estimated cost of $70,000-$80,000. Howson said they’ll keep their current shuttle in good working order in case they need it as a backup on high-traffic days.

CMAQ is a federal reimbursement program administered by the Wisconsin Department of Transportation that assists local agencies with projects that improve air quality and reduce congestion through bicycle and pedestrian options, traffic flow, diesel retrofits and public-transit projects. That the PTC/Village of Sister Bay received funding is a pretty big deal because only 14 projects were awarded approximately $24.4 million of approved federal CMAQ funding this cycle.

“And most of those [CMAQ grants] go to the big polluters,” Howson said, “but we’re taking people off the roads with public transportation.”

And that’s the beauty of the bus. Although the primary goal is to provide accessible, affordable, safe transportation to and from destinations for visitors, it’s automatically reducing emissions that pollute the air and the planet.

And the possibilities extend beyond transporting visitors. The bus could shuttle J1-visa employees and others to and from work, resolving the transportation need of seasonal workers while also saving them money. Parr calculated that if 20 individuals traveled to Sister Bay from Fish Creek and back every day for 90 days during the summer, using the conservative estimate of $7.13 per work trip, the cost savings for employees using the system would be $25,668.

This example came from the transit study that Parr did for the PTC prior to writing the grant application. Her detailed analysis included fixed-route proposals, schedules and cost estimates for six northern Door communities.

Parr also recommended two transportation options that could serve all of Northern Door. The first was a two-directional circulator system, in which buses would travel in opposite directions following a circular path. The communities served would be Ellison Bay, Sister Bay, Ephraim, Fish Creek, Egg Harbor and Baileys Harbor. With a headway, or wait time, of 30 minutes, seven vehicles would be needed at a start-up cost of $331,338.

The second option outlined a Northern Door system that would operate consistently along Highway 42 with 30-minute headways, while simultaneously running two connector buses with 60-minute headways. The connectors would run from Sister Bay to Baileys Harbor, and Egg Harbor to Baileys Harbor. Riders would need to connect in either Egg Harbor or Sister Bay to access the Highway 42 bus. That option required  four vehicles and start-up costs of $288,810.

“There weren’t a lot of ideas that were executable in the immediate future,” Parr said. “It would take millions of dollars if we want a fixed system.”

That there’s a cost to all of this is no surprise. But there’s a greater cost of doing nothing, according to those who work in the transportation sector, and that includes increased parking issues and traffic congestion, deteriorating roads and other infrastructure, a diminishing pool of employees, lives devastated by DUIs, and diminished air quality and visitor experiences.

So it has to start somewhere. Sister Bay is the only municipality in Door County to run a shuttle service, but that’s not the future the PTC envisions. Last year, Howson visited each of the Northern Door communities to share the story about how to start a fixed public transportation system and why it’s needed. None of the other communities has committed yet, but the more that do, the more they’ll be able to work together to better serve the region.

“I will say what I told Louise [Howson], is what she’s doing in Sister Bay is the start of what it will grow to,” Parr said. “It has to start with a seed, and I hope it keeps growing. I think it will. Sister Bay is doing a great thing.”