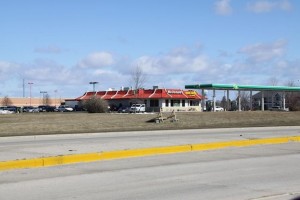 A few trees could spruce up the suburban look of the McDonald’s/ Target development on Sturgeon Bay’s West Side without taking away from visibility.

On a recent drive back to Door County from Madison, I was relieved to get out of the shopping centers and franchise restaurants on the east side of the city and into some open farmland along Highway 151. But it did seem that every 20 miles or so I hit a cluster of stores, McDonald’s and gas station-convenience stores, all lit by tall, high-intensity lights around highway interchanges.

It’s going to feel good to get back to Door County, I thought.

After taking Highway 41 through Oshkosh and Appleton, I was really ready for some dark skies and tranquility. Coming past Fleet Farm and a huge car lot or two on the north end of Green Bay I was getting positively antsy by the time I turned onto Highway 57.

Then I hit the BP station south of Sturgeon Bay. Followed by an RV sales lot, and truck and dumpster rentals. It felt like déja vu all over again. Was this really scenic Door County? 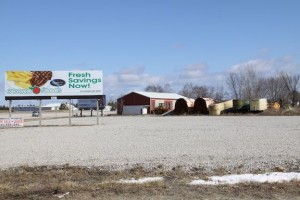 One of the Door County economic development reports I read a few years ago said Door County needs to dress up its entry points. Next time you drive up from Green Bay, try to think like a visitor from Chicago, nearing the end of a five hour drive with traffic tie-ups in Chicago and Milwaukee, eager to experience the county’s famed beauty. Then you hit five miles of standard highway commercial development on the way into Sturgeon Bay. Can you hear the kids asking “Are we there yet?”

Highway 42 isn’t exactly scenic, but it lacks the big commercial establishments on 57.

It’s probably a little late to suggest every commercial business along the highway try to look like Al Johnson’s Swedish restaurant, and besides, the county probably doesn’t have enough goats to populate the roofs. But why not plant some evergreens on the west side of the highway, where they won’t block the winter sun from melting the snow and ice, and some attractive ornamental cherry trees, oaks and maples on both sides to provide color in spring and fall?

Individuals and civic organizations could donate and plant trees in stretches where no one else was willing to step up; and perhaps the county highway department could send a water truck by occasionally to spray them with water and get them rooted. 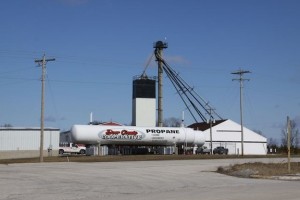 With a little imagination, plantings could advertise a business. Think Havegard with bird feeders hanging from several small trees, or Lampert’s with a miniature tree house or two lodged in some new trees. (In 10 years time they could replace the miniature versions with real kid-size tree houses.) The vacant land just south of the Target-McDonald’s-BP complex could use some trees, which would still let the Target sign show through to the highway while breaking up the views a bit. Car dealers have big hulking pickup trucks – surely someone could design a bit of wilderness with a small hill, rocks, and bushes or trees to create an eye-catching display of a muscle truck. Walgreens could easily benefit from a dozen trees along its edges – no way that store is going to disappear into the landscape anytime soon. The turnoff to Business 42-57 could use some attention as well – the daffodils in the spring are great, but how about a few more bushes and trees to dress up the entrance to the city? Tourism is a big business for the county, after all.

Companies pay a lot for highway frontage, in land purchase price and taxes, so the aim shouldn’t be to conceal them behind a dense screen of cedars or hemlocks, but to break up the industrial appearance with an arrangement of evergreen and deciduous trees, perhaps some flowering shrubs as well.

The effort could continue to the highway bridge, and along Egg Harbor Road where the Palmer Johnson facility in the old Pamida building could benefit from some sprucing up. Some individual businesses have well-designed landscaping, but the overall view, especially going past the empty Taco Bell and the former Chinese buffet buildings, is pretty dreary.

Visitors from Chicago, Milwaukee and Green Bay don’t come to the Door County for strip malls, car lots and brightly lit drug stores. Why should they have to wait to get past the Highway 42-57 split to see the county they expect to enjoy?

Sturgeon Bay is never going to be Fish Creek – probably a good thing for both of them. Trying to horn a city of 10,000 into a cutesy bunch of clapboard buildings just isn’t going to work, and anyone who thinks Wal-Mart, Target, Pick ‘N Save, Econo Food and Papa Murphy’s – to mention just a few – never draw residents from north of the Egg Harbor -Baileys Harbor line is just naive, or in denial.

As Myles Dannhausen Jr. wrote on the topic in an article titled “Sprucing Up Our Doorstep” in 2008:

“Each spring, enlist a willing local landscaper to tour each village, offering suggestions to business owners for easy ways to spruce up their doorstep. Send them out armed with a trailer full of plants, bushes, and flowers, so the business owner can buy right off the truck, saving time and dollars not spent on the wrong greenery. Not every business owner is a horticulturalist, so why not give them a hand, and send some money to our local landscapers and greenhouses? It might be a great way for a landscaper to drum up new business as well.

“And since I’ve gotten this far, I’ll rehash an idea I’ve voiced before – line our highways with cherry trees. How about planting cherry trees in the middle of the four-lane through Sturgeon Bay and even further south? Continue it on up the peninsula, especially in front of some of the less than awe-inspiring architectural additions to the once-rural landscape. Imagine a Blossom Festival that welcomed visitors with miles of cherry blossoms, rather than concrete and bland, mind-numbing, suburban-style infrastructure. If for some reason cherry trees are impractical, lets find another colorful symbol of the Door.”

The economic development study pointed out that Door County competes with plenty of other places that have lovely landscape, trees, sand and water. It’s time to take a more critical look at the county’s appearance and then do something about it.

Do you know other areas of the county that could use a few dozen trees? Send your suggestions to the Pulse or chime in at http://www.ppulse.com.