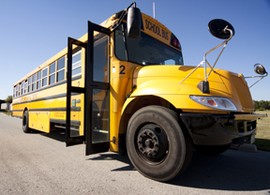 It’s big. It’s yellow, and many people say they learned just as much on it as they did in school. “It” in this scenario is the school bus, with the (hopefully) friendly driver, imitation leather seats and “camera” used to fool children into behaving.

Four of Door County’s five school districts operate in rural communities, making transportation a big part of their budgets. Over the years some districts have considered contracting transportation services. We broke down the different approaches area schools take to get students to and from school and extra-curricular activities, and how those decisions impact their budgets.

Sevastopol Superintendent Steve Cromell said that Door County school districts looked into hiring a bus service before he started in the district five years ago, but he said the investigation was preliminary.

Switching to a bus service “requires a lot of preemptive footwork,” Cromell said, such as ensuring fair treatment of employees and analyzing current costs with projected bus service costs, among other variables.

While his district isn’t in a position to make a decision about switching to a bus service, Cromell said tough economic times could push the district to consider the possibility.

“As we’re trying to be more accountable and fiscally responsible you have to look at it,” Cromell said.

Sevastopol paid $345,000 in transportation costs during the 2010-2011 school year and is budgeting the same for this year. That figure includes costs for daily bus routes as well as for extra-curricular activities.

The Sevastopol School District covers 100 square miles, and while many high school students drive to school each day, Cromell estimated that 70 to 80 percent of the students ride the bus. That’s about 400 students. The school has nine regular bus routes and 11 busses. 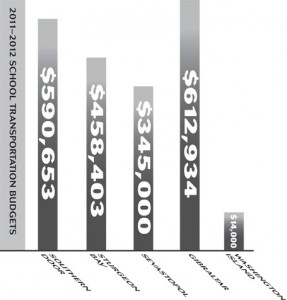 Southern Door is also a large district area-wise, and the cost of one new bus for 2011-12 is included in its budget.

In addition to a late bus that transports students home from after school practices, Gibraltar busses travel significantly farther over the course of the year to transport students to extra-curricular activities off of the peninsula.

A noon bus route was eliminated to reduce costs, so four-year-old kindergarteners and regular kindergarteners go to school for a full day two days per week and every other Friday, rather than everyday for half the day. The district has never employed a late bus to bring home students who participate in after school activities, Cromell added.

Sturgeon Bay School District took a serious look at contracting with a private bus service in 2004. The district went to arbitration with its bus drivers’ union to obtain new contract language that would allow it to subcontract its transportation services, a move it contended would save the district $243,000 in annual operating costs and generate $120,000 by selling its bus fleet.

But arbitrator Amedeo Greco ruled that the estimate provided by Kobussen Bus Service of $389,000 per year wasn’t reliable long term. It would have allowed Kobussen to raise its fee 4 percent per year and gave it wiggle room to cut back service if costs increased.

According to arbitration documents, Kobussen was the only service even willing to submit a bid to Sturgeon Bay. The state’s largest bus service, Laidlaw, said the geographic isolation of Sturgeon Bay, the county’s only urban district, made providing transportation cost prohibitive.

Greco determined that if Kobussen would have come to a similar conclusion after its initial contract expired, Sturgeon Bay School District would have been left without a bus fleet and stuck at the mercy of whatever a bus company was willing to do the job for. In the end, Greco ruled in favor of Sturgeon Bay continuing its contract with the bus drivers’ union.

The district operates and maintains 17 busses, with 13 in use each day, said John Sullivan of the Maintenance and Bussing Department.

The district runs what’s known as a double-route or split-route, picking up grades K-5 with six busses and grades 6-12 with another six busses. It also runs a midday route for four-year-old kindergarteners, Sullivan said.

Unlike its neighbor to the north, Southern Door School District hasn’t considered hiring a bus service, according to Superintendent Joe Innis. 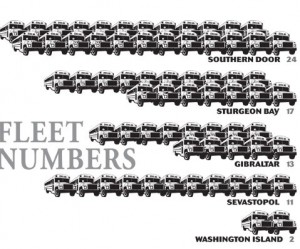 “The district owns its own busses, and we’ve been satisfied overall with how that has done up to this point,” Innis said.

But with a major deficit looming over its head, Southern Door, like Sevastopol, may have to consider a change.

“I think the district is going to have to look at all options of potential savings in the future, which may include bussing,” Innis said.

Southern Door has budgeted $590,653 for transportation this academic year, a figure that jumped because it purchased a new bus. The district sends 16 busses out each day to transport 990 students to and from school, and when combined with extra-curricular transportation, the busses covered 255,829 miles in 2010-2011.

Gibraltar Schools Superintendent Steve Seyfer said the district explored the possibility of hiring a bus service several years ago but did not because of an existing union contract limitation.

“The Board and Local 1658 of the AFSCME/AFL-CIO have a contract that prohibits subcontracting for student transportation except in very rare conditions,” Seyfer wrote in an email to the Peninsula Pulse.

Total transportation costs budgeted for Gibraltar this academic year amount to $612,934, but the district did receive categorical state aid for transportation totaling $63,000 for 2011-2012, Seyfer said.

Contracting bus services isn’t an option for isolated Washington Island School District. The district has two busses but uses only one for its daily route, with transportation costs of $14,000 budgeted for 2011-2012. The district doesn’t have a midday route or late bus for the 20 to 25 students that ride the bus each day, which amounts to roughly a third of the district’s students.