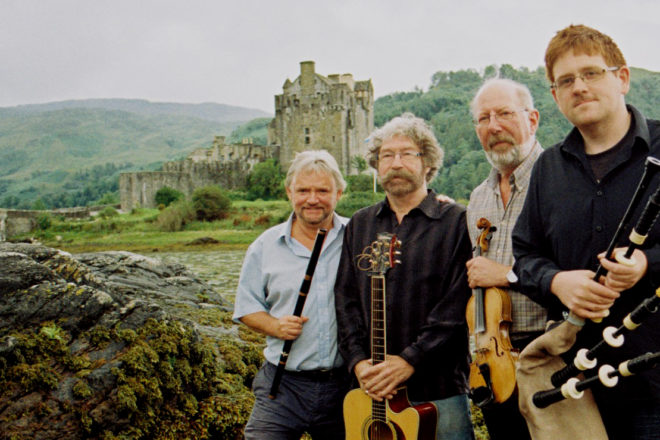 The Tannahill Weavers, one of Scotland’s premier traditional bands, will present a concert at the Trueblood Performing Arts Center on Washington Island on Saturday evening, May 13.

The group, described by the New York Times as “an especially eloquent mixture of the old and the new,” was named for poet laureate Robert Tannahill (1774-1810), a Scotsman of laboring-class origins who was known as the weaver poet because of the trade he learned from his father.

The “Tannies” was founded in 1968 and first toured in the U.S. in 1981. Original members Roy Gullane (vocals, guitar) and Phil Smille (flute, tin whistles, bodhran, vocals) have been joined by John Martin (fiddle, vocals) and Lorne MacDougall (highland bagpipes, Scottish small pipes, tin whistles). The Winnipeg Free Press noted, “The Tannahill Weavers – properly harnessed – could probably power an entire city for a year on the strength of last night’s concert alone. The music may be old time Celtic, but the drive and enthusiasm are akin to straight ahead rock and roll.” They recently released their 17th album, Live and In Session. In 2011, the band was inducted into the Scottish Traditional Music Hall of Fame.

Gullane is the band’s lead vocalist. He has written many songs in the traditional Scottish style that have been recorded by the group and many more that are on his solo recording, Not Only But Also.

After all his years of touring with the Tannahill Weavers, Phil Smille recently recorded his first CD, using his D, E-flat and F flutes and his A, D and E-flat whistles. “In many ways,” he said, “this album has turned out to be a gathering of many friends whom I’ve had the great pleasure of sharing a stage with over the years.”

Martin, one of Scotland’s finest fiddle players, started winning fiddle competitions and made his first radio broadcast for the BBC at the age of 14.

In 2014 the band welcomed their newest member, MacDougall. He comes with a high pedigree, having arranged and performed pipes for the DreamWorks movie, How to Train Your Dragon 2, along with a long list of other accomplishments, including placing three times in the BBC Radio Scotland Young Traditional Musician of the Year Final. He has an honors degree in Scottish Music, specializing in bagpipes.

Go to tannahillweavers.com/music/Geese_in_the_Bog.mp3 for a sample of the Tannahill Weavers’ music.