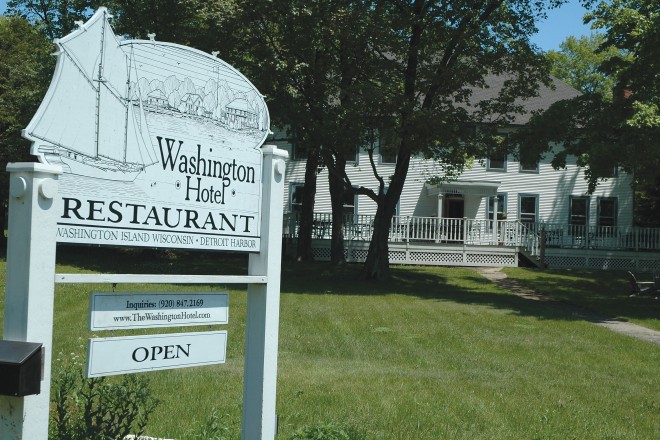 A ship’s captain could take comfort while guiding his vessel through Death’s Door, knowing a nourishing meal and a peaceful night’s sleep awaited him on Washington Island. The Washington Hotel and its kitchen, established by seafarer Captain Ben Johnson in 1904, existed to provide those at helm with reprieve from the ship’s hold.

A century later, Captain Johnson’s original hospitality is rekindled by owner Brian Vandewalle and Chef-Proprietor Leah Caplan, along with the promise of a flavorful meal, restful sleep and a retreat from life’s daily challenges. Also revived is an historic principle, perhaps taken for granted by those living on the island 100 years ago: local sustainability.

Caplan and Vandewalle re-established The Washington Hotel Restaurant & Culinary School in 2001, united by an unconventional mission. As stated by Chef Caplan, that mission is ?to restore the agricultural economy of the island.? Commitment to this objective is apparent in every decision they made while enhancing the location and its offerings. Local, sustainable and/or organic products are used whenever possible, in both the menu and the décor.

A graduate of the prestigious Culinary Institute of America (CIA) and a leading expert in the regional food movement, Chef Caplan has dedicated her career to offering indigenous foods. “I wanted to be closer to real food and real people,” she explains. Not only healthier and more flavorful for those enjoying the meal, this practice is also healthier for the local economy supported by it. Says Caplan, “It is nice to know that when we need eggs, we call the farmer down the road to order.”

Chef Caplan’s menu selections are seasonal and organic, with a constant eye for quality. Beef is purchased from neighboring Washington Island farmers. Mozzarella cheese and house-made ice creams are prepared on site, using fresh Wisconsin dairy. Whitefish caught by local fishermen is featured in such favorites as smoked whitefish pizza. For selections including grilled asparagus and wild leek frittata salad the naturally-growing asparagus and wild leek have been picked fresh from the surrounding acreage. Local beers and fine wines are available to complement each meal.

A selection of à la carte specialties from the “Brick Oven Menu” are served for lunch or dinner in the parlor or on the garden patio. In The Washington Hotel Restaurant, a prix fixe menu is offered from which guests are treated to such delicacies as whitefish caviar and new potatoes with buttermilk sauce, and organic beef tenderloin with horseradish crust, polenta and sautéed arugula. Entrées delight diners as they experience familiar flavors prepared in an innovative way. ?Many people grow up eating whitefish consistently prepared using the same methods, Caplan explains. “When given the opportunity to sample whitefish in a delicate saffron sauce, for example, their eyes light up experiencing how good it can be.”

The mouth of an impressive six-ton brick oven, namesake to the à la carte menu, opens to the active kitchen. Chef Caplan heard of the oven’s availability during the site renovation and felt confident it would be a fit. Purchased from a bakery in Southern Door, the oven had to be ferried to the island before the Lake Michigan waters began to freeze. “This was before Washington Island had the new winter ferry,” explained Caplan, “and the old one was not able to transport the weight.” Once on the island, simply trucking the oven into place was not an option either; a local islander’s crane was needed to gradually ease the massive structure into place along the historic hearth at its new home.

The result has been well worth the required effort and coordination, as the brick oven is now centerpiece to the restaurant’s offerings and unique character. One of few commercial brick ovens in the state, it is integral in the production of the restaurant’s scrumptious breads and trademark pizzas, all crafted from island-grown wheat. Along with the owners’ commitment to regional sustainability, the uniqueness of preparing foods in the brick oven was a draw for several accomplished bakers. Three additional CIA graduates have joined Chef Caplan in preparing dining selections.

For those with an interest in crafting their own regional delights, Caplan and her colleagues offer classes through the on-site culinary school. Courses are focused on the use of local and seasonal products in everyday cooking. Offerings include The Art of Bread Making and Handmade Pasta and Gnocchi as well as cheese-tasting and wine-tasting seminars. Participants of all ages are welcome for courses in Doughnut Making and Real Ice Cream.

Classes are hosted in a specially designed training/special-event facility, and range in size from two to three people to groups of 20 depending upon topic and format. Private instruction can be arranged year round for students seeking a particular skill or hoping to expand their horizons in the kitchen. For example, Caplan recently assisted a local hunter in uncovering creative methods for preparing wild game. There is also a special course for chefs and restaurateurs entitled “Local and Sustainable Food Purchasing Seminar” scheduled midweek upon request. Sharing the philosophy that guides The Washington Hotel Restaurant business, this seminar covers topics such as flexible menu planning, food costs, total utilization, sourcing product and custom growing.

Diners and culinary school students often extend their stay on the island at The Washington Hotel, located above the restaurant and parlor on the second floor of the property’s main building. This space underwent numerous remodels over the past century, but Caplan and Vandewalle chose to revive the original floor plan. “With the carpeting removed and the wood floors exposed, we could see where the walls had once been,” said Caplan. “We simply followed that pattern during our restoration.”

The serene setting recalls the past while providing for life’s modern comforts. Guests are greeted by a tray of green-hued water glasses, formed from re-claimed wine bottles. Antique light fixtures grace the hallway. Warm colors and gentle décor evoke a feeling of calm. Wood floors are softened with naturally-dyed rugs hand-woven by a Washington Island artist. Original sinks still adorn the walls, but have been updated with modern plumbing. Shared baths reflect Captain Johnson’s original design, but with the addition of indulgent steam showers to pamper today’s guests. In the eight sleeping rooms, beds constructed of island timber are dressed in luxuriously soft bed linens of 100 percent organic cotton. On the walls, framed pictures depict the location’s former life.

Guests are encouraged to “make themselves at home,” by building a fire in the parlor to take the nip out of the evening air. Meanwhile in the restaurant kitchen, bakers prepare for the day ahead by building a fire in the brick oven. The brick oven fire will burn through the night, to heat the thick, surrounding stone. In the morning, smoldering ashes are brushed into the trap. The warmed stone radiates heat at a steady temperature, providing the perfect baking environment throughout the following day.

Functioning in this way, the brick oven that is the restaurant’s trademark is also a fitting metaphor for the business itself. With some effort, a baker lights the fire and the energy and warmth generated is absorbed by its surroundings. This energy is later returned in the form of constant heat by which the baker prepares her food. Likewise, through their support of local farmers, fisherman and artists, owners of The Washington Hotel Restaurant & Culinary School are creating an environment that promises to sustain and nourish their efforts for years to come.