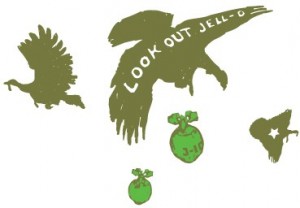 Thanksgiving brought out the performance art in our mother. As if the holiday was set aside to prove the ability of the farmhouse to provide and sustain, akin to that bumper sticker “Farmers Feed the World.” Our mother took this as a personal challenge, to prove the American farm both patriotic and outpouring.

As farmkids we hated Thanksgiving for the overburden of kinsmen that descended on the farm like a biblical plague. Holy Jesus, we were related to a lot of people, at least who professed relation in order to gain a place at the altar of Meleagris gallopava. Two days previous to the event was spent dismantling the household, removing living room furniture to the garage or porch in order to jury-rig in their absence a convoy of extra tables and chairs, most employing sawhorses and planks. The planks nailed to the sawhorses in the case someone got rowdy. As it turned out the precise problem of inviting every known DNA vagrant to Thanksgiving, with even odds the rowdy ones will show up.

There was Uncle Fritz who made his living as a carnival sword swallower. Mrs. Uncle Fritz was something else, being the girl on the trapeze, actually it was a tightrope act. She came wearing a dress that appeared to be painted on. As a farmkid unhardened to this apparition, I sorta had a thing for Mrs. Uncle Fritz though I never did know her name. She walked like she was still on that tightrope, her feet crossing in a straight line in front that made her hips do something hypnotic, hence the righteous use of that word. Mama hated Mrs. Uncle Fritz ‘cause she didn’t walk like a Methodist ought. Uncle Fritz could also swallow Thanksgiving dinner pretty much whole so the worst fate in the world was being at the same end of the table as this carnivore.

Thanksgiving at the farm was the culinary equivalent of the Super Bowl. People we really ought not have been be related to showed up to prove once and for all the false pride in the farm’s Pax culinaris, to prove they could out-eat our house and our mama. The dinner table thus was to be likened to the line of scrimmage between the Packers and the Bears, and the reason why the fingers of linemen look like they went through a corn picker. Mama didn’t play fair neither.

To introduce our mama’s nuclear solution for this Thanksgiving invasion, lime Jell-O. Specifically lime Jell-O salad meaning it was an aggregate material same as cement. I do not know what culinary genius brought our mom to this critical insight that you could defuse animal lust and Thanksgiving rapaciousness with lime Jell-O salad. Jell-O salad is after all like eating a vacuum, those colloidal proteins obtained by rendering any suitable dead carcass to gain that famous, lugubrious gelatin. But to add bark and twigs and corn silage and gain the first course, the first-line defense, lime Jell-O salad. Before the trumpets were cued up for the turkey’s pomp-and-circumstance entrance, before the potatoes got mashed, immediately after the prayer was when this heroic lime coagulation appeared.

Prayer at the farmhouse was of the short form. Worst thing you can do at Thanksgiving is to remind participants of starving children in Ethiopia. Mention God perhaps, mention the Pilgrims, but leave Miles Standish and Abe Lincoln out of it, 15 seconds or less. Prayer was the starting pistol of our Thanksgiving, then came lime Jell-O, the serving bowl initially confused with an aquarium with trout and bluegills in it. Basically it appeared as if we were about to consume Lake Michigan, including ferries, fishing boats and alewives.

At this juncture to introduce the dark arts of the farmhouse kitchen. There are leaves and twigs that when eaten in any part or fraction diminish the appetite; aspen buds are known to do this. So too tamarack bark. Hazelnut leaves. Chew on an elm leaf awhile and you don’t feel hungry any more, alkaloids perhaps, bad cooking will also do this. Never to forget the civilization advance that are rutabagas, that when included in any food preparation reduce in the person the zeal to eat, followed by the sense of fullness, then images of Ethiopia. The whole problem with McDonald’s and franchise food is they make every meal taste like Sunday dinner. At a franchise you don’t get a plain hamburger cooked to the likeness of a charcoal briquette companioned by plain boiled potatoes. If fast food was plain stuff, kids wouldn’t get fat. If McDonald’s put Brussels sprouts and lime Jell-O at the top of their menu board, the obesity epidemic would vanish overnight.

Lime Jell-O resembling a cross-section of the Gulf Stream was the first course. Every place setting had a side dish specifically detailed to contain this Jell-O. Mama once read that proper cooks of the tidewater stuff oysters into their Thanksgiving turkey. Since our family too held loyalty to this mollusk, she thought to put on this same sort of high-class style and have oysters at Thanksgiving, at her option in the Jell-O. Curled up autoerotic oysters looking for all like they belonged in an aquarium. Most participants not being of the tidewater cuisine mistook them for rutabagas. Theoretically rutabagas can go with any food and not particularly insult the palate, however this margin of error doesn’t apply to oysters in the Jell-O salad. Oysters in Jell-O will quell a raging hunger same as baking soda on a grease fire. We already knew at this juncture the likelihood of turkey leftovers.

No sooner was the now-empty aquarium dismissed than the second course arrived in a serving dish the size of the Civil War Monitor, the salvation of the farmhouse itself…potatoes. Potatoes are a vegetable to be treated exactly like communism, it is your patriotic duty to wipe them out…destroy them, clean them off the face of the earth. Funny how the whole Cold War thing could have been avoided with a good recipe for Commies.

Before us were heaping bowls of mashed potatoes…because we raised potatoes and the shed was full of them, like as not the cellar also full of potatoes. Every duty-bound farmhouse had a potato cellar else you weren’t properly equipped for winter. Thanksgiving wasn’t possible and excess relation un-survivable without four tons of potatoes stored in a creepy bin in a creepy cellar. Better yet five ton.

Second course was a plateful of mashed potatoes with turkey gravy ladled over in tidal wave abundance. Before every person was a dinner plate rendered oceanic by mashed potatoes and gravy. “Onyawned” was the gravy with a dab of Worcestershire, a hint of garlic and some dry mustard seed. There is in the world such a thing as a connoisseur of potatoes and our mama was a good deal closer than her housedress let on. Potatoes as good, as seductive, as sublime as chocolate silk pie, even finicky eaters ended up eating a continental expanse.

Finally it was turkey time, the heralded moment, but not even Uncle Fritz the sword-swallower was hungry any more. We nibbled at the turkey, nibbled at the green beans, nibbled at the creamed corn. It was a sedate bunch who pushed back from the table a few moments later, to a person ready for a nap. Some of the uncles went out to the porch to smoke and shoot rifles, the women cleared the table and did the first rumor-mongering round of dishes. Any over the age of 50 years just found a corner and tucked in for a nap. An hour later Mama announced it was time for dessert: pumpkin, apple, cherry, peach, mincemeat as is plural for mouse in the Old English lexicon, makes more sense than mice.

At the end we played cards, Methodists weren’t then allowed to play anything wicked like Canasta or Cribbage much less Texas Hold’em owing you might be tempted to wager on the outcome, but Hearts was harmless, besides well-known to be the historical reprisal in card form of the grand duel between Elizabeth and Mary Queen of Scots, represented by the black queen, if Mary was popish, she was a lot better in bed than Elizabeth, the red queen.

The plot of this sordid Thanksgiving episode was our mama’s attempt to prove something real about that bumper sticker, “Farmers Feed the World.” That not only could it be done but to have yet those turkey leftovers. Kinda like the fishes-and-loaves miracle except enough leftovers to have warm buttered toast in the morning. For two weeks we had turkey leftovers that for farmkids employed as farmkids once were, was very kind. While making firewood on a rotten November day, air temp about 20 degrees, snowing wetly, wind NW at 20 mph. To have by a campfire a turkey sandwich with a molten layer of farmer’s cheese wrapped in tin foil, while sitting on a horse blanket. As said, miserable day. Guess what? We were thankful.