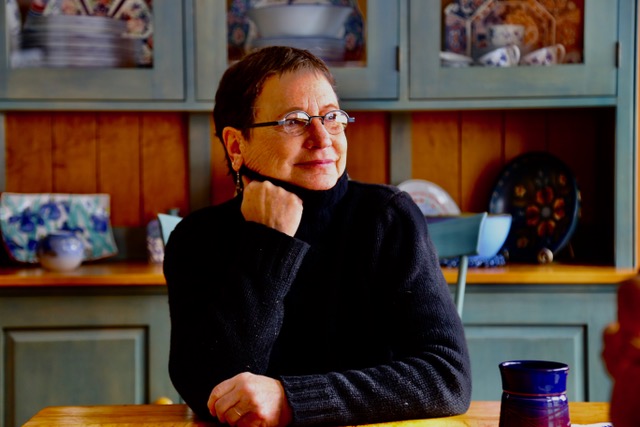 After 23 years serving as the executive director of the Miller Art Museum, Bonnie Hartmann is back to creating her own art, collected in a newly published book of her work in pastels, photography and haiku.

Even decades later, much of her art is still heavily influenced by the time she spent in Japan as an AFS (American Field Service) exchange student when she was just 17 – an experience she describes as “life changing.”

Under the mentorship of an English teacher at the high school she attended while abroad, she learned the aesthetics, sensibilities and beauty of simplicity that are inherent in Buddhism. Those currents still flow through her work today.

“Japanese art has a humility, reverence for nature and simplicity of means unlike any other culture in the world,” she wrote in an afterword to her new book, Wholehearted. “And it’s never varied. It’s always been about less is more. I leave lots of space around things in my paintings.”

This philosophy is reflected in the physical dimensions of the book as well: It’s just six inches by six inches, and 32 pages long.

Two works of a butterfly fluttering near flowers and leaves, placed side by side, emphasize the point. The background of the photograph is dense with shadow, depth and leafy branches. In the pastel, Hartmann frees the background, colors it with blue, and selects only a few gently detailed leaves and flowers to offset the butterfly.

Because they’re dry, pastels are the medium of choice for someone who gets to the studio only occasionally. Hartmann can pick them up to work and stop without worrying about wasting paint.

“The other thing I love about it is that it’s so direct,” she said. “I like that you actually do the mixing of colors on the paper.”

Hartmann leads a tranquil life on five acres south of Sturgeon Bay. But even there, she has not escaped the political turmoil of the past few years, or the mental and emotional aftermath, which she described as “post-Trump stress disorder.” Her book was a response to the larger world.

“I was feeling helpless and hopeless and unable to really do much artwork,” she said. “My mind kept wandering with deep fears and anxieties. I wasn’t sure what I wanted to do about it, but I wanted to do something that brought a bit of life and repose, even for a moment.”

Hartmann spent weeks working through this concept, until deciding to break it into her three favorite means of expression and make a book.

Her pastels are delicate, but detailed images – think veiny plants, light and shadow playing upon leaves, a feather, a tree branch, a nest with eggs and a simple bowl. That style carries over to her photography, and it’s not always immediately clear whether an image is a pastel or a photo. By laying the images side by side, she creates an opportunity for the viewer to investigate and discover.

After stapling together a rough example of the book, she took it to DC Printing on 4th Avenue in Sturgeon Bay.

“I approached Bob Goggins, and he worked with me patiently and in good humor through three drafts and fine tuning,” Hartmann said. “We completed it just before Christmas.”

Before moving to Door County, Hartmann was a full-time artist for several years, represented by galleries in Illinois and Wisconsin. Though she spent the majority of her Door County career at the Miller Art Museum, she has also taught art at The Clearing and at the Peninsula School of Art, where she was director for three years.

Being director of the Miller Art Museum didn’t leave a lot of time for her own artwork, but hanging 172 shows during her career reaffirmed for her the artist’s purpose – best described, she said, by a William Faulkner quote: “The work of the artist is to lift up people’s hearts and help them endure.”

Spending all those years curating exhibitions, educational offerings and creative enrichment in the visual arts also reaffirmed for her the importance of art.

“Think of the world without music, poetry, literature and art,” Hartmann said. “I would say the arts are the gateway to the deepest part of us.”

A Selection of Haiku from Bonnie Hartmann