• Representatives from the Wisconsin Department of Natural Resources and JJR engineers were on hand at a meeting of the Gills Rock Harbor of Refuge Ad Hoc committee March 24. Liat Lichtman presented a draft report of the potential economic impact of the proposed marina. Her preliminary conclusion revealed the proposed marina would have “a small total potential economic impact.” It would result in a maximum of four additional full-time jobs, up to $351,800 in sales, and at most $107,000 in wages and business income. A public meeting will be held April 8 at 5 pm at the Liberty Grove Town Hall.

• The Village of Egg Harbor set a cap of $6.6 million for its marina reconstruction and expansion project. A grant awarded by the Wisconsin Waterways Commission would reduce the cost to $5.4 million. The price was reduced from an original estimate of $7.9 million by cutting back on some of the landscaping and aesthetic enhancements on the breakwater. The referendum on the project is scheduled for May 26.

• The Village of Sister Bay is selling the 3.45-acre parcel commonly known as “Old School Park,” at the intersection of Highways 42 and 57. The old school will be moved off the parcel prior to closing.

For further information or to tour the property contact Robert Kufrin, the Village Administrator, via e-mail at [email protected], or telephone at 920.854.411. Maps and drawings of the site are available at http://intranet.sisterbay.com.

• The village is also selling the former Casperson home (building, not property) at 10707 Bay Shore Dr. as a move off. Bids will be accepted by the Village Clerk through 2 pm, April 23. The village purchased the property next to Al Johnson’s Boutique to add to its Waterfront Park.

• Two former Liberty Park Lodge cottages were moved from north Sister Bay to the grounds of the Corner of the Past in the early hours of the morning March 27. 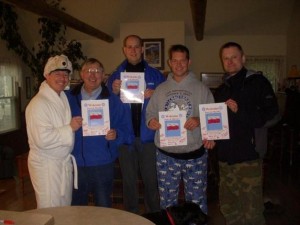 Members of the Jacksonport Polar Bear Club display a memorial statement commemorating their International Polar Bear plunge and visit by members of the “Cold Water Swimmers” Club from Gdansk, Poland. Guests from Poland will take their copies back to share and display in Gdansk.
From left: Jon Jarosh, Joe Jarosh, Marcin Wlaz, J.R. Jarosh and Piotr Wozniak.

The buildings will be renovated and preserved by the Sister Bay Historical Society. One cottage will be set up as a display to represent Door County’s cottage industry. The other building will serve as an office for the society. The cottages were donated by James Annoye.