Ever since I began learning to be a teacher in 1949, I’ve had the nagging compulsion to want to know the name of every plant, animal, bird, insect, stone, fossil, etc. I came upon in the wild, and the older I get the more entrenched this yearning becomes.

Now, with the delightful “quiet time” upon us, our hikes into the woods take us to where the greenest of mosses and ferns grow and often which need positive identifying, but so vibrant in color are they while many other species have already turned brown and died back to the ground. A feature we greatly admire of most ferns is the rather demanding set of growing conditions for each particular species. We treasure being privileged to walk in their delicate environments.

There are two large fern species very common in Door County, the Marginal Shield and Spinulose Shield, which retain their striking greenness throughout the snowy season. Florists learned many years ago that Spinulose Ferns could be collected and stored in great quantity and be successfully integrated into their winter floral arrangements when green “fillers” were difficult to obtain. These people in turn refer to this fern as the Florist’s Fern. 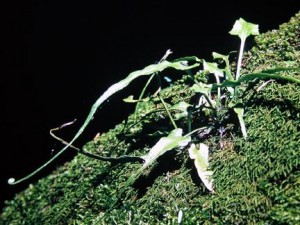 There is another fern, the Christmas Fern, very rare in Wisconsin but common to the east and especially south, which remains green all year long. Yes, florists also have made heavy use of this species where it is more abundant, often to the detriment of its ability to sustain itself.

In the mid-60s I checked with Mr. Emil Kruschke, then the curator of botany at the Milwaukee Public Museum, to find that all three Christmas Fern sites in the state had deteriorated and that those ferns were considered to be non-existent in Wisconsin. Then came a late fall day when friends and I decided to try our luck at finding some edible mushrooms in western Kewaunee County, southeast of Luxemburg. Our mushrooming failed but suddenly we began seeing some unusual ferns which turned out to be the rare Christmas Ferns, dozens of them, perhaps as many as 150! Later another site was discovered in Sheboygan County. The leaflets (pinnules) of the Christmas Fern look somewhat like blunt-toed Christmas stockings hung on the mantel.

Another productive fern day occurred Oct.15, 1973 when I was teaching environmental education classes at Sevastopol School. A hike into the school woods revealed seven different species of ferns including (surprise, surprise!) the rare Christmas Fern, the only known site of this species in the county. Why so few and very widely-scattered sites for this fern exist in Wisconsin remains a mystery to state botanists.

There are several other fern species considered to be evergreen that grow very sparingly in Door County, the Maidenhair Spleenwort, Green Spleenwort, Walking Fern, and the Common Polypody or Rock Cap Fern. The later, being rather leathery green in texture and color, is by far the more common while the extremely rare Green Spleenwort, having light green leaves, green stipes, and appearing like a miniature Maidenhair Spleenwort, has for many years been known to grow only at one site in the state, on Washington Island. I’ve known about the site for many years but, unfortunately, the last time I looked for it I couldn’t find a single specimen.

The very dainty and distinctive Maidenhair Spleenwort is also extremely rare in the county, often growing in a thin layer of moss hugging a vertical limestone outcropping. This fern, having purplish-brown stipes (or stems), prefers cool sites where moisture and shade are common. Unfortunately the best site for this fern that I know of is along a public hiking trail where recently I discovered many huge patches of the moss torn loose and most of these ferns missing from the scene. Unfortunately I cannot prove whether their disappearance has been due to ignorant human disturbance or downright thievery. It’s been known for a long time that this little fern is considered to be exploitably vulnerable. All I can say is that we will continue to thrill at the beauty of the few remaining specimens as long as they endure.

There is another fern, always very rare and local, the Walking Fern, which used to grow in the very same public hiking site along with the Maidenhair Spleenwort Ferns. Sadly every specimen has been torn away and removed from their delicate moist and shady microhabitats. Where just a few years ago one could enjoy several dozen of these ferns existing nicely here, today they’re all gone. 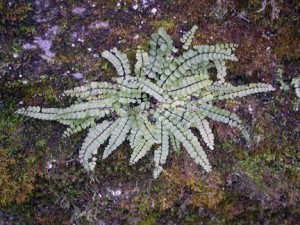 Fortunately we have two very sensitive friends with outstanding outdoor savvy, who know wild plants well and who discovered a small site where the Walking Ferns grow near their home in northern Door. A typical habitat of this extraordinary fern includes the Sugar Maple, Basswood, Balsam Fir, Eastern White Cedar, and Mountain Maple trees, the Common Polypody Fern, Fragile Fern, Maidenhair Spleenwort, Herb-Robert, and several different mosses, such as the gorgeous Rose Moss, providing the moist moss mats which appeal to the Walking Ferns.

The mature leaves of this fern are long, narrow, pointed, and the arching leaves often radiate star-like from their rootstalk. Often those tips of the longest leaves, sometimes six-to-12 inches long, produce little coils at their very ends, touch the moss-covered rock surface and sprout into tiny new Walking Fern plants. In other words, the plants have slowly “walked” across their environment producing offspring along the way. The plants are said to proliferate through “root tipping.” Eventually an ideal habitat may contain many plants.

The only way these rare fern species, including the Maidenhair Spleenwort, Green Spleenwort, Walking, and Christmas will continue to exist is by protecting their habitat from major disturbances. Add a new dimension to your life by becoming more acquainted with the ferns. This is an ideal time of the year to do so, even though you may have to wear blaze orange while in the woods. Your attitude toward your natural world will be greatly improved as will your sense of wonder. Ferns are truly spectacular plants.

To discover nature at her finest, to search for and find and feel natural beauty, is to many one of the greatest and most rewarding privileges in life. To ensure that future generations may enjoy the same things, including the rare ferns, should be a high priority for every citizen of this great country! Become a true “partner in nature.”