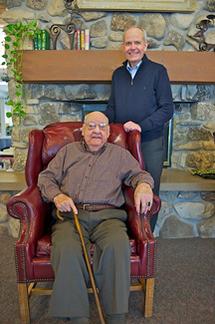 Clyde Casperson (left) took over the family business from his father Edwin, then passed it down to his own son, Greg (right). Casperson’s Funeral Home is beginning its 90th year at the same location in Sister Bay. Photo by Paula Hedeen.

For 90 years, the Casperson name has been synonymous with the funeral home that carries it. Today, as Clyde Casperson nears his 90th birthday, serving the community in times of sorrow remains the family business.

The business got its inspiration in the early days of the 20th century, when there were no hearses (or funeral cars, as funeral directors prefer to call them) in Door County. Caskets were simply loaded into wagons for the trip to the cemetery, something that struck Edwin Casperson, Clyde’s father, as disrespectful.

Then the caretaker of Chambers Island, Edwin bought an old funeral coach during a trip to Menominee. It had wheels and sleigh runners, and he sent it to his wife Julia’s parents on the August Johnson homestead in Ellison Bay, where Shepherd of the Bay Lutheran Church is now located. He told them to make it available to anyone who needed to use it.

In 1921 Edwin decided, since he already owned the coach, that he might as well provide funeral services, and a family business now in its ninth decade had its start the same year Clyde was born. Casperson Funeral Home (the second in the county to Hahn’s of Sturgeon Bay) was established on the site it still occupies just north of Al Johnson’s Restaurant in Sister Bay.

Just after Clyde graduated from high school, his father died. Clyde’s cousin, Orin Hanson, had been sent to school by Edwin to become a licensed funeral director, and Orin and Julia operated the business for the next few years. After earning his license and serving in the Navy in World War II, Clyde joined them, and began filling other roles in the village.

He helped establish the village’s first fire department after WW II, and he served the department for 25 years – 18 as its chief. He was the charter president of the Sister Bay Lions Club, a position later held by his son, Greg, and together they were honored with the Lions Club’s Melvin Jones Fellowship Award for volunteer service and humanitarian work.

For several years after the war, Casperson’s was the only ambulance in Door County.

“All the calls came to the funeral home,” Clyde says, “because, except for the police, we had the only telephone in Door County that was answered 24 hours a day.”

Doctors used to rely on Casperson’s to keep in touch with them when they were out of the office. “They’d call and tell us where they were going to be,” Clyde says, “and ask us to notify them if there was an emergency.”

Clyde loved to take his young sons fishing on the bay, but his dual roles as fire chief and ambulance driver demanded he be available on a moment’s notice. If a call came in, his wife, Mila Jean, would run down to the dock and turn the flag upside down. That meant that fishing expeditions always had to be within sight of the flag.

Casperson’s handled all the funerals on Washington Island. They had a building there to store caskets, a funeral car and a portable embalming table.

“Embalming was done in the home in the early days,” Clyde says. “We’d take care of the body in a bedroom, and then display it in the living room. There was always a three-day wait before the funeral, because it took time for out-of-town relatives to arrive.”

Getting to Washington Island in winter was a challenge. The Coast Guard took Clyde over and back in an open boat, the only one in the United States with a stainless steel shaft and propeller, rather than bronze, because steel could cut through the ice more efficiently.

Many of Clyde’s most unique recollections are related to the island, including a tragedy still etched in Door County lore. In 1935, five men from Washington Island traveled to Ellison Bay for a pick-up basketball game at Pfiel’s Hall, now the Mink River Basin. They decided to take a shortcut close to Plum Island on the way home and went through the ice. Eyeglasses were found on the ice, indicating that one of the men managed to escape from the car and tried to pull himself to safety. The other four bodies were recovered from inside the car. Clyde, then a teenager, helped his father prepare for their funerals.

Clyde’s most unusual experience involved a retired librarian who had gone to Rome to help catalog the Vatican library. Informed that his wife had passed away, he called Clyde and asked if her body could be held until he returned. After embalming, she was placed in a steel vault. At that time, there was no trans-Atlantic plane travel, so Clyde expected it would be awhile before the husband returned. “Awhile” turned into seven or eight months.

The deaths of children and teenagers are always hard to deal with, Clyde says. He remembers particularly well the night after a school dance when three young people were killed going around a curve near Liberty Park Hotel north of Sister Bay.

“Often,” he says, “the police asked me to go along to notify the families of the victims, because I knew them personally. When our teenage sons were out for the evening, it was terrible to get a call saying a boy had been killed, with no information about who it was.”

Casperson’s first motorized hearse, purchased in 1930, was a large-body Model A Ford truck with big glass windows on each side. Even motorized vehicles had problems on early Door County roads in the winter, such as during the ordeal of a Washington Island man whose appendix ruptured. The Coast Guard brought him to Northport (long before the dock existed), and a nearby farmer named Stanley Landin loaded him into a sleigh to meet the ambulance in Gills Rock.

“Two snow plows, linked with logging chains, were chained to the front of our ambulance,” Clyde remembers. “Every time one of the plows moved, the ambulance was jerked forward. It took all night to get the fellow to Sturgeon Bay – 24 hours, all told, since he left home. He was alive when we got him to the hospital, but died within a week.”

Casperson’s turned their ambulance service over to the county in January of 1976. The previous month, Greg had married Deborah Carlson, who was happy that he would no longer be on the road five or six nights a week with hospital runs or making trips to funeral homes in Chicago and St. Louis.

Greg planned to teach when he graduated from Carthage College, but with his father’s health failing, the family business called. Greg went to school in Indiana to get his license and became the third generation of Caspersons to serve Door County.

“It’s a job for someone who loves being with and talking with people,” says Greg, who has taken his father’s place as Sister Bay’s rock in tough times. “We work with such a tremendous cross-section of folks here. Many continue to think of Door County as the small rural community it was 30 or 40 years ago, but we’ve had a funeral with flowers from the U.S. President and Congress and worked with the head of General Motors and the vice president of United Airlines.”

He says that funerals have changed with the times.

“Cremation is becoming more popular, and services, once dictated by the church and clergy, are now more personalized. We’re still honoring the person who passed away,” Greg says, “but now there’s more focus on comforting the survivors and helping them to get on with their lives. Some people think it must be very difficult to talk with grief-stricken families, but knowing them personally makes it easier.”

Clyde estimates that Casperson’s has handled almost 9,000 funerals. For three generations and 90 years, the Casperson’s have helped the people of Northern Door, their neighbors and family, through their most difficult moments.

At the Sister Bay Bowl, where the fish fry is king, there’s a special order not featured on the menu. It’s “The Clyde,” a double helping of perch, without sides, created when Clyde Casperson was experiencing heart problems. His doctor told him to “eat all the fish you want, but lay off the other stuff.” Clyde took him at his word, and when his friends complained that his perch plate was better endowed than theirs, he said, “Oh, this is the Clyde special,” and the name stuck.