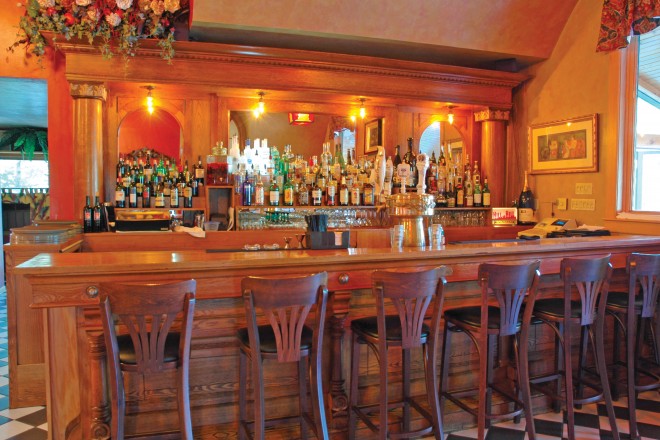 Polishing off the final bites of my Roasted Maple Leaf Duck with a Door County cherry Bigaraude sauce, my reluctant inheritance of my father’s pun-laden sense of humor rears its head. “heavenly” I mutter. Though the word play proves irresistible as I eat dinner at the Mission Grille in Sister Bay, I manage to spare my server what she has undoubtedly heard hundreds of times and keep quiet my proud chuckle. Where my fellow diners and I now nosh on Seared Sesame Tuna and sip berry-infused martinis, a priest once dispensed Communion wafers and wine to his parishioners. From 1912 through its sale in 1984, St. Rosalia’s had served the county’s Catholic community on this site as its oldest church and mission. When Gary Guterman purchased the building in 1984 with the vision of opening a restaurant, the mission would become the Mission Grille. Located at the intersection of highways 42 and 57 in downtown Sister Bay, the Mission Grille occupies an utterly unique space in both the landscape and the history of Door County.

In its early days St. Rosalia’s was housed in a small, simple, white clapboard structure. Hertha Kodanko, a parishioner since the 1930s, recalls that there was a barely-there entryway opening up to two rows of pews that sat perhaps six people on each side. In the summers when the county’s population is known to swell, mass was often held with standing room only. In the mid-1950s, St. Rosalia’s expanded upon its original site to accommodate the growing number of worshipers. Mrs. Kodanko recalls the addition of a small room added on the north side, open in the summers for overflow seating; an entryway with minimal storage; and even a small kitchen off the back of the church which allowed, among other things, the women’s group to meet onsite. The clapboard exterior of the church was also refinished with “good-idea-at-the-time” asbestos shingles.

In the nearly 30 years following the remodel, St. Rosalia’s continued to grow, stretching both its interior and exterior confines. In response to the church’s expanding needs, the Catholic Diocese decided to construct a new, larger building to house St. Rosalia’s. The current St. Rosalia’s held its inaugural mass on September 9, 1984 in a church just a few blocks south on highway 42 from the original site.

While Gary Guterman purchased the church structure in 1984, he initially left it untouched and returned to his home in Chicago. The building nearly changed hands again when Guterman’s hopes to open a Mexican restaurant were thwarted when he was unable to obtain a liquor license. Guterman held on to the land and the intention to open an eatery and finally in 1989, the structure was remodeled and opened as the Mission Grille. At the time, only minimal changes were made to the church. The inside of the space was reconfigured and the asbestos shingles were promptly replaced with friendlier siding. The Grille, in its first life, was a lively 50s-style diner. Where the alter once stood there was an arcade and four large pool tables included and an old-style soda fountain was situated under the choir loft. Mrs. Kodanko recalls being taken aback to see arcade games where the priest had married her children, but Guterman says the majority of reactions to the church cum restaurant were positive. The Grille was full of authentic 50s paraphernalia; Guterman lights up talking about his jukebox and a vintage Harley motorcycle in a glass case, all the “real deal.” The restaurant existed as a page out of Gary Guterman’s youth for four years until he says a calling to create better food prompted the old church building’s next incarnation.

In 1993, the Mission Grille underwent some more extensive renovations in turning the building into the fine dining restaurant it is today. Most importantly, the kitchen was enlarged from a mere 169 square feet to upwards of 800. A covered but open front porch changed the façade of the Grille and added more space for outdoor dining. However, despite the changes, Guterman says the original church building was in “good shape”; and throughout the process of remodeling, the goal was to retain the basic architecture of the space and to avoid any extensive structural changes. Inside the Mission Grille, it is still easy to see reminders of St. Rosalia’s threaded through the warm, inviting interior. On the wall in the entrance of the restaurant hangs an enlarged print of a postcard from 1912 showing the church as it first stood. The lights that hang from the vaulted ceiling are those that hung over the pews, and some of those very pews still reside in the Grille, in a small private room in the main dining room, affectionately referred to by the staff as “the sanctuary.” Guterman says that a customer once told him lightheartedly, “These pews have never been so comfortable.”

While St. Rosalia’s was a very simple church, devoid of stained glass, Guterman has added that touch to retain ties to the building’s past. The majority of the stained glass, including that which separates the main dining room from the smaller “jazz” dining room, was brought in from Calvary Church in Oak Park, Illinois. The more ornate stained glass throughout the restaurant was custom made locally by an artist in Sturgeon Bay. Above the nameplate adorning the front of the Mission Grille look for a gorgeous, colorful stained glass window filtering light from inside after dark. There are many elements of the church’s architecture that lend to the ambiance and uniqueness of the Grille; the steeple still rises from the rear of the building, and the high ceiling is curved above the bar area and the entrance to the front porch. The choir loft was also turned into a dining area, often used for private parties with a wonderful view of the entire restaurant.

The front porch was enclosed in 1996; for as lovely as Door County summer nights can be, they are also fickle. The Mission Grille has garnered a lot of attention for the building it inhabits, but for the past decade, it has also been Gary Guterman’s goal to create a restaurant that will stand on the merits of its cuisine and standard of service. To say that he has been successful would be the proverbial understatement. In 2001, Gourmet magazine named the Mission Grille one of the 12 best restaurants in Wisconsin. The cuisine, described by Guterman as “new American,” is ever-changing, encompassing a variety of ethnic influences, and follows trends from some of the country’s culinary leaders as well as evolving health trends. The duck I mentioned earlier is always on the menu, along with a wide variety of steaks and changing fish specials flown in fresh from all over the country including Alaska and Hawaii. The liquor license is not an issue any longer either, in fact far from it. The Grille has a full bar (a Brunswick antique from the late 1800s, more “real deal”) with signature martinis and a variety of single malt scotch. Furthermore, the Mission Grille was the first Wisconsin restaurant north of Kohler to receive the Wine Spectator Award for their expansive wine list. That award has been reissued to the Grille for the past six years running. With over 375 wines on their wine list, Guterman hopes to offer an opportunity to experience new selections. And while the number of wines on the list can be overwhelming, Guterman says, “it’s not a museum, we really want people to enjoy wine.” It is easy to believe that philosophy when it is coupled with devotion to friendly, knowledgeable service.

Mark Mogilka, the director of pastoral services for the Catholic Archdiocese of Green Bay, says while there is no specific rite or ritual to re-designate a church building for non-religious use, there is a Cannon-law process to relegate the functions of a church to its new location. St. Rosalia’s has spent nearly 20 years in her new home, but a piece of the history that it shares with Door County lives on in the Mission Grille where a couple can celebrate their anniversary dinner under the same roof where they were married. Gary Guterman and his staff’s treatment of this historical site is a study in respecting the legacy and integrity present in the county’s architecture, all the while developing their own history.

The Mission Grille is open year round

Summer Hours from mid-March through the end of October: Lunch from 11:30, Dinner from 5:00.

Winter Hours from November through mid-March: Open for Dinner only Thursday through Sunday nights.