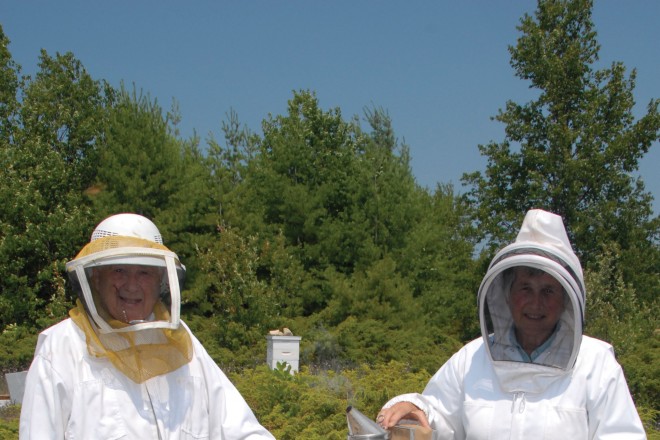 Ray Bradbury once asserted that all bees have a smell. And if they don’t, they should for, “their feet are dusted with spices from a million flowers.”

I roll this thought around in my head in slow motion, as I listen to the low hum of thousands of bees circling the three of us. We are not intruding on their business, not causing any hiccups in the process; we are merely observers, witnessing with awe, one of nature’s tiniest and most efficient factories:  the bee hive.

Here, on Gary and Ann Norzes’ 80-acre farm just outside Fish Creek, I am fully suited from head to toe, on a beautiful July morning, receiving an insightful education on one of the world’s most ancient practices for gathering honey.

“Honey is a food that is forgotten,” Gary Norz says simply with a twinkle in his eye, although I can clearly see that here, it is not. For Gary and Ann, keeping bees has been a hobby for more than 40 years. A hobby, that is, which requires passion, work, and an appreciation for nature’s innate rhythm.

“The reward of the honey at the end is nice,” Ann explains, “but seeing such a tiny happy insect humming in the spring and enjoying the flowers, and watching the stages of their life unfold is the real pleasure for me.”

The stages of beekeeping begin, as most nature does, with a mother. The queen bee. All manmade beehives are organized in a box-like tower and layered with different stages, which change and grow as the population of the hive does. At the base is the brood box, or lower story, of the hive and, incidentally, where the queen holds her court.

When a beekeeper begins a hive, he or she can send away for “package” bees. The package is made up of the three types of bees in a hive:  one young queen, young worker bees, and a few drones. They arrive in a boxed, screen cage with the queen in her smaller, screened-in quarters   surrounded by the others. In C.P. Dadant’s book, First Lessons in Beekeeping, it is explained that “the queen is the only perfect female in the colony and is the true mother of it. Her only duty is to lay the eggs for the propagation of the species.” After about five or six days of life, the queen emerges from the hive and is fertilized by a male drone bee while in flight. Once she is fertilized she returns to the brood box and remains for the entirety of her life producing more and more bees.

With the majority of their hard work done, the drones attend only to the queen, and do not participate in the making of honey. The all-female worker bees begin pollinating, making beeswax, and eventually honey.

“We have come to call our worker bees, ‘my girls,’” Jave Hughes says with a sweet giggle. Hughes, a first season beekeeper, became interested in the process when she came across beekeeping while studying Medieval British history in college. It popped up again while reading Sue Monk Kidd’s widely popular novel, The Secret Life of Bees. “I found myself more interested in the process of keeping bees than I was in the story,” she said, and after 12 years of organic gardening and becoming well acquainted with growing and creating one’s own food, she decided she was ready to try her hand at beekeeping.

The process becomes easier once the lower brood boxes become filled with bees. They then begin to create wax and honey. The next layers, called honey supers, are added. The supers are cubes comprised of a series of frames that sit in the box vertically. These frames support the area that will be the foundation for the bees to create wax honeycombs. The bees will journey out from the hive to find nectar and pollen and deposit the honey into the honeycomb and cool it with their wings. Once the honey has been deposited into the small cell, the bees “cap” that spot off, preserving a perfect honey pod. All of the frames can be pulled out for inspection of progress and eventually for honey extraction without disturbing the bees.

Max  Martin, another local bee-keeping  hobbyist, became interested as a child after watching his uncle who kept approximately 150 hives. “It’s fun to see a hive take off. You start with only a couple hundred bees, and in the end, there’s 10,000 to 15,000 bees and hundreds of pounds of honey. The explosion of it all is really amazing,” he says. In the fall, to celebrate, Martin has a harvesting party that is attended by at least 100 people interested in the honey.

When asked about the greatest challenges of beekeeping, Martin explained that it was keeping them free of mites and parasites, and chuckles as he says, “also enjoying a sting every once in a while.”

Bees in their natural state are extremely docile, so docile in fact that Jave Hughes has never needed to use a smoker, a device used to calm the bees. They have little desire to sting unless threatened. Once a honeybee stings a human, they lose their stinger and the muscles in their lower abdomen to the sting site. In its ultimate act of aggression and defense, the sting, in turn, kills the bee. It is no wonder though, after handling hives and moving around heavy frames and supers, that a bee may feel concerned and threatened, and sting the intruder.

Ann Norz also recalls getting stung five or so times, but she quickly cites, “Most of the times that I was stung, it was my fault. I had not been attentive or careful enough in that particular moment.” Another occupational hazard, though much less common, for the Norzes was a black bear. Gary recalls readily the morning many years ago that a black bear crept to their hives and destroyed them to get the honey. According to Gary, any interested parties can visit that very black bear at the Nature Center in Peninsula State Park where his honey-nabbing paws remain permanently stuffed.

Max Martin thoroughly enjoys his hobby, despite the occasional sting, as he gets up every Saturday to check on his bees and their progress. I asked him early in our conversation why he decided to try beekeeping. “I love honey,” was his simple and self-explanatory response.

A frame can be harvested once the supers are filled and all the wax honeycombs are filled and capped. An important piece of equipment, the bee escape, is used as a one-way exit for the bees so that once they leave the super they cannot return to that area, making it safe to take out. The next step is to scrape the beeswax off with a hot knife to uncap the honey. Many beekeepers, including Gary and Ann Norz, use beeswax at home to make candles. The honey is scraped into a large machine, called an extractor, which spins, causing the honey to drip to the bottom. One full super from a hive can yield up to approximately 100 pounds of honey and sometimes more.

However, around the rest of our country honey harvesting has not been as successful. There is much buzz and concern about the sudden drop and seeming epidemic that is affecting honeybees and their hives. While it is unknown what exactly has caused this widespread decline in bee populations, many scientists have theories that involve mites, parasites, and some have far more mysterious and ominous suggestions and theories as to what may be causing the disruption

In Door County, all beekeepers that I spoke with had happy, healthy apiaries, or bee colonies, and reported no sign of any danger or fear for their populations – save one. Local organic farmers, Russ and Linda Cockburn, have attempted hives two years in a row and have run into snags both times. Their organic farm seems a natural place to start a hive as it is surrounded by organic crops, beautiful wild flowers, and forest. Linda believes one possibility regarding their colony may be the interference of local radio towers, another theory some scientists hold. “Bees do a dance when they emerge from the hive to communicate to other bees where they should go for the best nectar and pollen,” Gary Norz explains. This amazing “dance” leads bees up to five miles from their hive. Radio towers, and even large-scale GPS units, can interfere with their journey home, many biologists assert, causing the failure of a hive.

But for most in Door County, these theories and speculations seem far, far away. There is only the happy humming of the bees and the glistening jars of gold lined up at the local farmers markets. Most local beekeepers use their harvested honey for personal use or give it away to friends and families.

I happen to be one of those lucky people. As I sat in my car that July morning with homemade beeswax candles in one hand, and a jar of Norz Apiary golden honey in the other, I found myself a bit side swiped by all the information I had acquired in those short hours.

Consider for a moment, again, Ray Bradbury’s notion of bee’s feet. Honey then, is a living thing. A thing made of the wildflowers, the wind, the nectar of flowers, and the drumming of wings. Nature’s oldest and most beautiful sweetener is alive and well here in Door County. Alive, golden, and certainly not forgotten.

Combine soy sauce, honey, chili sauce, garlic, and black pepper. Add chicken wings to mixture and toss to thoroughly coat. Arrange the chicken in the bottom of a 9 x 13 baking pan and bake at 350 for one hour turning once or twice only. Allow to cool and serve with bleu cheese, ranch, or honey.